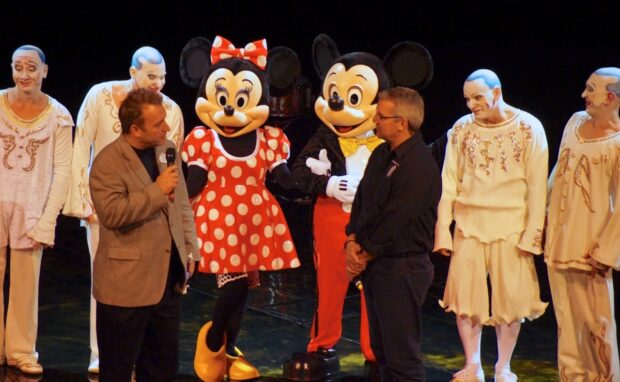 La Nouba, the Cirque du Soleil show at Downtown Disney, celebrated its 15th anniversary with a special visit from Mickey Mouse and Minnie Mouse, appearing for the first time on the Cirque stage.

Since opening on Dec. 23, 1998, La Nouba has performed more than 7,000 shows to more than nine million guests. With an international and diverse cast of 65 performers, the show features funambulists, dancers, tumblers, trapeze performers, a juggler, clowns, actors, acro-gymnasts, cyclists, musicians, vocalists, skippers and circus artists. More than 20 percent of the original cast is still performing in the show, including trampoline artist Alexander Danilchenko, who has not missed a show in 15 years.

“We are proud to celebrate one of our longest running shows and are grateful to the dedicated artists, crew and staff of La Nouba who continue to wow audiences. What a fantastic milestone to share with our partner Disney,” said Cirque du Soleil President Daniel Lamarre.

The relationship between Cirque du Soleil and Walt Disney World is a collaborative one that dates back to the show’s inception. La Nouba, which comes from the French phrase “faire la nouba,” and means to live it up, was created exclusively for Walt Disney World. Design teams from Cirque du Soleil and Walt Disney Imagineering worked together to create the show’s unique freestanding theatre, the first ever to be built for a Cirque show.

“We’re thrilled to celebrate 15 years of La Nouba with Cirque du Soleil,” said Keith Bradford, vice president of Downtown Disney. “With its vibrant characters and diverse performers, the show remains as fresh and magical as ever and continues to enhance the Downtown Disney experience with an incredible theatrical experience our guests will always remember.”

Movie Review: Saving Mr. Banks is a must see for teens and adult Disney fans