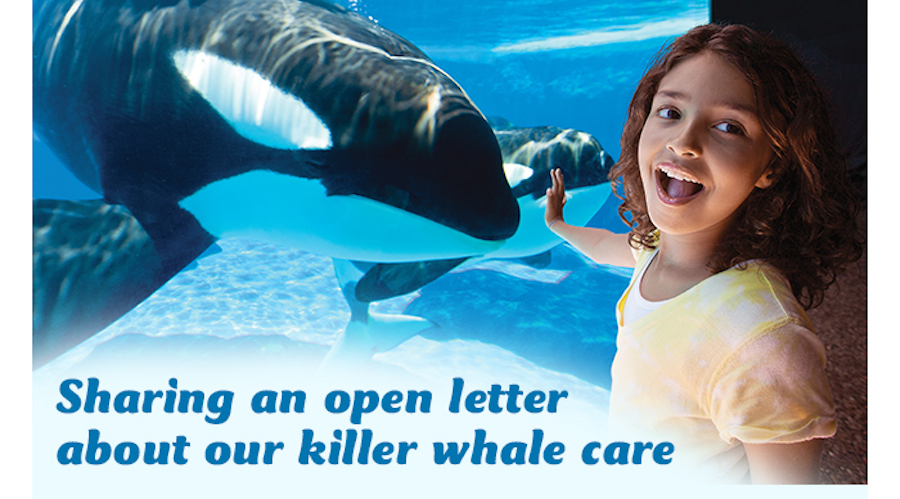 On Nov. 21, 2013, SeaWorld Orlando announced some of the musical acts for their 2014 Bands Brew & BBQ festival. Since then, nearly all of the acts have canceled their appearance, citing SeaWorld’s treatment of killer whales, or their fans’ complaints against SeaWorld after seeing the movie “Blackfish”, which features interviews with some former trainers and animal experts. SeaWorld Parks and Entertainment has been pretty much silent about the situation, only saying they’re rebooking the bands who were misinformed and canceled. But today, they’ve released an open letter about the situation and their care of killer whales. Here is the letter in its entirety:

SeaWorld: The Truth Is in Our Parks and People
An Open Letter from SeaWorld’s Animal Advocates

Inaccurate reports recently have generated questions about SeaWorld and the animals in our care. The truth is in our parks and people, and it’s time to set the record straight.

The men and women of SeaWorld are true animal advocates. We are the 1,500 scientists, researchers, veterinarians, trainers, marine biologists, aquarists, aviculturists, educators and conservationists who have dedicated our lives to the animals in our care as well as those in the wild that are injured, ill or orphaned. Whether it’s a sea lion, manatee, sea turtle or whale, we are on call 24/7.

Here are some important facts about SeaWorld and our work:

• SeaWorld does not capture killer whales in the wild. Due to the groundbreaking success of our research in marine mammal reproduction, we haven’t collected a killer whale from the wild in 35 years. In fact, only two of the whales in our care were collected by SeaWorld and they continue to be in our care today. In addition, our research has led to a much greater understanding of whales in the wild, giving researchers important scientific insights surrounding marine mammal reproduction.

• We do not separate killer whale moms and calves. SeaWorld recognizes the important bond between mother and calf. On the rare occasion that a mother killer whale cannot care for the calf herself, we have successfully hand raised and reintroduced the calf. Whales are only moved to maintain a healthy social structure.

• SeaWorld invests millions of dollars in the care of our killer whales. In the last three years alone, we have invested $70 million in our killer whale habitats and millions of dollars annually in support of these facilities. Our habitats are among the largest in the world today. They are state-of-the-art, multimillion-gallon environments of cooled and filtered water that allow for the highest and safest standards of care. We give our animals restaurant-quality fish, exercise, veterinary care, mental stimulation, and the company of other members of their species.

• The killer whales in our care benefit those in the wild. We work with universities, governmental agencies and NGOs to increase the body of knowledge about and the understanding of killer whales — from their anatomy and reproductive biology to their auditory abilities. Some populations of wild killer whales have been classified as endangered or threatened, demonstrating the potential critical nature of these research opportunities. This type of controlled research and study is simply not possible in the wild, and has significant real-world benefits to the killer whales that live there.

• SeaWorld is a world leader in animal rescue. The millions of people who visit our parks each year make possible SeaWorld’s world-renowned work in rescue, rehabilitation and release. We are constantly innovating when it comes to this care: Our veterinarians have created nursing bottles to hand-feed orphaned whales, prosthetics to save sea turtles, and a wetsuit to help injured manatees stay afloat during rehabilitation. Whether it’s the result of natural or man-made disasters, SeaWorld is always on call and often the first to be contacted. We have rescued more than 23,000 animals with the goal of treating and returning them to the wild.

Naturalist Baba Dioum put it best when he said, “In the end we will conserve only what we love; we will love only what we understand; and we will understand only what we have been taught.”
At SeaWorld, this has been our calling since we first opened our doors 50 years ago. It is a responsibility we do not take lightly. More than 400 million guests have visited SeaWorld. We are proud that their experiences here have a lasting and positive impact on them, and on the world in which we live.

The truth about SeaWorld is right here in our parks and people. Our guests may enter our gates having never given much thought to the remarkable animals in our oceans. When they leave with a greater appreciation for the importance of the sea, educated about the animals that live there and inspired to make a difference, we have done our job.

Wow..This is very interesting..This is what I can say about this place where millions of people go each year…amazing…teaches and trains us…not everything in life with mammals or animals will you never get hurt they have feelings too so they will let you know how they feel thru expressions ..As far as ppl that work at Sea world yeah I am sure they are not in anyway hurting or trying to be mean or not taking the time to do there job right! So bands pull out really go ahead but that is ur choice until u know for sure and seen it without hear say..don’t jump…cause they are well taken care of better than most ppl I know…amazing how ppl can be so cruel..in this world amazing….paparazzi meets celebrity. .that’s what this world is anything meant bad to someone to make someone else happy..sad sad world…keep ur head high Sea World…….

This is such crap. Do you work for sea world or just an idiot?

I’d like to throw you in a prison, make you do tricks, and claim that I’m doing it for educational purposes. Oh, and I can also say that you’re being well taken care of.

They may not have used killer whales from the wild but that hasnt stopped them trying to get wild belugas or others http://bit.ly/19Yacvh

Once I wanted to be a Marine Biologist because of Sea World. Since that never came to fruition, I have spent my whole life **supporting** the work Sea World does because I know and have always known that Sea World was good.

Do not let these fools and liars get you down. Keep doing what you are doing. Keep working to give our future a glimpse of what once existed in the past.

If this is all true, why did it take SeaWorld this long to say it?

They probably just didn’t want to acknowledge that movie.I mean it wasn’t a all that advertised I mean why advertize something by fighting against it but since it is now affecting them and was starting to pose a threat against what all they do so now is a time to try and fighting it

Sometimes silence is your strongest argument. I teach my children, if you know you’re right there is no need to argue…possibly SeaWorld didnt want to have a debate. Personally I think the bands are too worried about a few fans being mad and didnt bother to research the situation to make their own choices…support of SeaWorld is something I plan to continue…even before this open letter.

I support Sea World! It appears apparent that CNN is race baiting. The killer whale / orca is a mammal. It is not a fish! It breathes air. It is black and white. Why after the unfortunate death of a trainer does it have the title “Blackfish”? I think CNN should be liable for slander! Someone should speak up for the mammal.

I’m not sure what side to be on. The movie was very one sided, but they made a lot of good points about Shamu’s upbringing.

At SeaWorld Orlando there is a small pool (about 50ft by 30ft) where they were once showing a pair of dolphins (a mother and her calf). There was a team member answering questions about the beasties, and I was watching them for a while. Since it was the end of the day, I asked the team member how did they get the dolphins back into a lake or larger resting place for the night. She said there is no such thing, they stay in that pool all the time. Mind you, these dolphins could swim a lap in that pool in less than 10 seconds, it was so small I couldn’t fathom that they would be stuck in that little pool all the time, so I asked again, when and where they would go once they got out of there (thinking they would be kept in that pool for a week or so as “exhibits” and then returned to a larger environment. The cast member said they would spend at least three YEARS there. I was shocked. I had to go into a corner and sit down because I was about to cry. I couldn’t believe it. These animals were in jail, pure and simple. It was torture. Three years in a space that is very much comparable to a gold fish in one of those small bowls. I swore off SeaWorld forever. I had just bought an annual pass, which I never used again, and didn’t renew, and will never spend another dollar at that park.

A look at what Orlando’s theme parks...