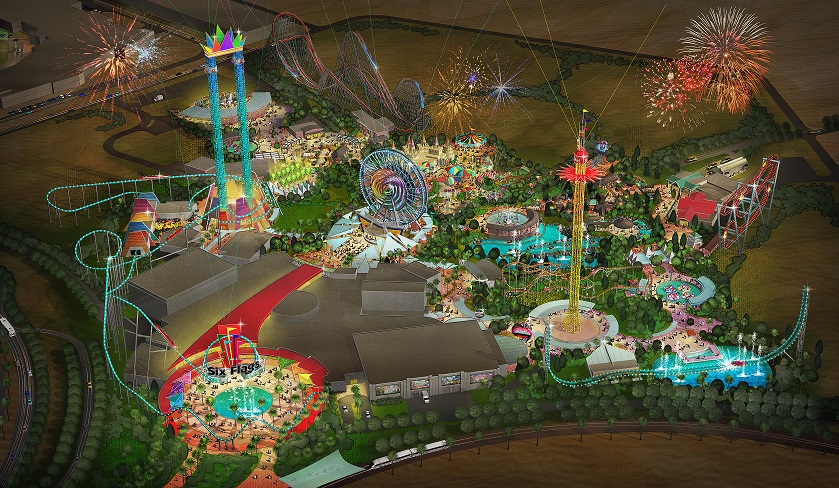 Construction has commenced on Six Flags Dubai, which will be themed around earlier Six Flags parks.

Dubai Parks and Resorts announced on July 3 that ground has been broken on Six Flags Dubai, which will be the destination’s fourth theme park and the first Six Flags park themed around other Six Flags parks.

Planned to open in late 2019, Six Flags Dubai will will include 27 rides and attractions for all ages across six themed zones; Thrillseeker Plaza, Magic Mountain, Fiesta Texas, Great Escape, Great Adventure, and Great America. Theme park fans will note that the major zones are named after Six Flags parks found in America. Set over an area of 3.5 million square feet with an opening day footprint of 2 million square feet, the estimated cost of the project is AED 2.6 billion.

Six Flags Dubai will feature at least three world record breaking rides in addition to six Roller Coasters, four Aerial Attractions, a 350-meter River Rapids ride and three performance spaces along with many attractions tailored for younger guests. Additionally, the park will have 16 Food and Beverage outlets and 16 Retail outlets.

The entire destination will be connected by Riverland Dubai – a retail, dining and entertainment walkway located at the heart of the destination and guests can stay at the Lapita Hotel, a Polynesian-themed resort catering to families, which will be managed by the Marriott Group.

Set to open in October this year, the AED 10.5 billion development is spread across 25 million square feet of land located on Sheikh Zayed Road in Dubai opposite the Palm Jebel Ali. 6.7 million ticketed visits are projected for 2017, the first full year of operation.

For more information, go to dubaiparksandresorts.com, and watch this video of motiongate Dubai from April 2016: