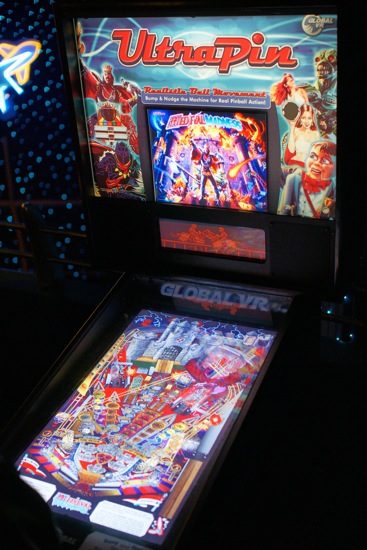 At first glance it may look like a regular pinball machine, but when you get a little closer you see the playfield looks a little flat. This full-size pinball machine at DisneyQuest uses a video screen instead of real bumpers and metal balls.

One of the coolest things about it is that you can bump the machine and it affects the ball just like real pinball. Another thng that makes it better than a real machine is that you can choose between 12 different classic pinball games.

The machine is called UltraPin by a company called Global VR. Their Web site says the machine was a 2006 Innovator Awards winner, so maybe it’s been out for a while. But it’s the first time I’ve seen one, and I’m a big pinball fan – checking out the machines wherever I see them.

After playing it, I can say the ball movement is very realistic, and being able to nudge the table makes it even more so. But like all the other pinball simulators, it’s not perfect. One other advantage it has over the other pinball machines at DisneyQuest is the fact that the “mechanics” will never get worn down. Unfortunately a few of the other regular machines there have been played over and over and it shows. Time to swap them out Disney.

I don’t think the UltraPin will replace the good old steel balls – but for businesses who have limited room but want to give their customers many choices, and/or are tired or having to replace worn-out parts, UltraPin is a cool answer.

Tips to become a Galactic Hero on...