The annual FX International Show started out many years ago as just the FX Toy Show. When I first started going, it was held at the Orange County Convention Center and was a large event with a few celebrities. As the years went on, the show dwindled in size, had less celebrities and moved to different locations around town. Well it’s back at the Convention Center and bigger than ever this year.

The show started today and continues tomorrow and Sunday. Most of the hall consists of dealers selling various collectable toys and action figures from your childhood to some not yet widely released stuff. Although Star Wars figures seem to be the most popular, you’ll find just about every kind of toy collectable here.

In addition to the toys, you’ll find many other happenings, such as wrestling matches, comic book artists signings, A “Who Wants To Be The FX Superhero” costume contest, and the aforementioned celebrities. The guests range from true celebrities to some years-gone-by, barely “Celebrities”; From Erik Estrada to Fat Momma (pictured below); from the stars of Heroes, Star Wars and Smallville to the stars of Firefly, Angel and Power Rangers. Check the FX Web site at www.fxshow.com for a full list of guests and events.

Up next for Orlando’s fan boys and girls is Megacon March 7 to 9. I can’t wait to get some pictures of the Ninja Babes from Space.

Check our Photo Gallery for more pictures from the FX show. More will be added throughout the weekend. 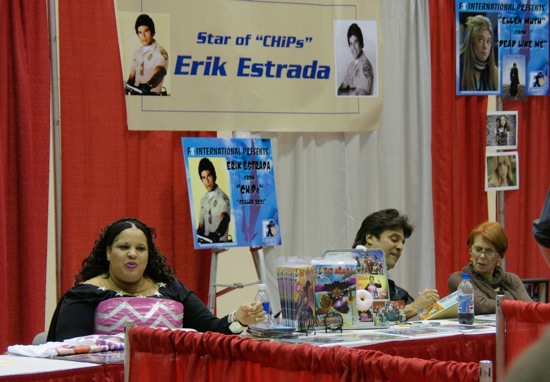 Every year we say that the FX show was not worth it the year before and we are not going…but we do. They upped the fee to $25 this year….That together with the hefty parking fee decided it for us… We are not attending.

I agree that $25 is getting a bit expensive, but they’re offering a 3-day pass this year for $50.
Check out our new post about this year’s show: https://attractionsmagazine.com/blog/?p=1677

where in florida is the next toy show, i live in orlando and when is it, thank you i have toys to sell