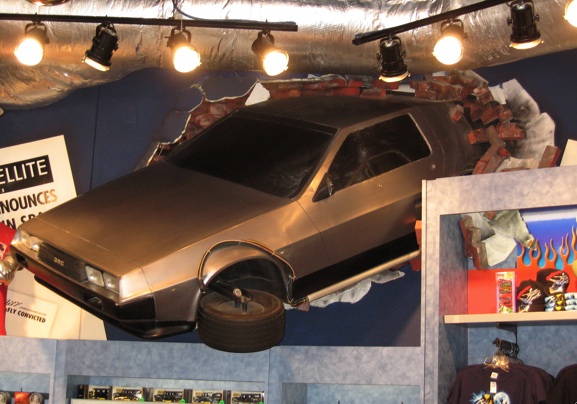 The Feb. / March 2008 issue of Orlando Attractions Magazine features The Simpsons Ride at Universal Studios. While we are greatly looking forward to this new attraction, we never like to forget old attractions either. In this case, we’re talking about Back to the Future The Ride, which was formerly housed where The Simpsons is currently being installed.

We talked to Stephen Clark of BTTF.com, the leading online source for everything Back to the Future.

Attractions: How did your interested in the film franchise begin?
Clark: I had always been a fan of good time travel stories and felt that this one ranked among the best I had ever seen at the time, but that’s as far as my thrill for the film went. That is, until the film came out on home video for the first time a year later. Upon my discovery of the brilliantly written article “The Other Marty McFly?” in the July 1986 issue of STARLOG magazine (written by Disney Imagineer Bruce Gordon who recently passed away), I was instantly hooked. As I read Bruce’s descriptions of all these intricate little details in the film that I had inadvertently missed in theaters, I simply had to rent the film and watch it again. And again. And again. My fiancé simply couldn’t understand why I kept rewinding and watching the film over and over looking for details such as a mysterious figure in the mall parking lot scene, the changing of the name of the mall at the end of the film, the painstaking continuity of broken concrete ledges on the clocktower, the location of the torn pieces of Doc’s letter, and so forth. So by the time the first sequel came out in 1989, my “geek switch” was permanently switched on I’m afraid.

Attractions: How many times have you ridden the Back to the Future ride?
Clark: Collectively, somewhere around 25 times I’d guess. I’ve never ridden the one in Japan, but I can happily say that I got to ride both the Florida and Hollywood versions multiple times over the years.

Attractions: Universal has told us that the Marty and Doc Brown characters will still be appearing in the park. What are your thoughts?
Clark: I’m not surprised. After all, Universal kept the Ghostbusters running around the park with Ecto-1 for years after they closed that attraction.

Attractions: Back to the Future was recently included in the Universal 360 show as well as in Bill and Ted’s Excellent Halloween Adventure show during Halloween Horror Nights. How would you like to see the movies featured at Universal in the future?
Clark: I can tell you that simply featuring Back to the Future in these shows isn’t enough to draw Back to the Future fans to the park. Universal needs to go back to the drawing board and look at their original plans for the park and its attractions which opened in 1990 – 1991. Back to the Future – The Ride was originally designed to be modified so after the original story was “tired”, some simple modifications and a brand new ride film could instantly provide a brand new attraction in the same building using the same cars, just with different programming. But the regime who started those ideas were replaced with other management who didn’t share the same vision nor held any passion for Universal’s own film properties. While the ride is now history, I’d like to see Universal actually focus their parks on film properties that they own (which are now the minority in the park).

Attractions: Can you share any funny or interesting stories related to the Back to the Future ride?
Clark: Well, I’ve always thought that the fact that you could see a styrofoam coffee cup in the alleyway next to the clocktower left accidentally by someone on the miniature set during filming was funny.

For more of our interview with Stephen Clark, including his thoughts on The Simpsons as a replacement to Back to the Future The Ride, check out Feb. / March 2008 issue of Orlando Attractions Magazine.

Details released for this year's Flower and Garden Festival

I found your site on google blog search and read a few of your other posts. Keep up the good work. Just added your RSS feed to my feed reader. Look forward to reading more from you.