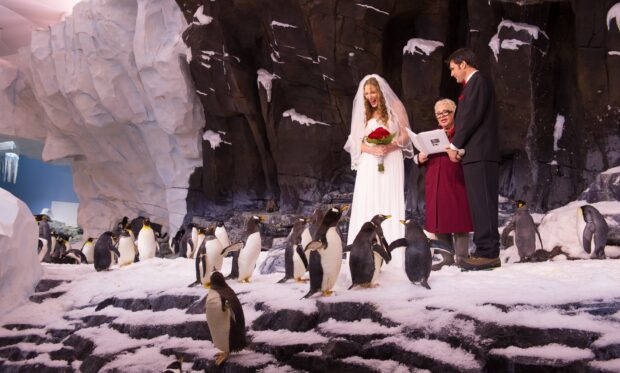 A true white wedding was held recently at SeaWorld Orlando as two Antarctic explorers shared their vows inside the Antarctica: Empire of the Penguin attraction.

Heart-warming and bone-chilling extremes could be felt as the couple, who met in 2012 while working in Antarctica for the New Zealand government, was married in the 32-degree, snowy penguin habitat.

Just inches from the bride and groom were 250 members of the bridal party – a colony of king, Adélie, gentoo and rockhopper penguins – all dressed in their black and white “tuxedos” fit for the occasion.

“Antarctica is such a beautiful and intense environment. When you experience that with someone, the bond you create is rare. Having our wedding here at SeaWorld in this realm that so perfectly captures the essence of the continent brought me right back to the day Jeff and I met,” said the bride, Susanne Grieve.

The couple “wintered” together in 2012, braving average temperatures of minus 76 degrees fahrenheit. Fresh produce and mail were two of the many conveniences the couple went without during their time in Antarctica.

Grieve, who now teaches conservation, preservation and archaeology courses at East Carolina University, hopes to one day return to the frigid continent where she had previously worked with the Antarctic Heritage Trust to protect late 1800s explorers’ legacy, including the bases and the artifacts they left behind. The groom, Jeff Rawson, still works for the New Zealand government and just recently returned from Antarctica. Rawson’s work focuses on supporting scientific research on climate studies and ice core sampling.

“Having our wedding at SeaWorld’s Antarctica really represented the place we built our relationship. It was so fascinating to see the elements the designers replicated from this continent only a handful of people would ever typically be able to experience,” Grieve said.