As part of the True Love week of Limited Time Magic about 50 couples attended a meet-up put on by Disney Weddings and proclaimed their “Celebration of True Love” at Magic Kingdom. Also in attendance were some of Disney’s most famous couples, Mickey Mouse and Minnie, plus Snow White, Cinderella and Princess Aurora with their princes.

Here’s a look at the full ceremony on Cinderella Castle stage: 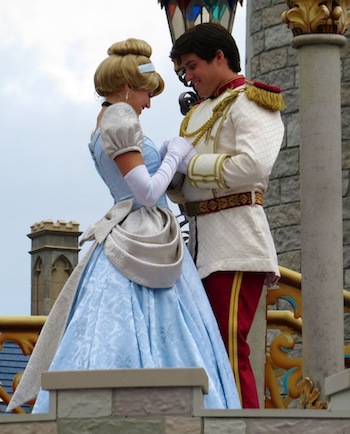 Some of the couples in attendance included:

Michael and Susanne Ryckman: Engaged at the Magic Kingdom in front of Snow White and Dopey on Feb. 1, 2003.

Lori and Ed Juliff: Honeymooned at Walt Disney World and celebrating their 10th anniversary on Feb. 15.

Whitney Melancon and husband: Met on the Disney College Program 10 years ago. Their first date was at Epcot. He proposed during Illuminations (with cast member help) in 2006.

Be sure to watch the Feb. 21, 2013 episode of Orlando Attractions Magazine – The Show for our full report including interviews with some of the happy couples. 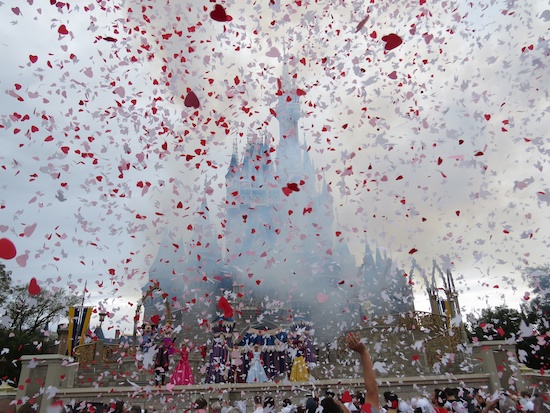 1. Is that Matt and Jackie Roseboom that I spy in the midst of all those couples? Aww, how cute!

2. I really appreciate you guys trying to cover all the different “Limited Time Magic” events. I’m sure it’s a massive undertaking. I doubt it will happen, but I hope that Disney will put together a DVD of all the different events, for those of us that can’t﻿ be there every week!

Ah, I think I know why my comments weren’t posting now! Let me word this third question differently: Were there any couples there of the same gender? I’m just curious, since Disney is usually pretty friendly to same-gendered couples.

Yes, that was myself and my wife, participating this time instead of covering it.

Yes, we did see at least one same sex couple in the ceremony.