D23 will bring Disney magic across the country in 2018 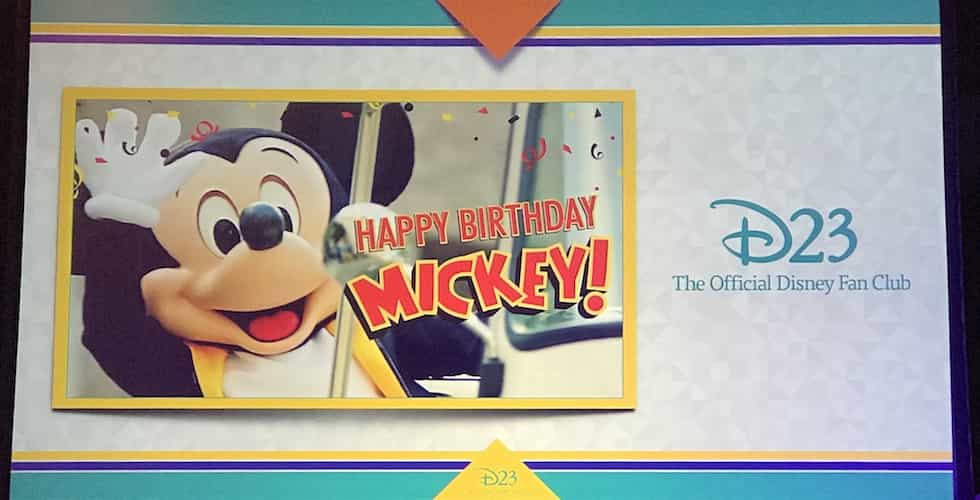 D23 Members will get to celebrate Mickey’s 90th birthday in style at Walt Disney World Resort.

In 2018, D23: The Official Disney Fan Club will host a lineup of events to satisfy every Disney fan around the country.

Nov. 18, 2018 will mark 90 years since the debut of Mickey Mouse in “Steamboat Willie,” and to celebrate, D23 is throwing a party at Disney’s Contemporary Resort at Walt Disney World.

The birthday celebration will include panels, a new exhibit from the Walt Disney Archives, presentations, a pop-up store from Mickey’s of Glendale, and more. More details on the event, including special hotel rates and ticketing information will be announced at a later date.

Gold Members will once again have access to exclusive tours of the history Studio lot, which will include a peek inside the Walt Disney Archives and a tour of Walt Disney’s office. The 2.5-hour tours will offer fans a special perspective on historic moments form Disney films, theme parks and television shows. The December tour will also include a new holiday surprise.

In 2012, D23 Members took a trip to Marceline, Miss., where Walt Disney spent his early childhood days. The town inspired much of his work, with Walt even writing, “More things of importance happened to me in Marceline than have happened since or are likely to in the future.” Members will have another chance to explore Marceline, and even take a stroll down the town’s own “Main Street U.S.A.” during this all-day event with special guests.

D23’s Lunch with a Disney Legend

Starting in January, D23 will bring back luncheons with Disney Legends, and give attendees the chance to hear their stories. The events will be held at both Walt Disney World Resort and The Walt Disney Studios.

Throughout 2018, D23 will offer screenings of classic Disney films on both coasts, including “Mary Poppins,” “Peter Pan” and more. Next summer, Disney toon fans can enjoy Saturday morning cartoons on the Studio lot.

Pixar and the Parks

D23 will kick off with three events in collaboration with Walt Disney Parks and Resorts in April, as members are invited to celebrate the 20th anniversary of Disney’s Animal Kingdom with special in-park experiences, culinary offerings and surprises. Next summer, D23 will invite guests into Andy’s backyard when Toy Story Land opens at Disney’s Hollywood Studios, as well as experience a special event for the opening of Pixar Pier at Disney’s California Adventure. For the first time ever, Members will get the chance to tour Pixar Animation Studios in Emeryville, Calif. More information on these events will be released after the new year.

Two fan-favorite Disney films are celebrating their silver anniversaries in 2018: “Hocus Pocus” and Tim Burton’s “The Nightmare Before Christmas.” In 1993, both films introduced audiences to the hilarious and inventive worlds of Jack Skellington and the Sanderson Sisters. Next fall, Members will get to enjoy new features from the films, as well as screening events on the Disney Studio lot and around the United States, where guests will get to vote in advance on which of the two films they will get to see.

D23 Members can look forward to exclusive advance screenings across the country in 2018, including “A Wrinkle in Time” and “Mary Poppins Returns.” Gold Members will be selected at random to receive complimentary movie passes, which will be included with their issues of Disney twenty-three, the fan club’s quarterly magazine.

D23 will bring the return of the fan-favorite event, “Sip & Stroll,” during the Epcot International Food & Wine Festival in 2018. Guests to Walt Disney World Resort and The Walt Disney Studios will also be invited back to enjoy “Light Up the Season.” Behind-the-Scenes Experiences will return, offering Gold and Gold Family Members exclusive experiences and events.

D23 will bring more mixers for members to meet and mingle with one another in 2018.

The event lineup, dates, ticket information and more will be announced throughout 2018. Full details on next year’s events are available on the Fan Club’s website. Check out the current 2018 event calendar below:

David S. Pumpkins is a thing at Madame Tussauds … Any questions?

Schedule changes to our weekly Attractions Magazine shows and vlogs

Movie Review: Marvel has another winner with...