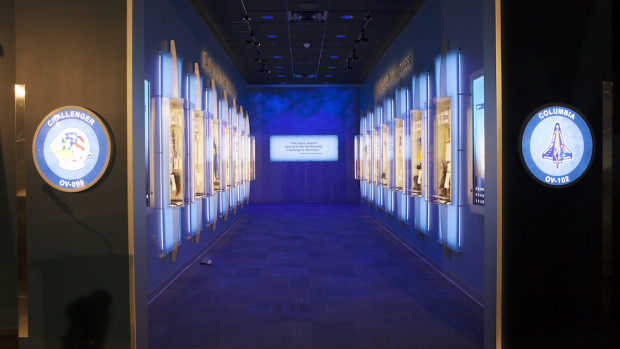 The Astronauts Memorial Foundation is holding a Day of Remembrance ceremony at Kennedy Space Center Visitor Complex to honor the crews of Apollo 1 and space shuttles Challenger and Columbia.

The annual event, taking place at 10 a.m. this Thursday, Jan. 28, 2016, honors members of the NASA family who lost their lives while furthering the cause of exploration and discovery. This marks the 30th year since the space shuttle Challenger tragedy. A solid rocket booster malfunction 73 seconds after lift-off claimed the lives of seven crewmembers and the vehicle. The STS-51L Challenger crew included Commander Francis R. Scobee, Pilot Michael J. Smith, Mission Specialists Judith A Resnik, Ellison S. Onizuka and Ronald E. McNair and Payload Specialists Gregory B. Jarvis and Sharon Christa McAuliffe.

Set to take place at The Astronauts Memorial Foundation’s Space Mirror Memorial, located at the visitor complex, the ceremony will include a wreath laying as well as remarks by various dignitaries. Built and maintained by the Astronauts Memorial Foundation, a private, nonprofit organization, the mirror was dedicated in 1991 to honor all astronauts who lost their lives on missions or during training. It has been designated a National Memorial by Congress and honors 24 astronauts whose names will be read during the ceremony.

The Voices of Liberty from Walt Disney World will perform the National Anthem and a closing selection. Vocalist Brandon Heath will perform “Out There” and “Love Never Fails.” The ceremony will conclude with a flyover by the Florida Air National Guard. Remembrance events will also be held by NASA at Arlington National Cemetery and other NASA locations.

Access to the Day of Remembrance ceremony and wreath laying at Kennedy Space Center Visitor Complex is included with admission. The visitor complex will provide flowers for ceremony guests and visitors throughout the morning to place at the memorial.

Guests can preview Zootopia with two experiences at Disney World