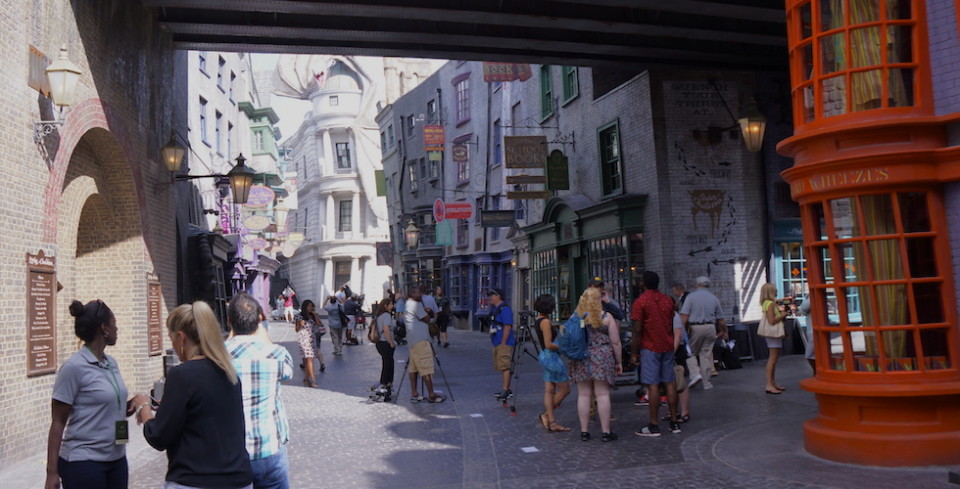 The Wizarding World of Harry Potter – Diagon Alley doesn’t open until July 8, 2014. But you can get into the new land right now. The shops, restaurant, entertainment and more are now under a soft opening.

A soft opening, also known as technical rehearsal, means it’s not officially open yet, as they’re still testing everything out with guests. This also means the all or parts of the area may not be open every day, or for parts of each day, until the grand opening on July 8. It is expected the Harry Potter and the Escape from Gringotts ride will be very limited before the grand opening, if it soft opens at all.

The Hogwarts Express train ride, which takes guests with two-park passes from Universal’s Islands of Adventure and Universal Studios and back, soft opened a couple of days ago. But Diagon Alley itself has remained closed to everyone except Universal hotel guests who had purchased a special Harry Potter package. They have been able to enter for a couple of hours each day since Monday. As of around 3:30 p.m. today, Thursday, July 3, 2014, all park guests could enter.

If you can’t make it to the new area anytime soon, check out our video playlist below:

We also give you a guided tour through the area on the an edition of “Orlando Attractions Magazine – The Show”:

For more information about Diagon Alley, including a photo gallery, click here.

Werewolves to take over Legends haunted house for one night only

The Attractions Show! – Justice League at...