Dinosaurs to take over Amway Arena 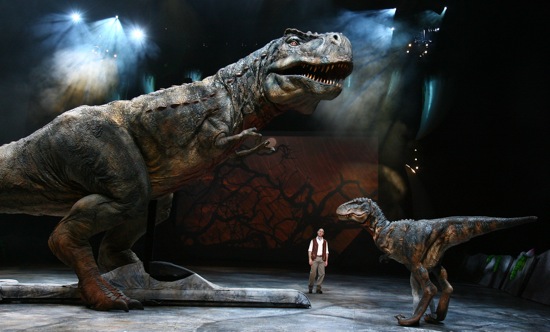 Dinosaurs will once again roam the earth in the theatrical arena show, Walking With Dinosaurs – The Live Experience, based on the award-winning BBC Television Series. The show is coming to the Amway Arena
for eight performances from Nov. 12 to 16.

The show originated in Australia, where it came to life at Sydney’s Acer Arena in January 2007. The show proved such a sensation that a North American tour was fast-tracked. The show is brought to North America by The Creature Production Company, headed by CEO Carmen Pavlovic. “The BBC Series was a brilliant blend of special effects, escapism, excitement and information,” said Pavlovic. “Our show brings together all of that, plus something extra – it’s live! In this production, 15 roaring, snarling “live” dinosaurs mesmerize the audience – and are as awe-inspiring as when they first walked on earth. The dinosaurs are life-size, making the show so immense, it could only fit in arenas.”

Ten species are represented from the entire 200 million year reign of the dinosaurs. The show includes the tyrannosaurus rex as well as the plateosaurus and liliensternus from the triassic period, the stegosaurus and allosaurus from the Jurassic Period and torosaurus and utahraptor from the awesome Cretaceous. The largest of them, the brachiosaurus is 36-feet-tall, and 56 feet from nose to tail. It took a team of 50 – including engineers, fabricators, skin makers, artists and painters, and animatronic experts – a year to build the original production. The show depicts the dinosaurs’ evolution, complete with the climatic and tectonic changes that took place, which led to the demise of many species.

Tickets range from $27.50 to $65 and go on sale to the general public at 10 a.m. on Friday. But with the special presale code of TREX, you can buy tickets now through 5 p.m. tomorrow by clicking here to visit Ticketmaster.com. Tickets are also available by calling 407-839-3900, in person at the Amway Arena box office and at any Ticketmaster retail location.

For more information, visit www.dinosaurlive.com. Video of the show is available under “The Dinosaurs” tab in the middle of the front page.

Roarin’ Rodeo coming up at Gatorland

I want to know about Amway, and I want to join it. So how can i do this?