Theater Review: These ‘Disenchanted’ princesses have a bone to pick, your funny bone 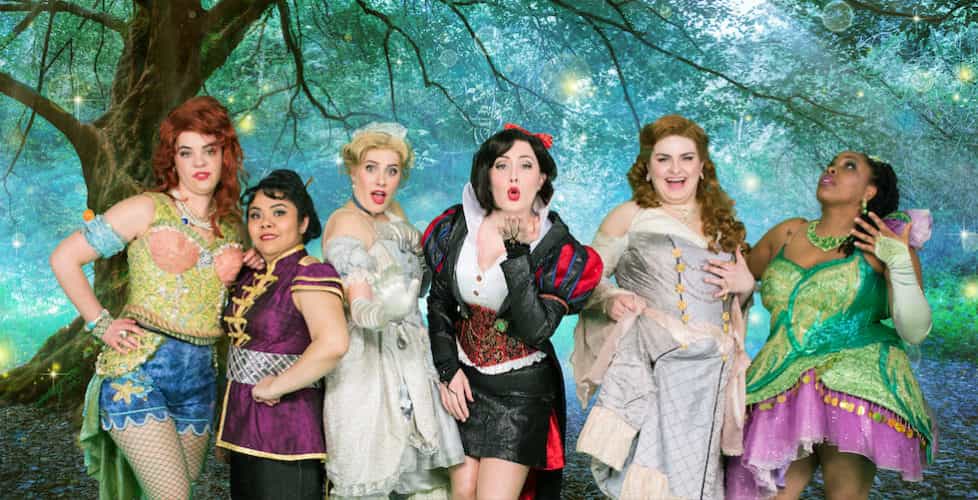 In “Disenchanted”, you’ll find out how the original princesses, made popular by Disney, really feel about how they’ve been portrayed. Spoiler alert! They’re none too happy. As they get a few things off their chest, you’ll be laughing along.

As the show begins, you’ll learn this isn’t a story about how Snow White (Shelby Ringdahl), Cinderella (Madison Hayes-Cook), The Little Mermaid (Mirium Drysdale), Sleeping Beauty (Daniella Richards), Mulan (Ann Paula Bautista), The Princess Who Kissed the Frog (Cherise Thomas) and a couple of other princesses met. There’s really not much of a story at all. It’s the princesses putting on a variety show to let you know their real story: They’re not weak little girls waiting for their prince to save them. They’re strong women who’s lives aren’t all happily ever after.

One by one, each tells their true story, from their Grimm Brothers start to their current Disneyfied versions. These princesses can really belt out the songs. None of the actresses were bad singers. I enjoyed most of the songs, although none stuck with me after the show. The whole musical stars six ladies playing all the roles. There are no men in the show, and that’s the way it should be. This is the princesses time to shine.

The musical does have some adult themes and language. It all comes out as the girls tell their tales. Even though your kids know these princesses, this isn’t a story for them. Most of the jokes would go over their heads anyway. The production company says the show is recommended for ages 13 and older. I’d say 16 and older.

Most of our group really enjoy “Disenchanted”. The one that didn’t said they were wanting more of a story and less of just a “variety show”. I loved it. The cast was very talented and gave it their all.

“Disenchanted” is now playing at The Plaza Live in downtown Orlando every night through April 20, 2017, except Easter. Tickets start at $37 and you can get them at plazaliveorlando.org.

Disney+ celebrates the season with the Happy Holidays...