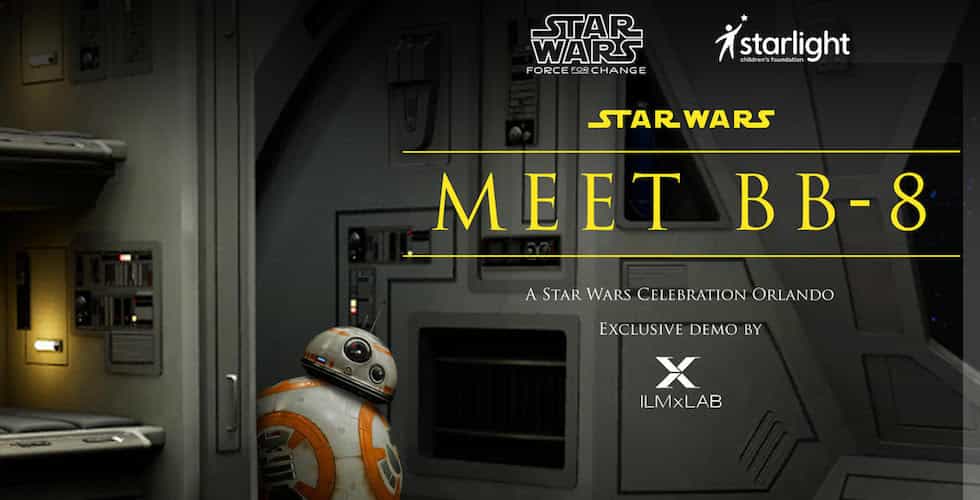 Guests can test out meeting BB-8, one of Starlight’s VR experiences, at Star Wars Celebration Orlando, from April 13-16.

Starlight Children’s Foundation has announced a brand new program called Starlight Virtual Reality, in the hopes to inspire, entertain and educate thousands of hospitalized children across the country.

Star Wars: Force for Change is the virtual reality program’s founding sponsor, with additional funding provided by Niagara Cares, as well as the VR technology itself powered by Google. The program will begin later this year, and Starlight will begin to provide the programming to Starlight’s network of children’s hospitals and health facilities 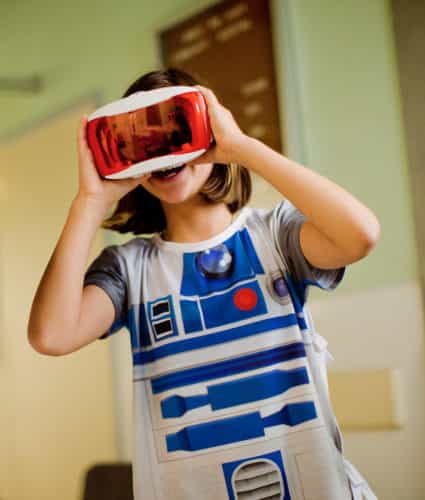 Children will be able to travel to a galaxy far, far away, thanks to Starlight and Star Wars: Force for Change.

Young patients in children’s hospitals are often there for long periods of time, and aren’t able to experience things like going to a theme park and meeting their favorite characters. Imagine how they could feel to be transformed into a Star Wars character themselves, being transported to a galaxy far, far away through virtual reality.

“We’re excited to announce the launch of Starlight VR which we believe will be a game-changer in the pediatric health care space,” said Chris Helfrich, CEO of Starlight Children’s Foundation. “We’re excited to have Lucasfilm and Disney, Google and Niagara Cares alongside us as we harness the power of virtual reality to bring more smiles to hospitalized kids when and where they need it most.”

Star Wars: Force for Change, with the support of The Walt Disney Company, is providing a grant to Starlight Children’s Foundation which will help to fund the placement of nearly 270 VR headsets and equipment in children’s hospitals in the U.S. Lucasfilm will be providing “Star Wars”-themed content for the program. This grant will also help to deliver Starlight Brave Gowns and Starlight Star Visits to the young patients.

Starlight Children’s Foundation will also receive a grant from Niagara Cares, the philanthropic organization of Niagara Bottling, to fund research for Starlight VR, to help discover enhancements and proper usage for future projects within the program.

Starlight VR is a physical program designed for entertaining and distracting the young patients. Not only will the children get to enjoy the “Star Wars” content, but also be able to experience Google’s VR content, such as Google Expeditions, Google Earth VR, Tilt Brush, and Daydream.

The headsets and equipment will be stored in a safe and hygienic encasement that is easily moved through the hospitals, providing a safe and stationary way for children to experience virtual reality.

Currently, the first “Star Wars” VR experience made possible through this great collaboration is to meet the cutest spherical droid in the galaxy, BB-8. A demo is currently available to try at Star Wars Celebration Orlando from April 13-16.

Theater Review: These ‘Disenchanted’ princesses have a bone to pick, your funny bone

D23 is celebrating Muppets milestones all next...