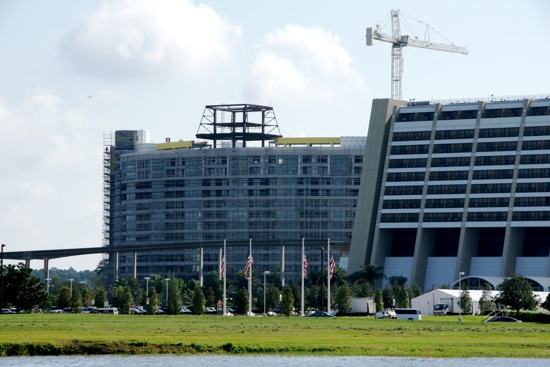 The 15-story Bay Lake Tower at Disney’s Contemporary Resort is scheduled to join the Disney Vacation Club family of properties in fall 2009, while the Treehouse Villas at Disney’s Saratoga Springs Resort & Spa, scheduled to open in summer 2009, will become the next room category offered at that resort.

Disney Vacation Club also announced that Bay Lake Tower sales are scheduled to begin on Sept. 21 for Disney Vacation Club Members, while sales to the general public and sales for the newest phase of Disney’s Saratoga Springs Resort & Spa will begin at a later date.

“Our founder, Walt Disney, was well known for having one foot in the past and one in the future,” said Disney Vacation Club President Jim Lewis. “These new resort developments share that dynamic sensibility, blending modern luxury and design with the nostalgic spirit of two of the most storied resorts in Walt Disney World history.”

That membership growth has also driven Disney Vacation Club expansion, inspiring Walt Disney Imagineers to dream up new vacation home opportunities. In addition to Bay Lake Tower and the Treehouse Villas, development continues on Disney’s Animal Kingdom Villas, The Villas at Disney’s Grand Californian Hotel & Spa at the Disneyland Resort in California and the recently announced resort at Ko Olina on the island of Oahu.

The new, curvilinear Bay Lake Tower at Disney’s Contemporary Resort is designed to complement the fabled styling of the original building, which opened with the Magic Kingdom Park on Oct. 1, 1971. Mimicking the color palette and strong horizontal lines of its iconic predecessor, the new structure even sports a rooftop lounge inspired by the original resort’s A-frame architecture. 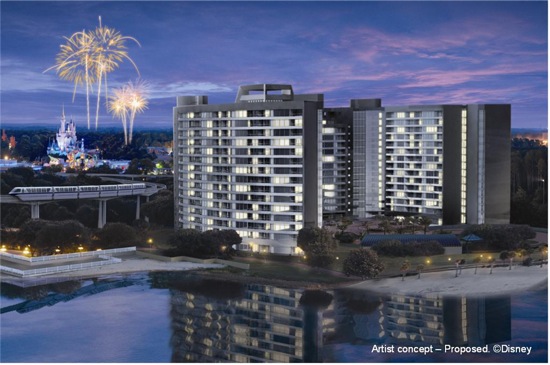 The tower’s crescent shape, hugging lush landscaping, planned recreation options and a lakeside pool, promises to deliver some of the most dramatic views available anywhere at the Walt Disney World Resort. Some villas face scenic, undeveloped stretches of Bay Lake, while others offer spectacular views of the Magic Kingdom Park, located a short walk away. 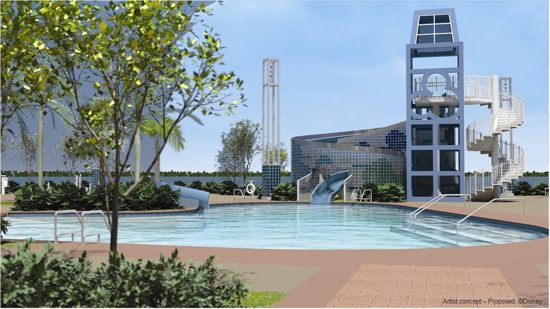 Most of the rooms will feature innovative touches, such as modern artwork designed specifically for Bay Lake Tower, flat-screen TVs, full kitchens complete with granite countertops and modern appliances, separate bedrooms, washers and dryers, and other home-like amenities. Plus, to accommodate larger families or families traveling together, many Bay Lake Tower vacation villas are designed to sleep up to nine, though some units can also be divided into one-bedroom villas that sleep five and studios that accommodate four, creating flexible options for smaller groups. 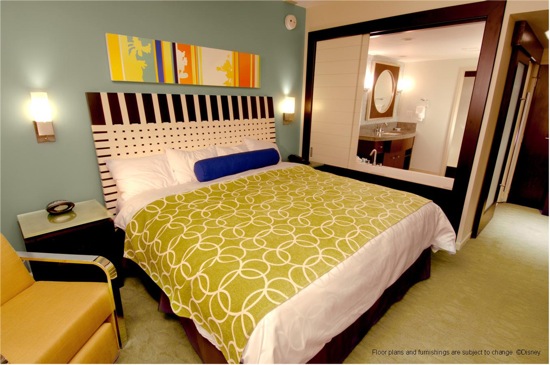 “These vacation homes will be furnished with some amazing custom pieces that are works of art unto themselves,” said Imagineer Brian McFarland. “It’s all about maintaining that feel of clean lines and open spaces, with plenty of Disney touches.”

Also planned are a spacious lobby filled with woven woods and glass-wrapped columns, sweeping views from a rooftop lounge and fireworks viewing deck, and the convenience of a sky bridge linking families to shops, restaurants and the monorail station.

Meanwhile, nestled in natural forest glens just around the river bend from the bustling Downtown Disney area, the Treehouse Villas at Disney’s Saratoga Springs Resort & Spa will mark the newest phase of what has become the largest Disney Vacation Club resort. Phase one of the idyllic lakeside community debuted in 2004, and phase three sold out earlier this year. This new phase will revive Walt Disney World “treehouse living,” a cherished tradition from 1975-2002. While crews are replacing villas of the ‘70s with brand-new vacation homes, Imagineers took special care to honor the original octagonal design. 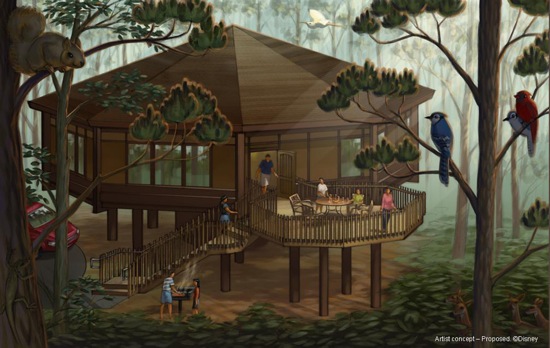 The construction process itself is unique as each stand-alone Treehouse Villa will come together like a giant 3-D puzzle to ensure both superior quality and environmental sensitivity. All 60 three-bedroom homes, elevated 10 feet off the ground on pedestals and beams designed to blend into the forest environment, will sleep nine and are planned to offer modern luxuries such as cathedral ceilings, granite countertops and flat-screen TVs, all presented in a style dubbed “cabin casual.” 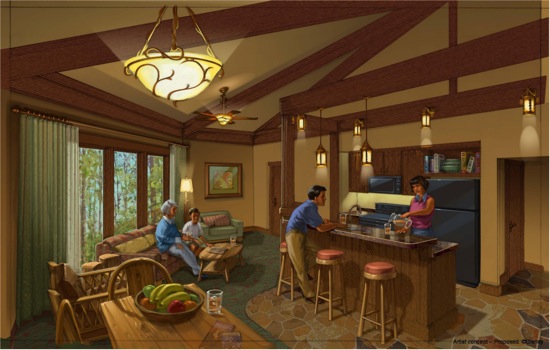 “I was lucky enough to have a treehouse as a kid, but it was certainly nothing like this,” said Imagineer Todd Thomasson. “In developing this resort, we’ve all learned a new word, ‘glamping,’ which apparently means glamorous camping. The Treehouse Villas will be glamping at its absolute best.” 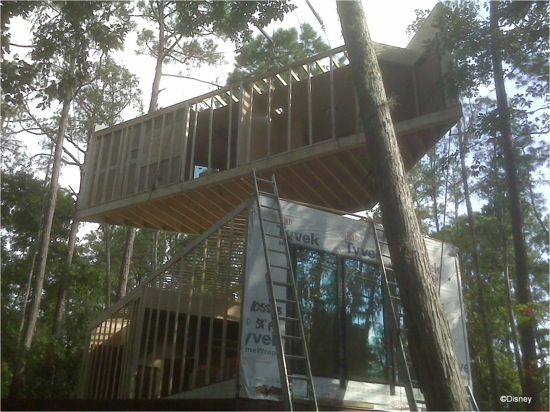 • There are 167 miles of post-tensioning cable running through the concrete slabs of Bay Lake Tower. These cables could stretch from Bay Lake Tower to Disney’s Vero Beach Resort and back.

• There are 1,398 tons of reinforcing steel, known as rebar, within the Bay Lake Tower structure. This is equal to the weight of 254 full-grown elephants.

• Bay Lake Tower rests on a foundation of more than 800 concrete piles that are 16” in diameter and extend 70’ into the ground. Stacked on top of one another, these would reach more than 10 miles into the sky.

• Environmental sensitivity was extremely important to Disney Imagineers when constructing the new Treehouse Villas. As a result, 5,178 tons, or 65.22 percent, of materials from demolition were recycled, including concrete and metals.

• When it comes to wiring, Disney Imagineers working on the Treehouse Villas went to great “lengths” to ensure every vacation home runs smoothly. Consequently, there are 87,858 lineal feet, or 16.6 miles, of wire for fiber optics, copper, telephones and CATV.

• To support all 60 Treehouse Villas, there are a total of 480 concrete columns.

Out of the Loop: runDisney adds Avengers...