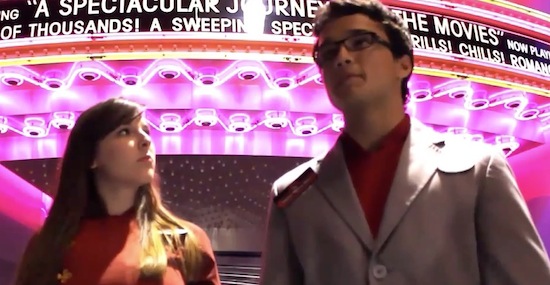 No, it’s not the third movie in the Night at the Museum series staring Ben Stiller, but it seems like it could be. The Night at the Great Movie Ride trailer is a well produced parody by some talented Disney World cast members.

Each year around Labor Day, Disney arranges a get-together for The Great Movie Ride cast members. The event highlights those who’ve gone above and beyond in their duties and is also a chance for cast members to show off skits they’ve put together.

James Hermle had helped his co-workers with their annual skits in the past but he wanted to do his own while also raising the bar. Now all he needed was an idea. “I was sweeping up around the ride one night before closing and noticed a few of the animatronics slightly moving,” said James. “They do that because the safety valve and air pressure lets their arms drop a bit and then adjusts back to normal when not in use. But imagine walking by one of them in total silence and seeing them move slightly. It can be a very eerie experience.”

After he had the idea, James spent the next few months learning everything he could about cinematography, making props and costumes and getting used to his new camera. Finally ready to start shooting, James got management’s approval, enlisted some cast members and scheduled time to shoot in the attraction after hours. Five months later, the trailer was finished.

Here’s the film. You’ll enjoy it that much more if you’re familiar with the ride.

EDIT: James has asked us to remove the movie trailer. Here’s his statement:
“Thank you to everyone who has enjoyed this little skit. Because of the amount of attention being drawn to a hastily completed project, I would rather have a more professional look to represent the quality that Walt Disney Company offers it’s guests everyday. I am not 100% satisfied with what you have seen and would only offer my best to represent an attraction I love so dearly. I am requesting that the video be removed while the Company prepares to release a more professional look to represent the Great Movie Ride.”

I can’t wait for this movie to come out!

…wait, it’s not coming out?! OK, someone *needs* to make this. This idea is just waaay too cool!

Hey great job, I can only hope that you can work on this as a full lenght, but a trailer sounds fantastic, I hope to see it soon as I missed the video while it was up, knowing Jim when it’s released it will be nothing short of epic, Good luck.

“while the Company prepares to release a more professional look to represent the Great Movie Ride.”

Anyone have any insight into what that means? Seems promising…