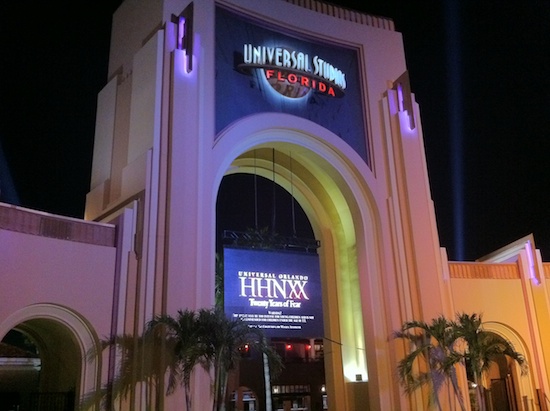 I had a chance to look around Universal Studios earlier today. It seemes like most of the props are out for the Halloween Horror Nights scare zones. Let’s take a look.

A large video screen was installed in the arch gateway to Universal Studios. Not much was playing on it yet, but I’m sure that’ll change once the event starts.

The first scare zone you’ll see upon entering the park is Esqueleto Muerte. “Revel in the seductive taunts of Death as you wind through a glowing skeletal nightmare.” 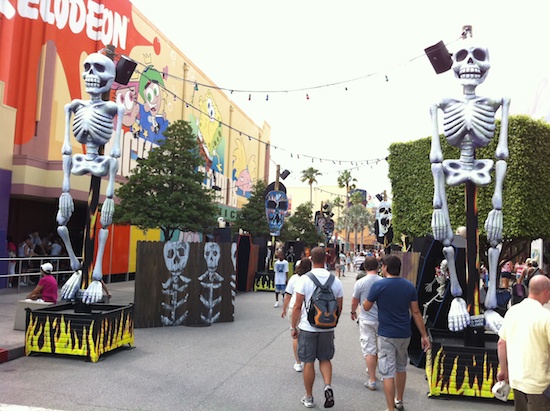 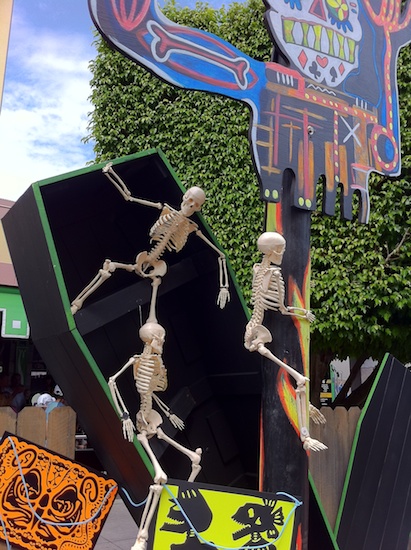 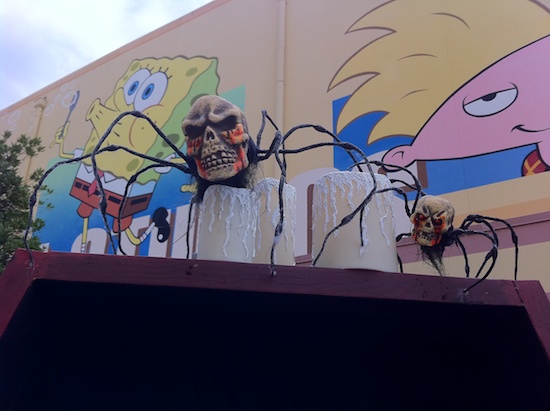 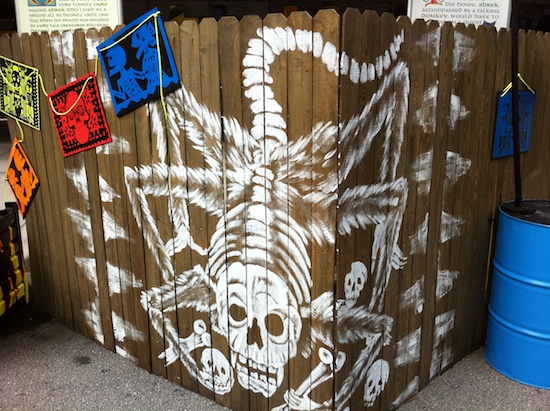 Located between the Shrek show and Jimmy Neutron ride, Esqueleto Muerte was one of the more visually interesting scare zones, second only to HHN 20 Years of Fear.

Located just down from the T23D show is HHN: 20 Years of Fear. “The lantern casts its light on some of the most frightening characters of Halloween Horror Nights past!.” 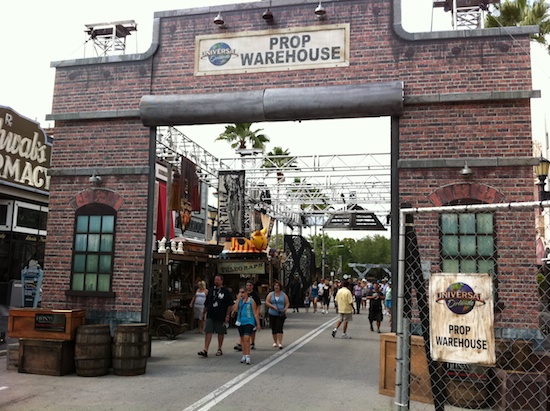 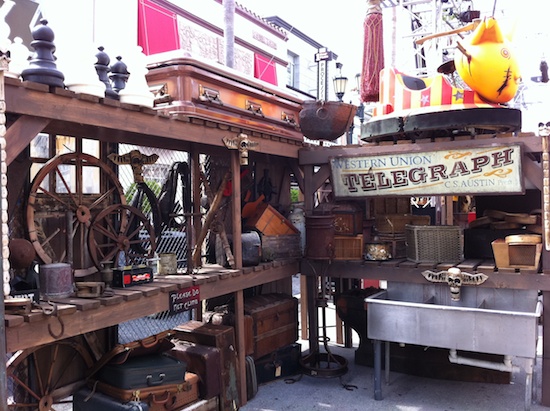 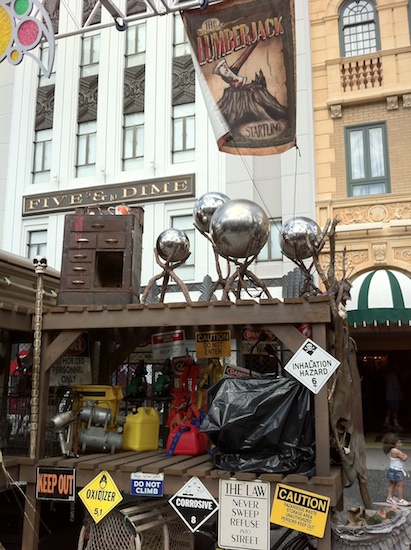 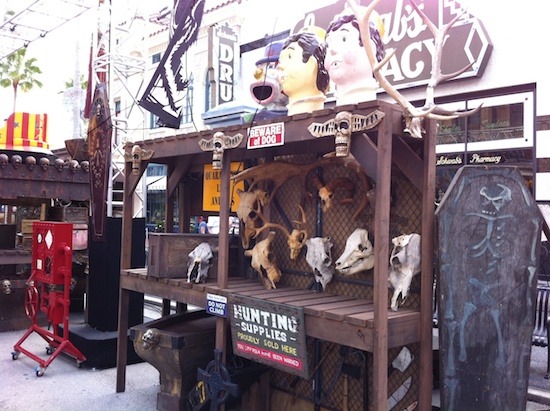 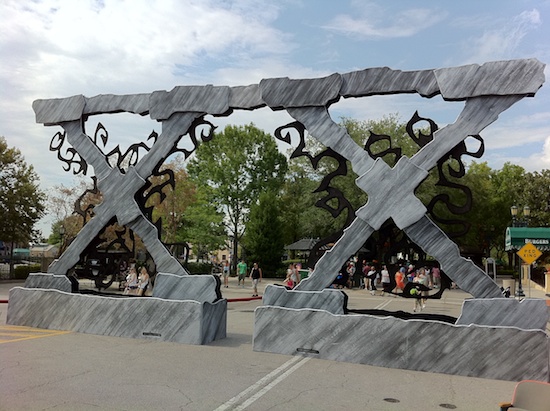 There’s a new Warehouse Exxperience game on the Halloween Horror Nights website. If you beat all the mini games, you find out that some former icons are but puppets of Fear. Jack is Chaos, The Caretaker is Death, The Director is Sacrifice, The Storyteller is Legend and The Usher is Vengence. Each of them have their own sets located around the large XX. 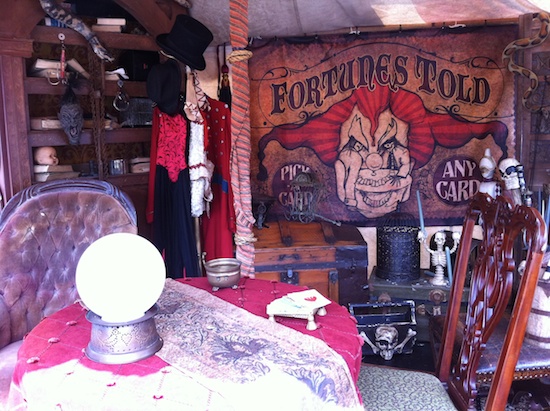 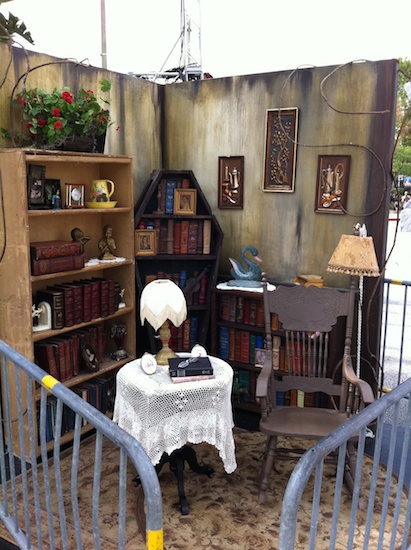 The Storyteller. (There are some interesting books on the shelves. My favorite is “Sith Happens” by Maul.) 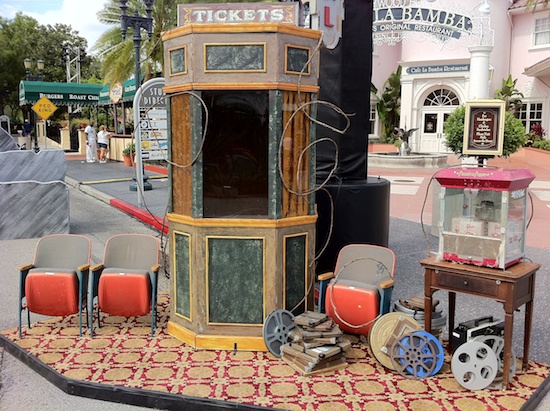 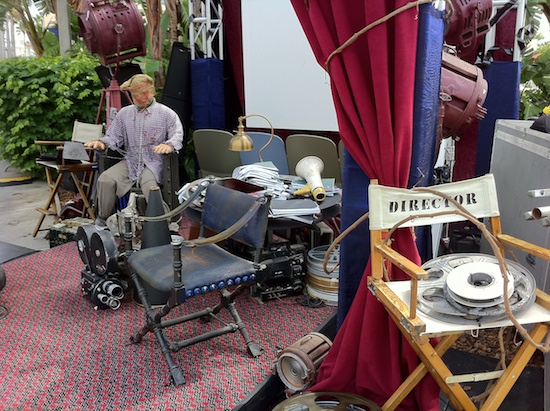 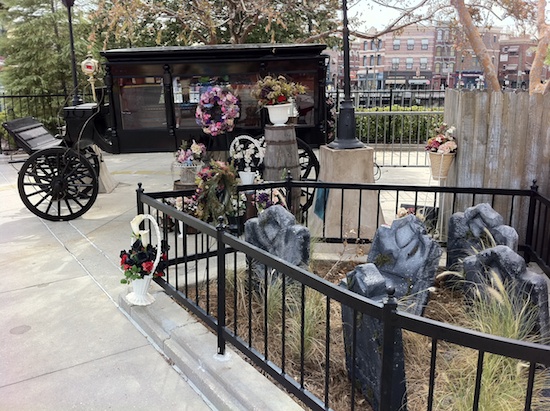 The one things that “ties” all of these together with the large XX, and what we’ve seen of Fear so far, are vines. Notices the vines draped around all these sets and the large XX. I guess it sybolizes that they all grew from Fear. Fear himself seems to be made of vines.

Located next to the exit of the Shrek show is The Coven. “Beware the Cult of the Raven! Enter this witches realm at your peril, as unbelievers will be condemned to death.” 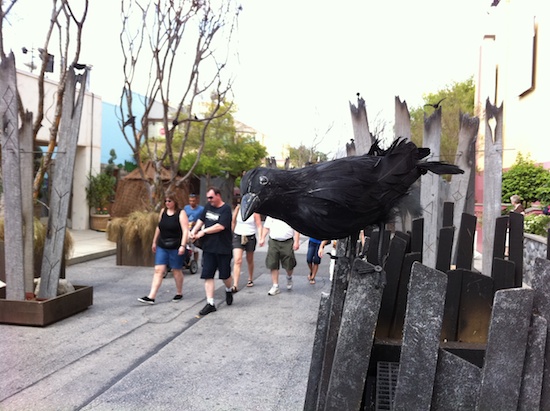 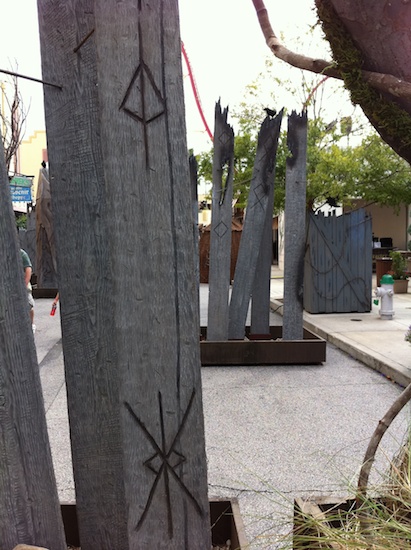 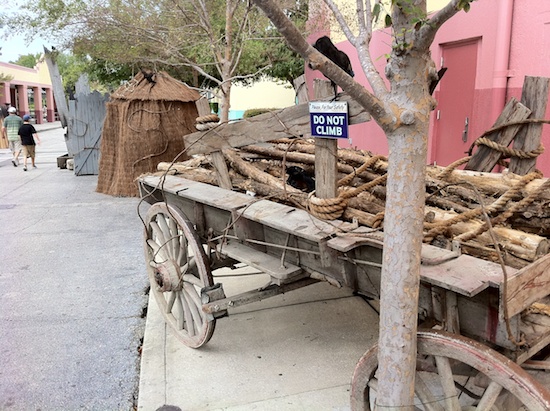 You’ll also notice there are some vines in The Coven.

Back by the Disaster ride is Zombie Gras. “This Mardi Gras parade has gone severely off course and the undead walk among us.”

This scare zone had the least to see, just a few bloody banners and signs. 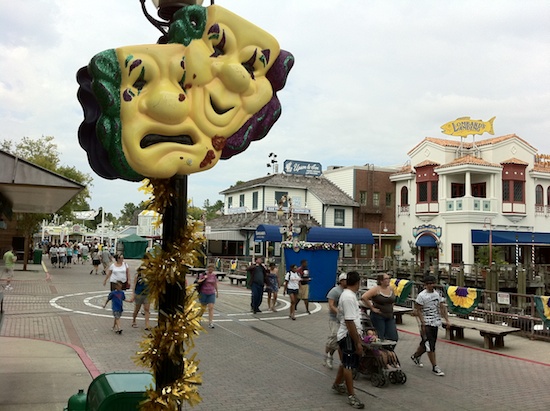 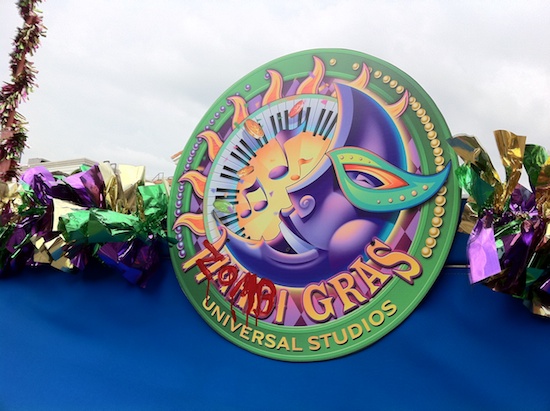 The last scare zone is located down an alley near The Mummy ride, Saws ‘n Steam. “In a world powered by steam, the oceans have evaporated… leaving your body as an untapped source of fuel.” 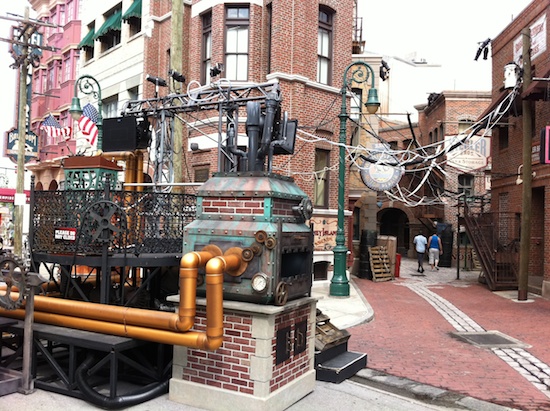 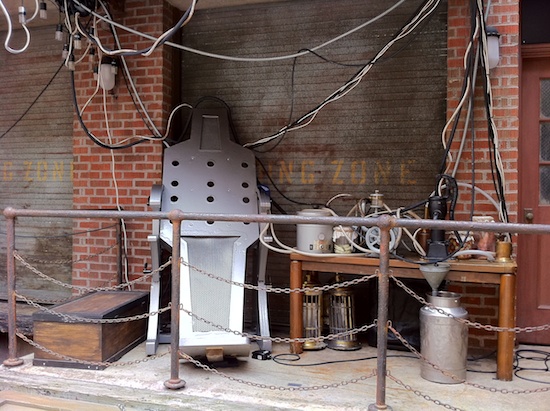 Saws ‘n Steam is where you’ll find a new steampunked version of the Chainsaw Drill Team.

While not officially a scare zone, the walkway with hundreds of pumpkins is pretty cool. 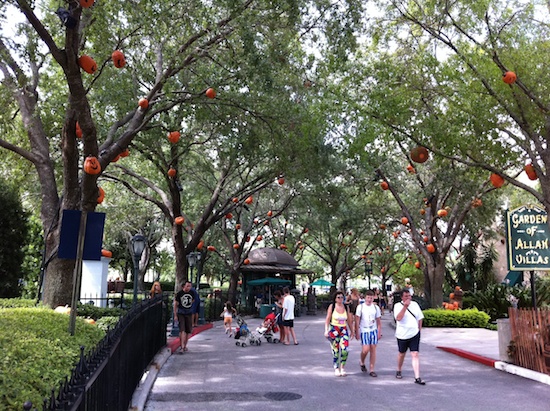 This year you’ll find pumpkins carved with the faces of all the returning icons. Here are a couple: 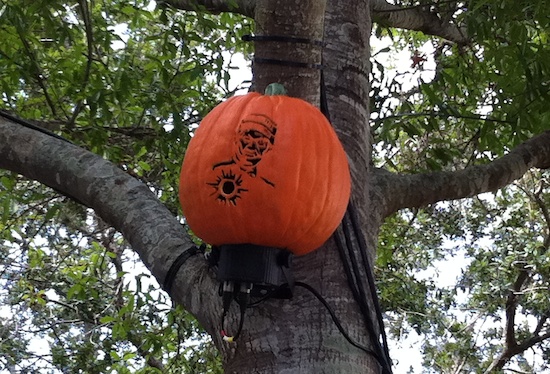 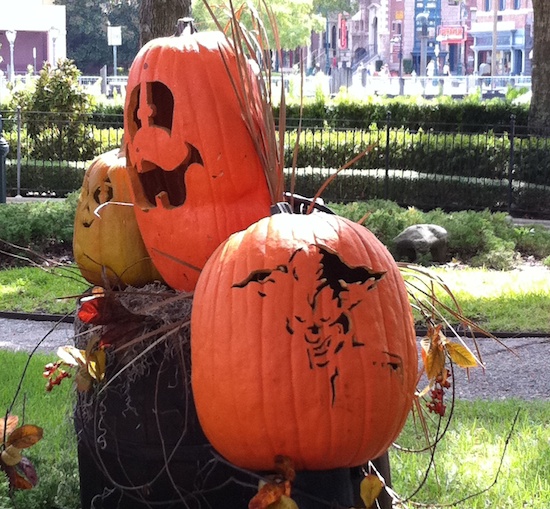 Keep watching our site leading up to Halloween Horror Nights this Friday. Also look for our opening night videos and photos this weekend.