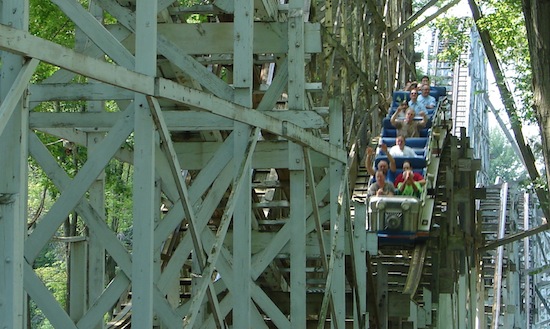 Labor Day marks the official end to many parks’ summer seasons. Conneaut Lake Park in Western Pennsylvania has seen more than 100 such seasons come and go. Conneaut Lake, Pa. sits almost 100 miles north of Pittsburgh. Opened in 1892 as Exposition Park, it served mostly as a picnic and gathering area. The first ride appeared several years later. As the decades passed, more rides and a midway were established. The name changed to Conneaut Lake Park in the 1920s. The Blue Streak roller coaster opened in 1938. This ACE (American Coaster Enthusiasts) designated historic coaster is the sixth oldest in the country.

The following decades have seen more ups and downs in the history of the park than any roller coaster’s wild ride. The ever-changing ownership and disasters such as fire have plagued the park on many occasions. Within the last couple of decades, the park was deeded to the people of northwestern Pennsylvania as not-for-profit public trust. The park is still run by a board of trustees and it appears it might finally be emerging from the bad amusement park karma it has experienced. Having been closed for both the 2007 and 2008 seasons, there is a tentative feeling of hope after 2009 and then again in 2010. 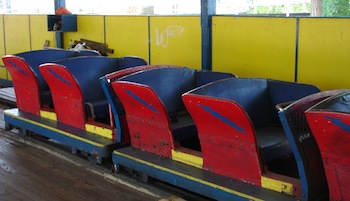 There is perhaps no bigger symbol of this hope than the Blue Streak roller coaster. For quite some time, maintenance has come in the form of band-aids. This “fix-only-what-needs-fixing” maintenance coupled with seasons of non-use and the calendar age of 72 years have taken a toll on this classic. If the Blue Streak were owned by a multi-million/billion dollar amusement park corporation, they’d simply do a complete overhaul followed by a grand re-opening party. But, in this era when we are talking about a “double-dip” recession rather than a double-dip cone from an amusement park’s ice cream parlor, there is no such thing as public funding for a historic restoration no matter how noble a project appears.

In come the fans. They have been funding the restoration over the past months. Thousands of dollars have been raised by private donors. This apparently was enough to get a coaster restoration crew to begin work. Enough work was completed that the old Blue Streak click-clacked again over the Labor Day weekend!

Fan support did not end there. The folks at Conneaut Lake Park applied for a grant from the Pepsi Refresh project. The Pepsi Refresh project seems simple enough. From the Pepsi Refresh website: “We’re looking for people, businesses, and non-profits with ideas that will have a positive impact. Look around your community and think about how you want to change it.” This is where the fan support kicked in again. Visitors to the Pepsi Refresh website had to opportunity to vote for the most worthy projects. Coaster fans and friends of Conneaut Lake Park made their voices heard. The Blue Steak restoration has become a finalist for a $50,000 grant pending a final application process. This amount would represent 40 percent of their fundraising goal.

I think this quote from the Pepsi Refresh website sums up the project: “The reopening of the Blue Streak carries value beyond the thrills of its 77-ft. high, 2,900-ft. long structure. It signifies the preservation of a place where friends, fun, and family time are the priority.” Isn’t that why we love amusement parks?

Here’s the Blue Streak in action: 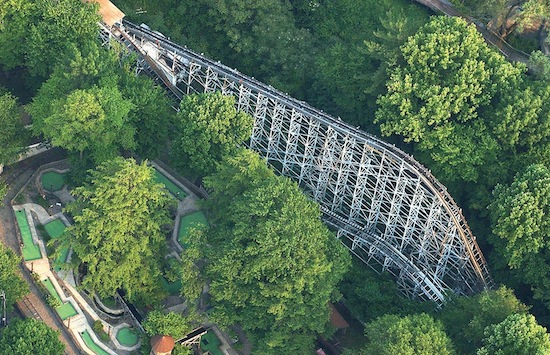 Overdue update on this story – Conneaut Lake Park did win the Pepsi Refresh grant for to go toward The Blue Streak restoration fund.

You can still click the link above to donate.

A day at Tivoli in Copenhagen –...