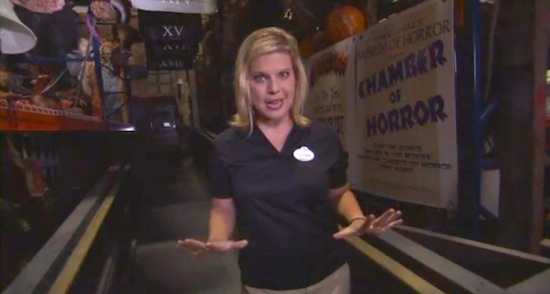 Each September we receive something in the mail from Universal Orlando to invite us to experience their Halloween Horror Nights event. It’s usually something creepy. In the past we’ve received a bloody torn-up doll and a bloody jewelry box. So this year I was a bit hesitant to open the package FedEx just dropped off.

I opened the large envelope to find another envelope inside. I thought to myself, “Oh no. Is something going to pop out at me”. To my surprise, nothing popped out and there was nothing bloody inside.

Inside was a USB thumb drive and a letter from Heather Summers, who was listed as a member of Universal’s creative team. The letter said that a video on the drive would show us some “trade secrets” on the scares of Halloween Horror Nights. Heather went on to say the video would give us some in-depth information they’ve never shared before.

Here’s the video. It does offer a peek into the new haunted house, “Horror Nights: The Hallow’d Past”, but before any trade secrets could be revealed… Well, watch for yourself.