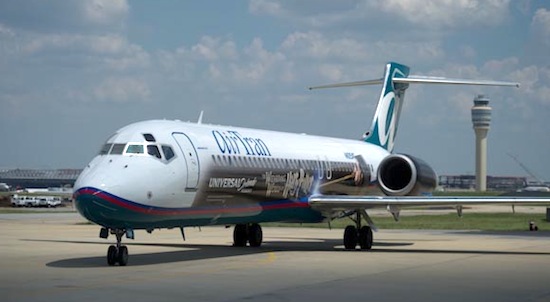 Is this the new version of the Hogwarts Express? AirTran Airways, and Universal Orlando have teamed up to allow passengers a ride on a one-of-a-kind “Wizarding World of Harry Potter” themed aircraft.

The Boeing 717 features an illustration depicting a wizarding hand, complete with wand, stretching from the back of the plane to the front. The tip of the wand is pointing towards The Wizarding World of Harry Potter logo across the side of the fuselage. The wand and hand sit just across from the Universal Orlando Resort emblem.

The plane first launched by flying winners from the Today Show’s “The Wizarding World” contest. First grade students from San Antonio were among the first to ride on the aircraft to the Orlando International Airport. AirTran Airways’ crew members aboard Harry Potter 1 were decked out in Harry Potter glasses and scarves to help celebrate the aircraft and the winning class of students.

The decorated plane is expected to be in service at least until the end of the year, or as long as the decal will stay in place. So look to the skies and you may see Harry’s wand flying by.

I’m pretty sure Virgin Atlantic beat them to this?