Editor’s Note: “Disney Dining News and Special Treats” is a new monthly column from The Disney Food Blog. Check out their updates and recommendations here each month on the can’t-miss bites at the Disney Parks. 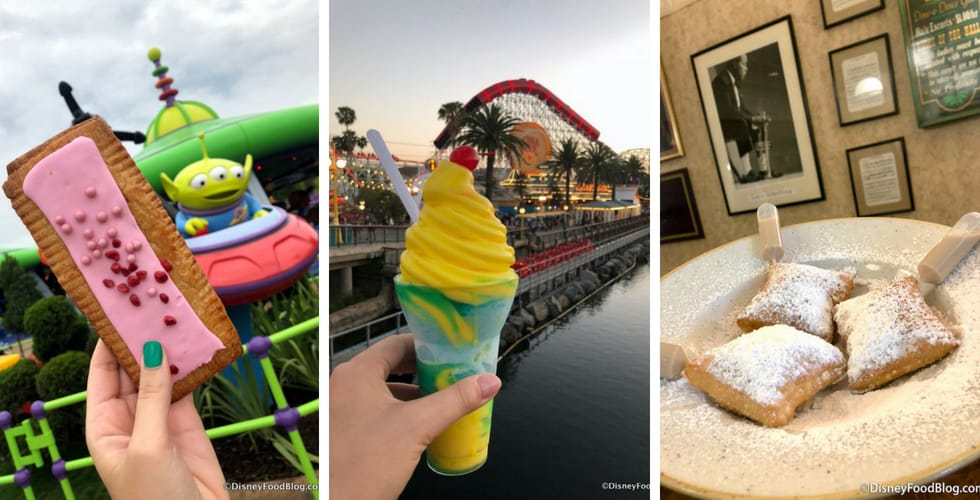 In this month’s column, we take a look at some of the new treats at both Disneyland and Walt Disney World.

By The Disney Food Blog
So far, this has been a great summer coast-to-coast to be a Disney foodie! We’ve had the opening of Pixar Pier in Disney California Adventure, along with Toy Story Land’s opening in Disney’s Hollywood Studios at Walt Disney World – plus all the food introductions, reappearances, and limited-time treats. Check out just a sampling of all the items we tasted and found in the parks over the last month below!
Pixar Pier at Disney’s California Adventure: 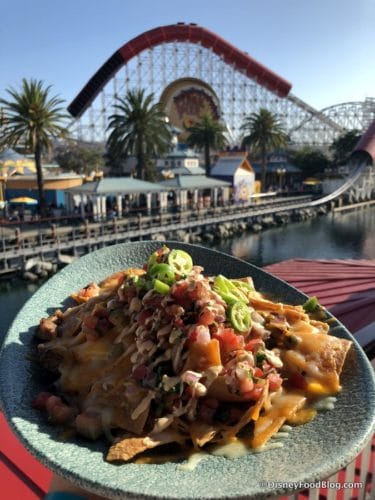 Pixar Pier recently opened in the former Paradise Pier area with an abundance of new dining locations. The new themed land includes a cool new lounge and a string of snack kiosks lining the Pier. Here is a complete list of the new dining offerings at Pixar Pier:
Toy Story Land at Disney’s Hollywood Studios: 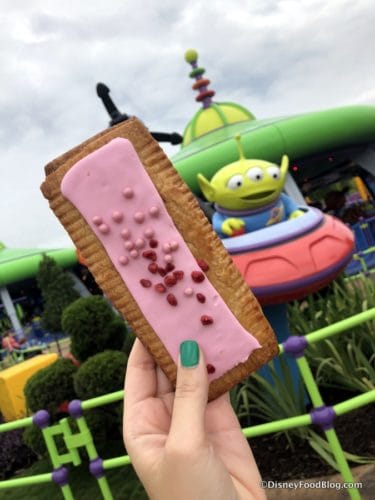 Florida saw the opening of the long-awaited Toy Story Land with Woody’s Lunch Box as the go-to place for breakfast, lunch or dinner.

Special Finds:
In addition to the two new lands opening on both coasts, we also found some new gems and the return of guest favorites during our travels this past month. Just a few of the many treats we tasted, enjoyed, and shared include: 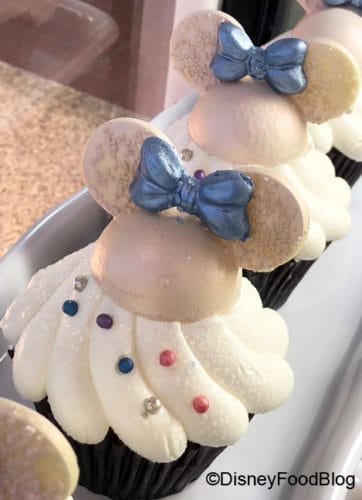 Iridescent treats have taken over the Disney Parks.

All Around the Parks, Coast-to-Coast:
Magic Kingdom at Walt Disney World: 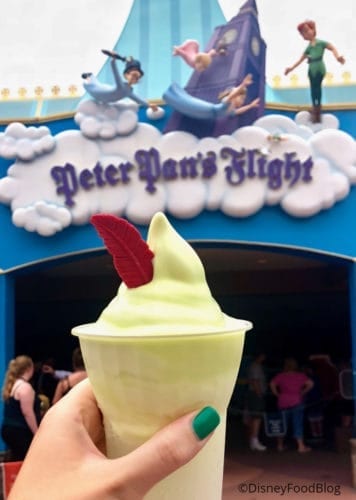 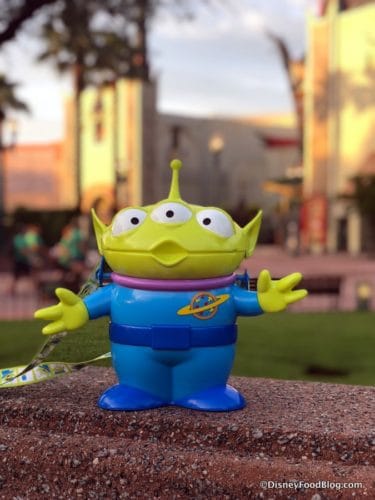 The first stocking of these buckets immediately sold out at Disney’s Hollywood Studios.

Disney’s Animal Kingdom:
Disney Springs:
Disney Springs saw the opening of Terralina Crated Italian as well as the launch of Enzo’s Sunday Supper at Enzo’s Hideaway.
Terralina Crafted Italian is the newest restaurant in Disney Springs. The location itself is the former home to Portobello Country Italian Trattoria, which closed in The Landing of Disney Springs last year. Location isn’t the only thing that Terralina shares with the former restaurant. Chef Tony Mantuano, James Beard Award Winner, has returned to create Terralina’s menu, and he’s joined once more by Chef Justin Plank to run the kitchen. In fact, even a few favorite items from Portobello can be found on the Terralina menu.
Options include antipasta, salads, wood-fired pizzas, pasta, options from the hearth and grill, sides, and desserts – all with an extensive wine, beer, and cocktail list. Lunch offerings include sandwiches.
Still somewhat new to the Disney Springs dining scene, Enzo’s Hideaway Tunnel Bar opened as one of a trio of eateries this past January. The Hideaway’s counterparts are Maria & Enzo’s Ristorante and Pizza Ponte. Even newer, though, is Enzo’s Sunday Supper – a special menu served from 4:00 pm – 10:00 pm every Sunday.
The family-style meal starts with an Antipasta Board and Salad, followed by Rigatoni with Sunday Sauce, a selection of meats, all followed by desserts. Meat offerings include chicken, meatballs, wagyu short-ribs, or Atlantic salmon – each accompanied by roasted fingerling potatoes and seasonal vegetables.
Sunday Supper at Enzo’s is a prix fixe meal, which will cost $45 per adult guest, and $19 for children ages 9 and under. The experience is not all-you-care-to-eat. With the exception of the Pasta course, which is the only refillable option, you receive a set amount.
Something very unique to Sunday Supper is that it’s a “BYOB affair.” You’re welcome to bring your own bottle of wine with no corkage fee! The servers will present glasses and serve your wine gladly. You can also order from the regular beverage menus, if you prefer.
Guilty pleasures at the resorts:
We all have them, those cravings, guilty pleasures, and favorites from the past – and now Disney is helping us indulge in them, even when we are on vacation, with the introduction of Boozy Beignets and Cookie Dough – plus more places offering spiked Dole Whip! 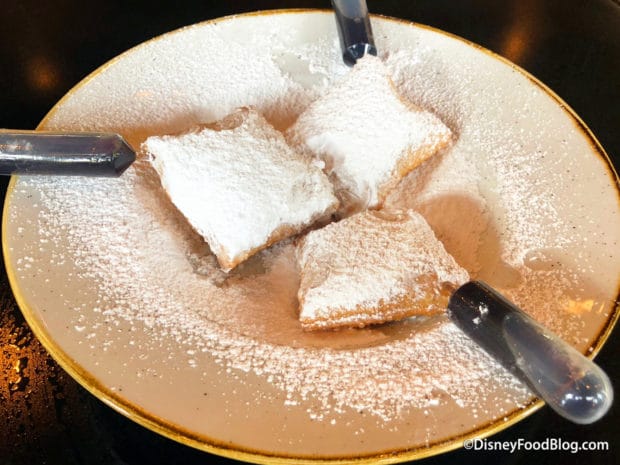 Dreams do come true in New Orleans with these boozy beignets.

This is just a small portion of all that we covered in the last month on Disney Food Blog. We also covered new mermaid cupcakes, a seasonal burger at D-Luxe Burger, even more new popcorn buckets, special effect drinks at Magic Kingdom and Typhoon Lagoon, and more! Hop on over to Disney Food Blog to keep up with the latest in Disney food news!
• Launched in 2009, the Disney Food Blog offers in-depth news, reviews, and information about food and restaurants in Disney’s parks, resorts, and cruise ships. See DisneyFoodBlog.com and our YouTube channel, DFBGuide, for more Disney food updates.
Email
Share
Pin3
Tweet
Share31
34 Shares
0 comment
0
FacebookTwitterPinterestWhatsappEmail
previous post

The Weekly Rewind – Christmas in July, Tower of Terror and more