Theme Park Foodie: Disney, give us the Grey Stuff! 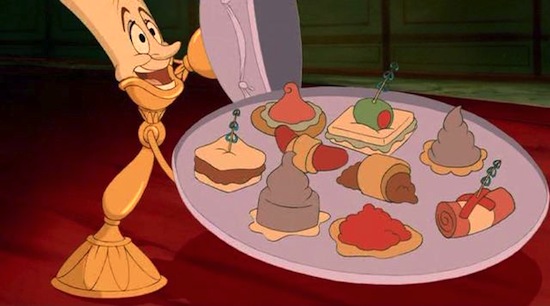 There has been much fanfare and excitement around Walt Disney World’s New Fantasyland expansion, which most notably features the Beauty and the Beast inspired restaurant, Be Our Guest.

To the dismay of many, when information on the Be Our Guest restaurant was released in 2012, it did not in any way mention the song’s distinct treat, the grey stuff. You know, “try the grey stuff, it’s delicious!” Disney fans and Beauty and the Beast fans alike were disappointed; it seemed out of character for the detail-oriented Imagineers and chefs at Disney to overlook such an important aspect of the dining scene. In fact, one of the head chefs said he had to go back and watch the movie to see what people were talking about.

That was why, when Disney finally announced there would indeed be Grey Stuff, fans rejoiced! On social media, many commented on how excited they were to see the restaurant, and many couldn’t help themselves from throwing in a campy comment about the Grey Stuff. There was genuine excitement around the dish, despite the fact that no one could really imagine just how the Grey Stuff would taste. 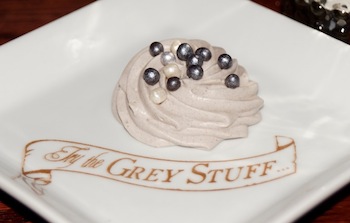 Unfortunately, now that the restaurant is open, I can’t help but be disappointed by the minimal role the dessert plays. It is still not available on the menu. Instead, it must be requested from the wait service and each waiter decides how much of the dessert the table should receive. And it’s only available during dinner. We’ve heard everything from one dollop of Grey Stuff for a table of five to three small servings for a party of the same size. Servers have told those dining in the restaurant that “more will be available for special occasions,” leading us to believe the dessert will be offered as the restaurant’s signature celebratory treat for birthdays, anniversaries and other special events.

Disney is, uncharacteristically, missing out on the opportunity to make quite a bit of money.

The restaurant’s specialty item, L’Amour Vrais, is fruit punch or lemonade served in a light up goblet. Here’s the thing: I am the biggest Beauty in the Beast fan that I know of. When I tell you that I, a 23-year-old woman, will likely cry when I first step into that restaurant, I mean it. I’m that much of a fan. But even I will not sit there and drink lemonade or fruit juice out of a souvenir cup. No matter how much I might want the cup. If it were a mixed drink, we might be able to discuss the possibility. But it’s not, and there isn’t one. I doubt the wait staff will be willing to bring me wine in the glow cup.

On the other hand, I would probably pay up to $20 for a full serving of the Grey Stuff in a nicely themed souvenir dish with the words “try the grey stuff, it’s delicious” printed on the side. I’m not saying that every visitor to the restaurant would, but for many, the cost would be worth the experience and the opportunity to enjoy the Grey Stuff. I’m certainly guessing that more people would purchase that dessert than the $18.99 goblet of fruit punch.

Disney, how are you missing this wonderful opportunity to make money? Give us more Grey Stuff! We will buy it. Don’t believe us? Ask the dishes.

• Ashley Nichols is the editor of Theme Park Foodie, a blog that highlights dining and cuisine opportunities at theme parks throughout the United States with a focus on Central Florida. Her interest in the amusement industry’s food offerings began in 2010 when she served as a seasonal team member at an Orlando-area theme park and was repeatedly asked for referrals to the park’s best restaurants or dining options. Follow her on Twitter @ThemeParkFoodie.

Zombies provide the motive during the ‘Run For Your Lives 5K’

Great piece. I’m gonna confess something: I find those light-up goblets to be… dare I say it?

Also, I want grey stuff. Badly. Disappointed that they aren’t offering it at lunch. Completely agree that they are missing a major money-maker here, which is as un-Disney as serving alcohol at a restaurant in the Magic Kingdom. Hey, wait…

Had chance to have dinner at Be Our Guest during preview for New Fantasyland for passholders, and had to ask waiter to try Grey stuff, he then jokingly asked me well it is your birthday right?? I said sure, he said ok since its your Birthday. only to have him conventiently forget it when he brought out other desserts. It wasnt until my husband noticed I was getting ready to pay bill that it didnt come and so my husband asked him again can you please bring some grey stuff out for my wife to try, that the waiter finally brought it out to us.

The Grey Stuff—It’s such a novel idea and very fitting! I was really hoping to try the it during our upcoming trip. Since we will only be dining there during lunch, I’m saddened to hear it won’t be available to us! Hopefully they will see the opportunity to offer it for a price—I’d be willing to pay!

“Give us grey stuff, we will buy it!
Don’t believe us? We will riot!”

Disneyland launches ‘Together We Can Be Incredible’...