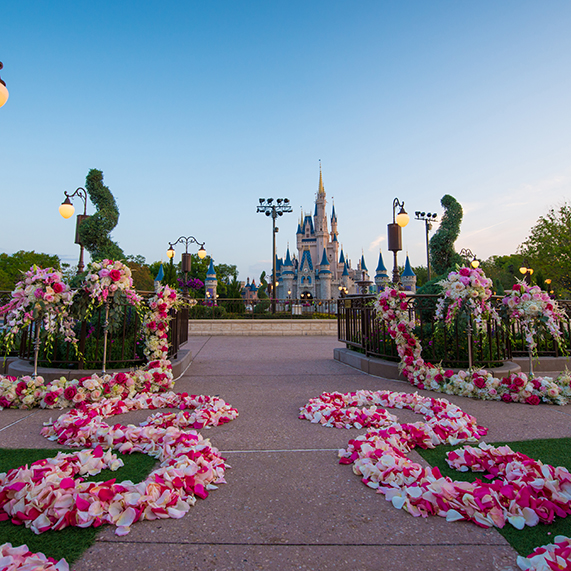 Happy couples look for a magical place to tie the knot at Walt Disney World now have an enchanting new option, as Disney is now offering Magic Kingdom weddings in the East Plaza Gardens during park operating hours.

The East Plaza Garden at Walt Disney World’s Magic Kingdom is the latest venue where you can now say your vows with your sweetheart in the ultimate fantasy setting. Located at the end of Main Street U.S.A., the East Plaza Garden provides the perfect setting for a ceremony fit for royalty. Not only does Cinderella Castle provide a stunning backdrop for your nuptials, but you can arrive to your ceremony in style with Cinderella’s Coach and for your wedding party a classic turn-of-the-century Main Street Vehicle. 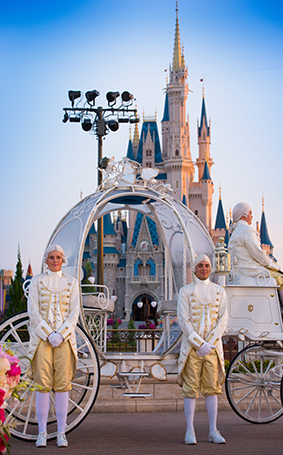 For several decades, Disney Weddings has offered marriage ceremonies and receptions at the Walt Disney World resort, primarily at the Wedding Pavilion located near the Grand Floridian Resort. Venue at the resort hotels and even inside the theme parks have been offered in the past, but typically in private areas inaccessable to regular guests; this is the first time that Disney has advertised daytime weddings inside the Magic Kingdom when it is open to the public.

Now, Magic Kingdom park goers may enjoy unforgettable glimpses of once-in-a lifetime celebrations as trumpeters herald a bride’s grand entrance down Main Street, U.S.A. aboard Cinderella’s glass coach or horse-drawn carriage, as ceremonies are staged in the morning hour just after the official “rope drop” at the park entrance. 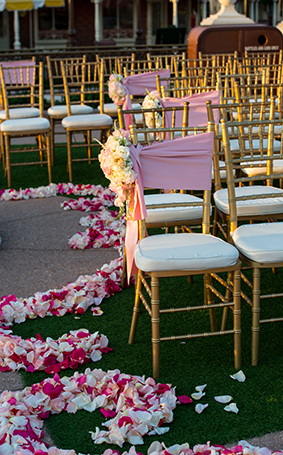 Wedding ceremonies inside the Magic Kingdom will take place at 9:30 a.m., and can accommodate up to 100 guests. “Couples have been seeking a celebratory location showcasing the iconic Cinderella Castle,” said Korri McFann, Marketing Director for Disney’s Fairy Tale Weddings. “We are thrilled to have the opportunity to make those dreams a reality.”

Currently, Disney’s Fairy Tale Weddings package collections start at $2,500, and custom experiences begin at $12,000. Premiere locations such as the Magic Kingdom, with a completely customized ceremony and reception for 100 guests, start at $75,000. You’ll probably need a bankroll that would make Scrooge McDuck envious in order to afford such an event today, but if you’re interested to the folk at Disney Weddings will be happy to help you plan your “happily ever after.”

If getting hitched in the shadow of Cinderella Castle isn’t in your plans, consider what this author did: a wedding ceremony inside the Pavilion, followed by a lunch reception at the California Grill, and finally a private dessert reception at Epcot’s United Kingdom pavilion during Illuminations. Of course, prices for such services were far lower back in 1996 when I got married there. And if your tastes run more towards Potter or porpoises than princesses, the Universal Orlando Resort and SeaWorld’s Discovery Cove also offer wedding services.

For a taste of what a Magic Kingdom wedding in the East Plaza Garden looks like, check out this video: