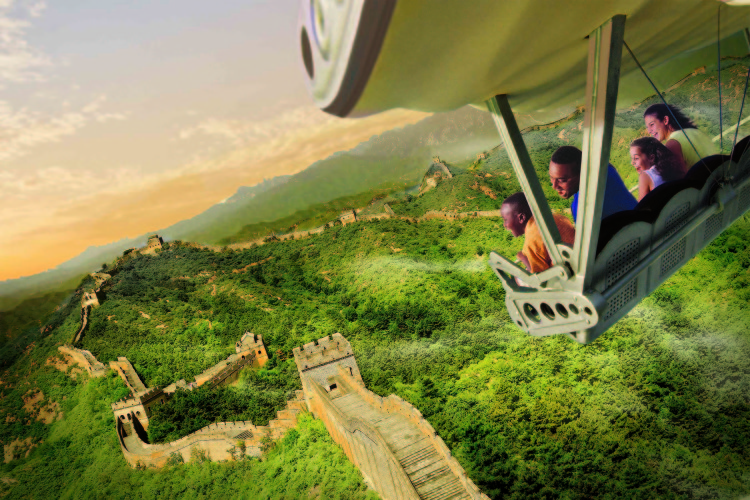 Soarin’ Around the World opens June 17 at Epcot in Walt Disney World.

Epcot’s most popular attraction is about return after a huge update, and Walt Disney World has unveiled some new details about Soarin’ Around the World ahead of its June 17 opening in Florida.

When then new version of Soarin’ debuts this summer, guests will take flight above The Great Wall of China, journey over the Great Pyramids of Egypt, and dash through the Eiffel Tower in Paris. These are just a few of the more than a dozen ways guests will be able to experience the wonders of the world on Soarin’ Around the World, which premieres June 17 at Epcot in Walt Disney World Resort, just after the attraction’s June 16 debut at the Shanghai Disney Resort. In addition to the new film, a third theater and re-imagined interactive queue will be added to the attraction at Epcot.

Employing high-definition, laser-projected footage and motion-based ride technology, all developed by Walt Disney Imagineering, Soarin’ Around the World lifts 87 guests at a time 40 feet aloft into an 80-foot projection screen dome. The effect is that guests’ entire field of vision is filled with panoramic beauty, giving them the sensation that they are actually flying over the globe’s grand landmarks, natural and manmade.

In Shanghai the attraction will go by a different name, Soaring Over the Horizon, to better fit its location in Adventure Isle at Shanghai Disneyland because of its spirit of exploration and discovery.

Soarin’ Around the World is also enhanced by its majestic musical score, composed by Bruce Broughton, based on the original Soarin’ score by the late film and television composer Jerry Goldsmith, and performed by the London Studio Orchestra.

While waiting for your departure time, enjoy this video previewing the new attraction (with temporary music):

Soarin’ Around the World preview and filming for updated attraction

And as an added bonus, here is a full POV video of the original Soarin’ ride film:

Sprinkles Bakery and Cupcake ATM opens May 15 at Disney Springs