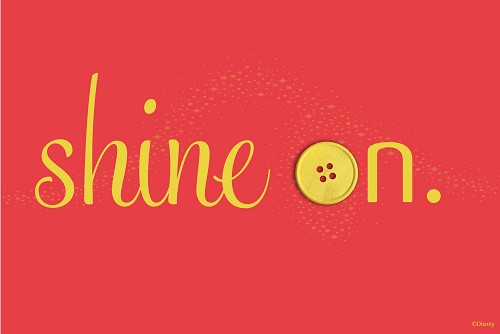 Disney is apparently working on a project that will somehow improve life in Central Florida, but isn’t saying exactly what that project is until May 11. Today, they sent out this somewhat cryptic press release:

Bright red banners sporting the phrase “shine on” are being spotted all over Central Florida. Reports of sightings have come in from Orange, Osceola, Lake, Polk and Seminole counties. Pictures of the banners in locations such as Lake Eola and downtown Celebration have been sent to the Walt Disney World Community Relations team.

Does the yellow button on the signs indicate a Disney connection? When asked about the “shine on” banners, Eugene Campbell, vice president of Community Relations for Walt Disney World Resort wouldn’t confirm a potential tie but said “we are always looking for ways to invest in the community to help make Central Florida an even better place to live, work and play for our nearly two million neighbors.”

What’s behind the banners? Keep checking www.shineontoday.com for hints. All will be revealed starting May 11.

Visiting shineontoday.com right now simply forwards visitors to the Walt Disney World Public Affairs site featuring the above release and a few images of “Shine On” banners placed around the Orlando area.

Come back here on Monday, May 11 for the rest of the details as they’re released.

Video and Pictures of Toy Story Mania for Nintendo Wii

Universal Orlando’s holiday treats and where to...