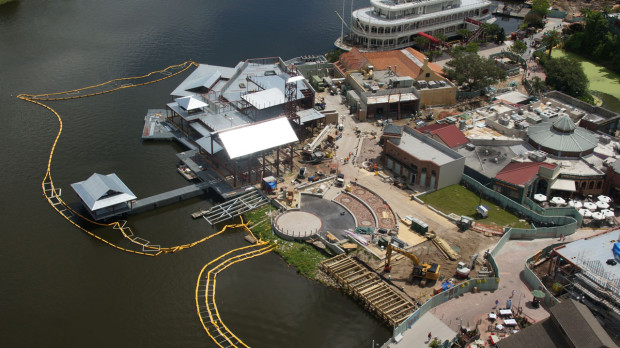 There’s been steady progress in the transformation of Downtown Disney into Disney Springs next spring. It also looks like some of the plans have been modified or are changing. Here’s current status of the construction.

This tour begins at the Disney Springs shoreline. This area was once the site of three Pleasure Island nightclubs. The roof is taking shape on a new building and tower. There’s also a new amphitheater. 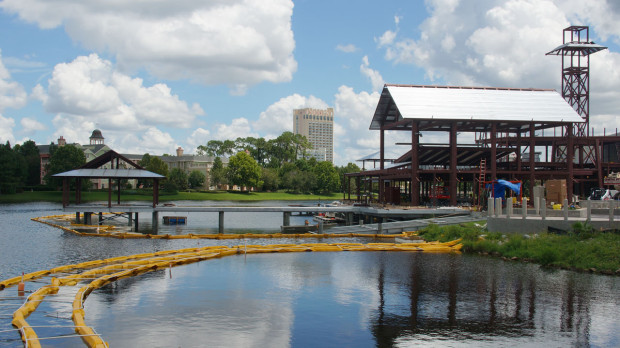 A new pier has also been built into the lake. This area is about the mid-point of Disney Springs. This pier might become the primary or central boat dock for guests at Disney resorts along these waterways. 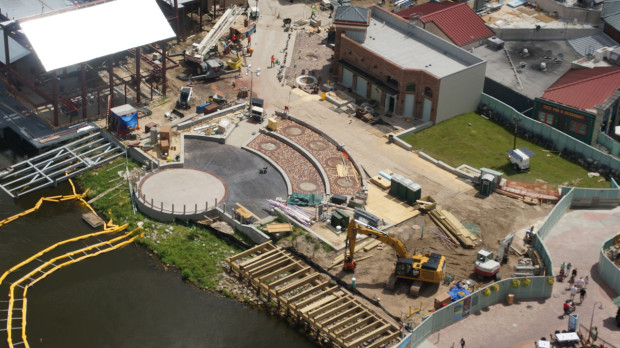 An amphitheater was planned here when a project called Hyperion Wharf was proposed in 2010. A wharf (or deck) is being built here. It is said that Disney Springs will have different zones, representing different time periods of development. Do you think they might call this section “Hyperion Wharf”? 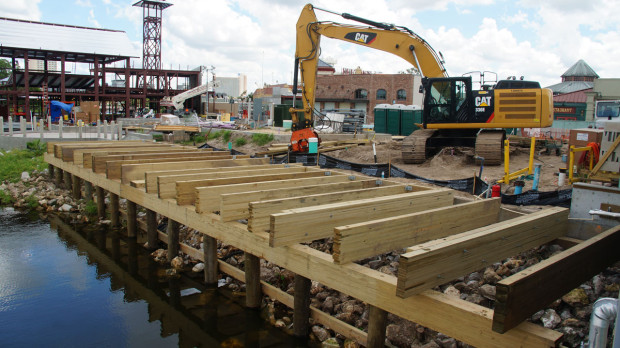 Ground view of the new wharf (or deck). 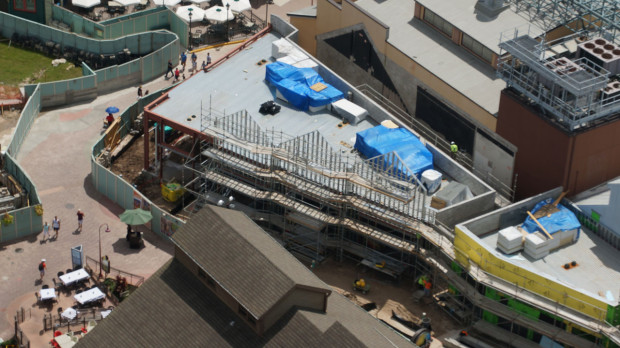 This area, next to the former Mannequins nightclub, used to have a one story series of retail shops. The shops were split in multiple elevations up the Pleasure Island hillside. A brand new, much taller building is here now. Construction is underway on the facade. 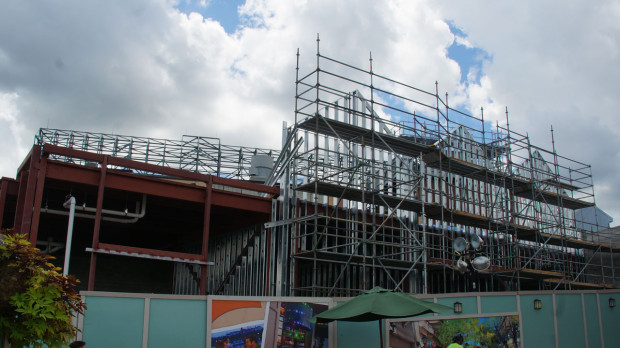 A look at the facade. This building is across from the Paradiso 37 restaurant. 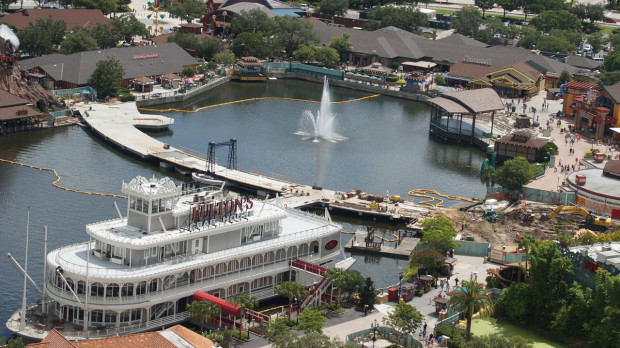 The new bridge across the lake seems to be ready for theming and structures. A iron bridge arch has been up for a few weeks. 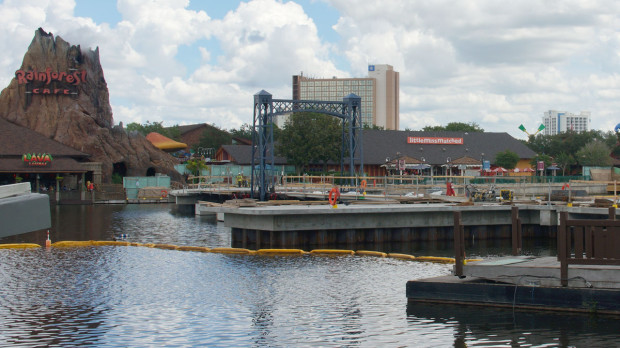 Ground view of the new bridge and themed ironwork arch. 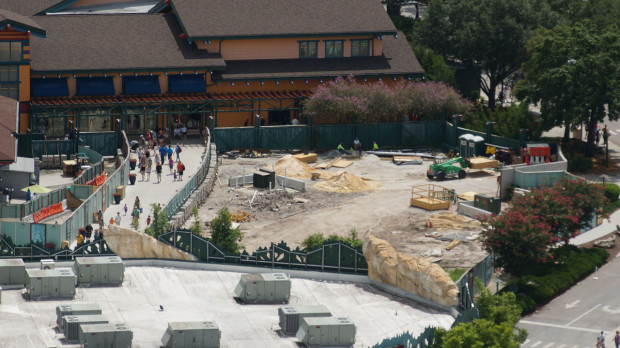 A McDonald’s and then a Pollo Campero restaurant used to be at this site. After that building was torn down, there were signs saying this would be one of two food truck parks at Disney Springs. 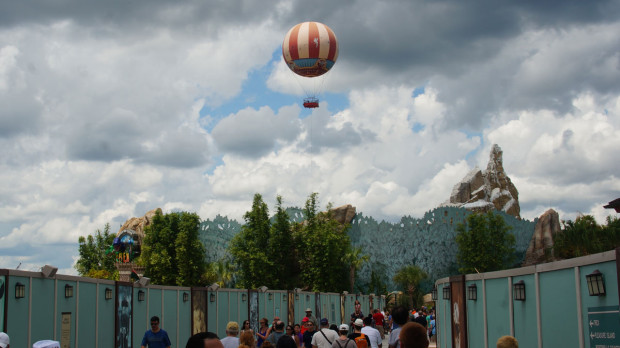 View from the ground where the McDonald’s and Pollo Campero used to be.

In the distance is the T-Rex restaurant, The T-Rex building theming makes Characters in Flight seem like it is flying above a fantasy movie skyline. 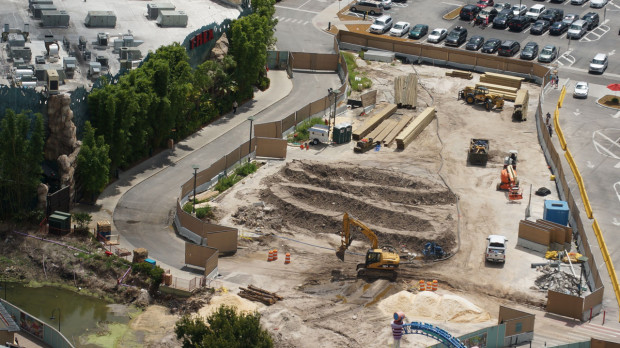 Behind the T-Rex restaurant, is an area that is interesting to consider. However, it probably is just construction staging. 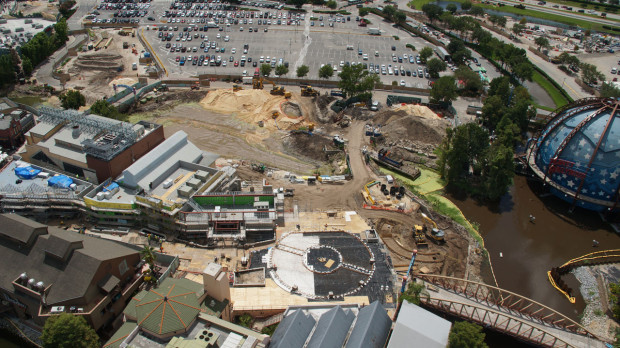 The large expanse of dirt at center of this photo used to be a waterway, extending from the Planet Hollywood area. It looks like the area has been reclaimed. Possibly for new retail and dining. This area will be adjacent parking structures where you see surface parking now. 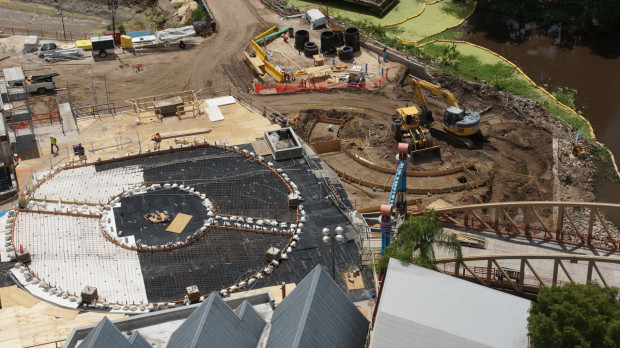 The half circle to the right is interesting. What is being built there? 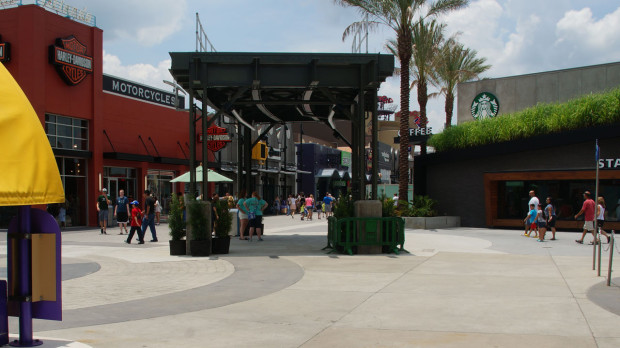 Across the bridge is this 30 foot section of what seems to be the Disney Springs High Line.

Some explanation … there’s a new park in lower Manhattan. It’s a converted elevated railway, called the High Line. New York City residents love the High Line, it is incredibly popular. Cities around the world are looking into duplicating this success.

This raised area is like a Disney Springs High Line. The storyline tells of abandoned railroad tracks. 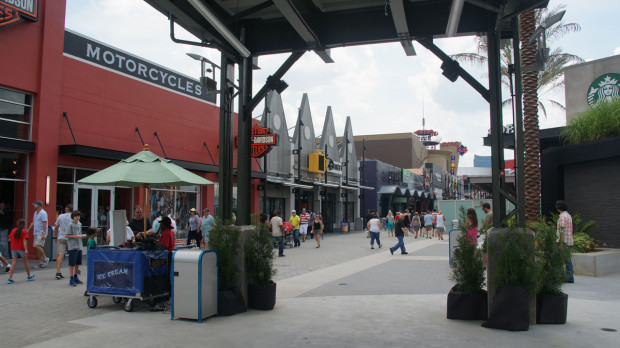 This photo is from July 19, and shows that guests could freely walk under and through this area. 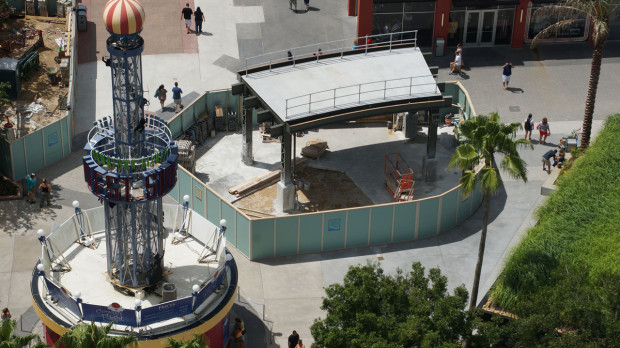 This photo is from Aug 9, and this short section of High Line is now closed off. Some concrete at the base has been removed too.

It could be that this is a test in progress. 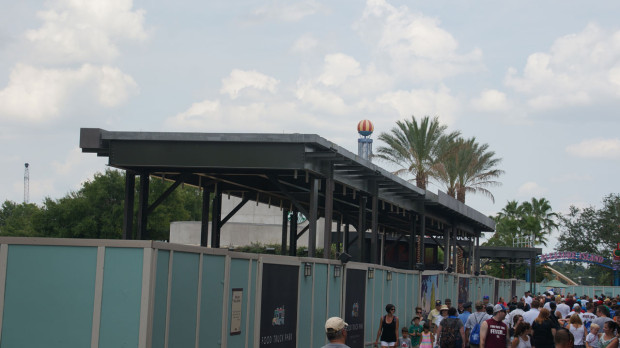 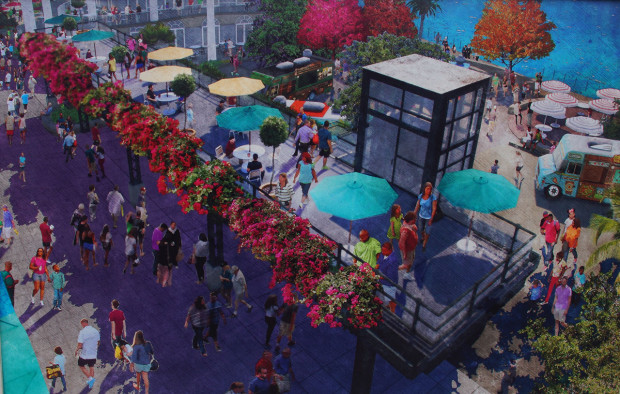 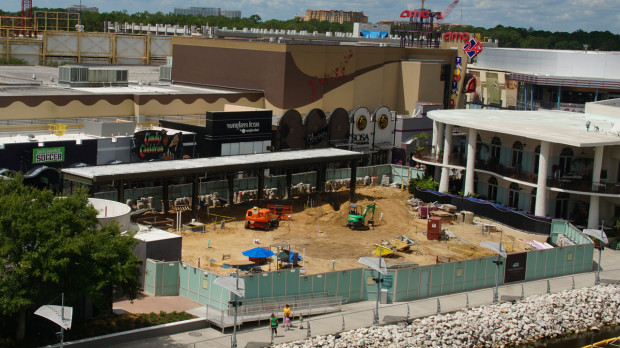 Signs along this construction wall still say a food truck park is coming Summer 2014. It doesn’t seem like the park will be opening in August. 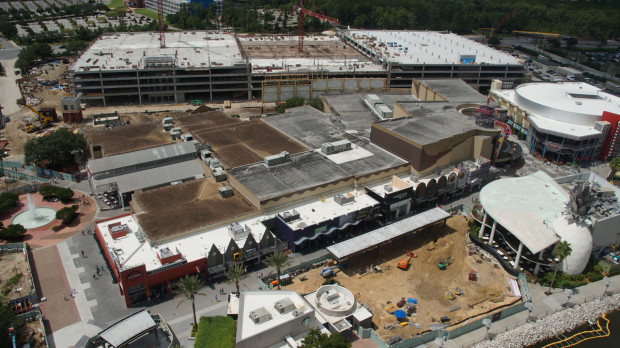 This view shows the two High Line sections, as well as the current state of the first parking structure. There’s one more level of parking remaining to build in the center section.’ 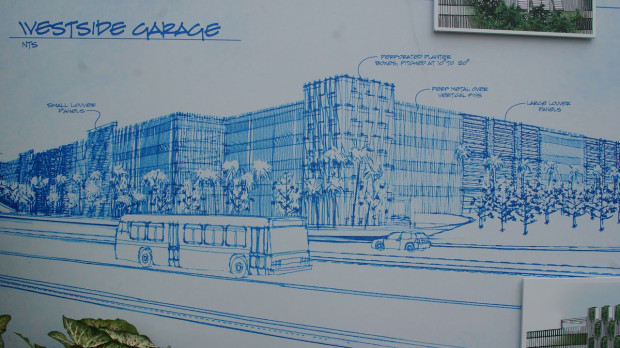 Concept artwork on walls around the parking structure. 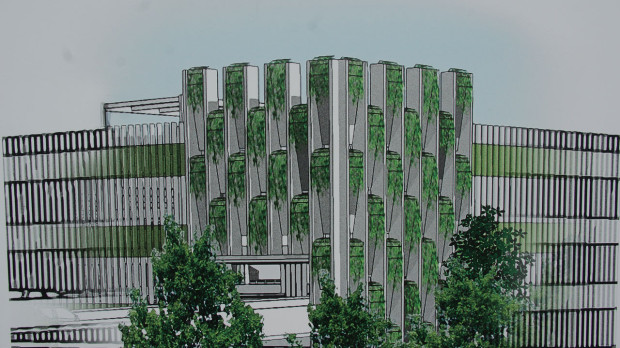 A color concept shows that the parking structure might be lined with hanging greenery. 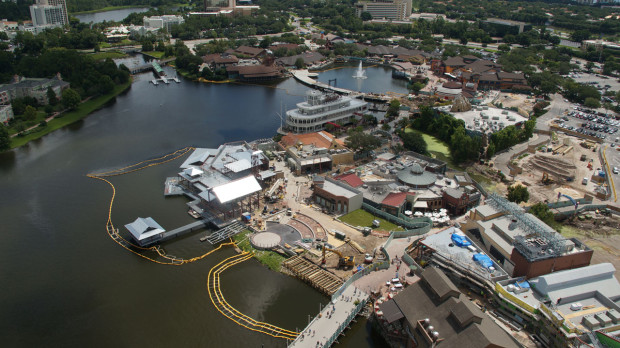 Stay tuned as we continue to watch Disney Springs be built!

At down town Disney will they be bring back cpt. Jacks.

We are just wondering with all this new design and renaming are they going to be looking at charging for parking down there, hope not because we go 6+ times when ever we come over the pond and has always been free to park there. It will be a shame if they do start charging

Movie Review: ‘Inside Out’ not Disney•Pixar’s best...