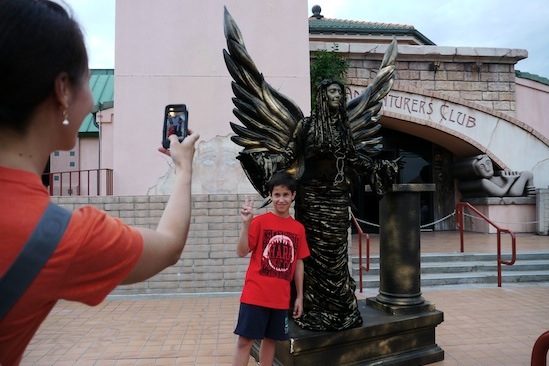 During a trip to Pleasure Island last night, many different acts were taking turns entertaining the crowds as Disney managers looked on. Acts were set up in the spot where Celebrate Tonight performed, in front of the old BET Soundstage Club and in the steps in front of the old Adventurers Club. A Disney manager we talked to said they’re trying out some new options and that guests may see these acts in the future, or they may see different ones. 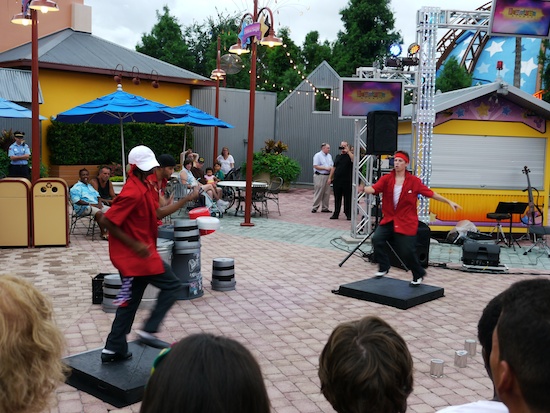 This group of guys were dancing and using buckets and cans as drums. They would perform about a half-hour then the classical music group Nova Era, who usually perform down by Fulton’s Crab House, took over for a 20-minute to half-hour set. 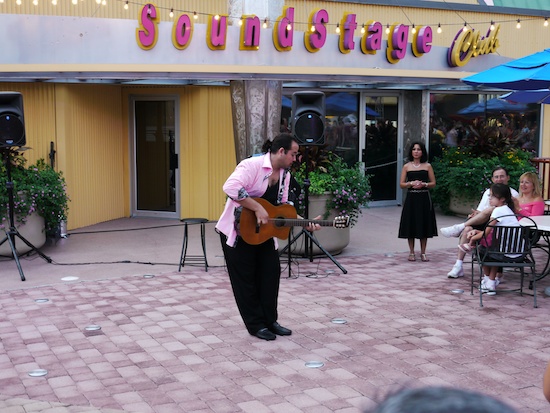 Across from that area was this Spanish guitar player. 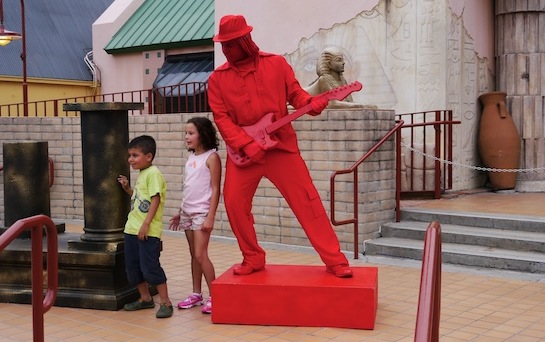 But the most popular performances were the “living statues”. The bronze-looking angel (top photo) and this red guitar player statue seemed to be a hit as guest after guest posed for pictures with them.

Here’s a video of the statues in “action”.

Out of the Loop: A look at Disney's World of Color – Photos/Videos

Pretty sad when you had an amazing one of a kind experience with The Ad Club, Comedy Warehouse and more. It’s not too late to SAVE PI Disney!!

This is pathetic, and frankly makes me angry considering what PI used to offer for entertainment. Shuttering PI is the second-most-boneheaded thing WDW has done in the past 10+ years, right after demolishing Horizons.

I always wanted to go to PI when I was old enough to experience an entertaining time as an adult after the parks but I guess I’ll never get that chance for now anyways.

It is a shame that PI closed when it did … For the most of the season months, PI was packed! And then there was CM nights and just local nights .. supporting local bands in the beach club and so forth … they need to bring that back .. it was a great place for adults to hang out and enjoy themselves if they didnt want the Mickey Mouse always in their face. … Bring back PI WDW … please

It was great place for adults, now it’s great to, more for familys and kids… It’s Disney… It’s good to find a ballance from before and now… My kids love the entertainment, Love Statues! We have a great time. Thank you Disney and hope you will continue, it’s great fun.

My family and me we have great time… Red guy was fun, my kids love it… We realy like all and specialy amazing angel statue. Very new and refreshing stile in this art form…

You can see any of this on a street in NYC. What makes Disney unique is the opportunity to see things there you can see nowhere else. Disney should bring back unique entertainment and not recycle ideas from streetscapes in major metros.

I wouldn’t mind seeing the Bronze Statue being used in a new and improved Adv Club!

It is very sad to see the entertainment that is going on compared to what was. Bring back the Adventurers Club!!
I brought my nephews there and it was very kid friendly!!

Skip the crap and bring back the Adventures Club and the Comedy Club!

They’ve already got a bronze statue in the club, God With Rod. Kungaloosh!

Bring back the Adventurer’s Club! NOW! How pathetic and tacky to try to pass off this kind of crap, especially from Disney I am very disappointed in the company. It seems like they get rid of what people like and give the customers crap. When no one shows up for this pile of camel dung, they will see. They are saving a nickel here to try to placate customrers and it won’t work! The Adventurer’s Club was something all adults loved and looked forward to. BRING IT BACK!!!!!!! NOW!!!!!

This answer is for David. Adults should have some places that children cannot go. PI was that place and folks loved it. The whole Resort caters to families and to take the ONE thing that adults loved away is sad. The families had the rest of WDW Resort, I guess they wanted EVERY songle piece of it. Well, you got your wish, adults have really no place to go on property to enjoy themselves WITHOUT kids.

Not everyone that goes to WDW has kids, remember that. And I think Disney should understand that and not take away the one place that adults had funa nd oculd get away for a little R&R. The Disney Cruise Line knows that adults do not weant to be around their own kids all the time and has adult only pools and places to go.

Why not WDW? I for one, would love to see an all adults resort, no kids allowed in the resort ever, for any reason. How refreshing that would be, no kids screaming and running up and down the halls, knocking on all the doors at 5 AM, no kids splashing everyone in the pool. Hey, an adult may even get to swim laps and not just stand there in the middle of a crowd of screaming children.

An adult resort without kids and none allowed on the premises at all for any reason would be heaven! Adult only restaurants! Adult only pools! Adult only shops and spas and lounges….Ahhhh, Disney, build this one! You will have reservations for the next 100 years, believe me. After speaking with many adults, they all agree that would be the one heavenly thing to add to WDW!

And don’t tell me I don’t belong at Disney if I don’t want kids swarmijng all around me, I LOVE Disney and will deal with the screaming and splashing to get my little taste of the magic.

Please make PI the great area of WDW that it used to be. We visit every year from California and was heartbroken when we brought family with us last year to the boring mess that is now PI. What happen to New Years every night? We will return next May . Please make it worthy of Disney again. Poor Walt would be so disapppointed to see what’s happen to this part of his world.

We need a place at Disney where there aren’t children, they have the whole park. PI was that place. Loved all the clubs, a fun place for adults. Now we will just go to Vegas, remember when they tried to make that “family friendly?” PI was the only place that was just for adults at Disney. A big night club is needed on property, not more family fun, there is enough of that. Will vacation somewhere else until I see it back, especially our Adven. Club. Disney, you goofed up on this one.

Disney seems to be going through a lot of messy choices, let’s hope they choose the right entertainment options. And be a little considerate to the adult populace since nobody is going there without company=)

i love disney decide to make PI for families and have amazing entertainment, love spanish guitar player! amazing and very popular statue show! kids love it! all the families having fun! truth before i have my kids i was enjoying the clubs but now its good to have PI family friendly where you can go after work with friends and family and relax…

i think your decision to shut down the clubs was the worse thing disney has ever done i have not been to disney since this was done i am very angry at the corporate leaders of this company i hope you suffer with this outcome..