Out of the Loop: A look at Disney's World of Color – Photos/Videos 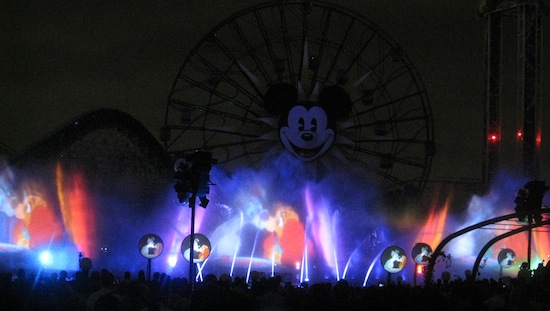 The huge world premier for Disney California Adventure’s World of Color has come and gone. World of Color is Disney’s newest nighttime show. The show celebrates the beautiful colors seen in Disney movies, but it is really a multi-sensory experience. You see the colors. You hear the familiar musical scores. You feel the heat of fire and cool of a wet “rain”. Your heart feels the vast range of emotions we experience watching Disney films

I was fortunate to see World of Color on the premier weekend. The quick and easy verdict – it’s a winner; it is the best one they have. Technologically, it’s superior to any American Disney night show (I’ve not seen any Disney European or Asian Disney shows). Read about the technology here. However, it goes beyond technology. 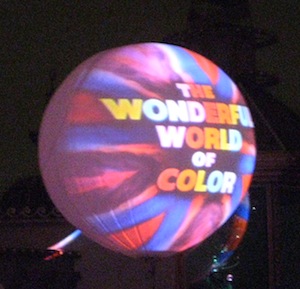 World of Color takes components of other shows and raises the bar even higher. I remember being in awe the first time I saw Disney images projected on screens of water in Fantasmic. These images have evolved into crisp high-definition scenes projected on gigantic moving walls of water that make the characters come alive. Perhaps you have seen the fire used in Illuminations at Epcot. Fire in World of Color is weaved with water to create a wonderful effect and just for a wow-factor, at the end of the scene, Disney cranks up the guns and flames shoot dozens of feet into the air for a good 10 seconds. I could literally feel the heat.

On a recent trip to Disney Hollywood Studios, my family and I caught a performance of Voyage of The Little Mermaid. In that theater, Disney creates a feeling of being under the sea. You see waves and bubbles, and you even feel a little spray of water. This feeling is recreated on a massive scale in World of Color. On a palette wider than a football field, blue lasers projected on water create a feeling of a churning sea. Bubble machines placed throughout the viewing area shoot thousands of bubbles into the air. What of the spray? Well, let’s just say on a cool night, I’d consider a raincoat.

I’ll admit it, I am a Disney fan boy. However, I should point out some criticisms. After the show, my wife was amazed and disappointed at the same time. She missed most of the bottom forth of the show. We are not tall people. I stand 5’6” and she about 5’4”. I thought by getting a reservation at the newly renovated Wine Country Trattoria complete with 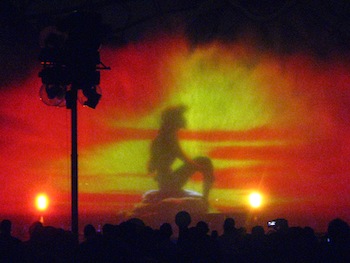 preferred viewing for World of Color, we would be set. This tactic has worked for us in the past for Fantasmic at Hollywood Studios. Unfortunately, the viewing area at Paradise Pier is not the stadium style seating like at Hollywood Studios. It is a series of progressively lowering cement landings. I believe the ideal viewing, besides the very front, would be on the steps separating the landings or the very front of each flat landing. I really have no idea how my children would have been able to see. The best kids’ viewing areas would be snatched up well over an hour before show time. My kids wouldn’t sit that long. Also, I saw at least two guests approached by cast members during the pre-show telling them to take their children off their shoulders, citing safety issues.

An additional criticism comes in one scene of the show. Every single other scene of World of Color is a nod to Disney animation. Well, that makes sense. With animation, be it classic hand drawn or computer generated, an artist chooses the colors the audience will experience, thereby helping to guide the feel and emotion of a scene. How then does Jack Sparrow fit into this? In a several minute sequence, several characters and symbols from the Pirates of the Caribbean series are prominently featured. It is the only live action film in the show. It is modern, it is hip, and Johnny Depp is arguably the biggest Disney live action star right now. But, to me, it doesn’t fit.

There is one final criticism to mention. The Paradise Pier area is ground-zero for the California Adventure renovation. In addition to World of Color, several of the feature attractions are going in including The Little Mermaid ride in 2011. The look of the area is spectacular with the boardwalk, California Screamin’, the midway and Mickey’s Fun Wheel. However, if one looks down into the lagoon, they see 1,200 water nozzles poking up above the water. The look is less than aesthetically pleasing. I want the lagoon to look like a lagoon and wish the nozzles could remain “backstage” until show time. 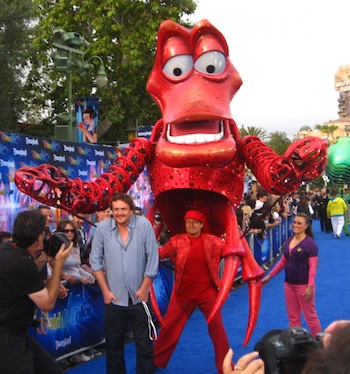 To end on a positive note, let me discuss my favorite parts of the show. I’d be remiss if I didn’t mention the pre-show. Thirty minutes before show time an exciting pre-show got things started. Larger than life Carnivale-style characters make their way into the crowd including Genie, Lumiere, Tigger and others. The crowd instantly came to its feet, sang, and danced. It was fun.

Several scenes define World of Color. There are perhaps too many to mention here. The Pocahontas scene was beautiful. A lush green forest covered the length of Paradise Pier Lagoon. It really illustrates what is possible with this water projection technology on the grandest scale. The Up sequence was more minimalistic, but it made me smile. In a scene that was less than a minute, you first hear balloons bouncing off one another, then you see a huge bunch start to float upward. Talk about a burst of color! The balloons are of course followed by the house. My favorite sequence of the whole show is the montage of Disney kisses toward the end of the show. The scenes chosen were great, the color is stunning, and it is a great start to the finale.

You can find photos and videos below, but as you may guess, none do the show justice. If you are a fan of Disney over-the-top large-scale production that is only possible on site at the parks, then book your reservations and get out there and see this. If you can’t get out there in the near future, don’t worry. It’ll be years before Disney can top it.

Community invited to find out more about Legoland Florida

Free beer is back at Busch Gardens...