Disney has announced that its live-action release previously known as 1952 will be titled “Tomorrowland”. The film is set to be released on Dec. 19, 2014 and George Clooney (The Descendants) is set to star. 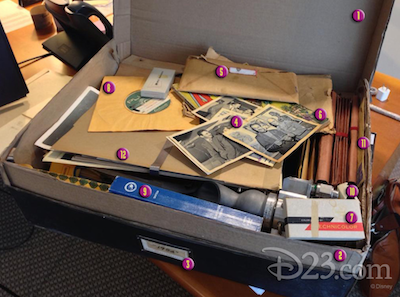 Tomorrowland is written by Damon Lindelof and Brad Bird. Lindelof (Star Trek, Lost, Prometheus) will produce and Bird (The Incredibles, Mission: Impossible- Ghost Protocol) will produce and direct. It is still unknown if the film will relate to Tomorrowland at Disney Parks but it is rumored by some that it may be about Walt Disney’s creation of Disneyland. Bird and Lindelof both recently tweeted photos of a box dated “1952” full of vintage items that are said to be the inspiration of the film. The box features pictures of Walt Disney and other Disney related items. D23 turned to Walt Disney Archives Director, Becky Cline, unraveled some of the details of what she saw, click here to find out what she had to say about each of the items.

Speaking of Disney Parks going to the screens, ABC has ordered a pilot to a new drama based on the Big Thunder Mountain attraction. The show, entitled “Big Thunder” and will be a dramatic take on the attraction written by Jason Fuchs (Ice: Age Continental Drift). Chris Morgan (Fast & Furious) is set to executive produce. The drama revolves around “a brilliant, late-19th-century New York doctor and his family who are given a once-in-a-lifetime opportunity to relocate to a frontier mining town run by a powerful but mysterious tycoon. They quickly realize that not everything in Big Thunder is as it seems.”

Thunder Mountain is not the first Disney ride to receive the Hollywood treatment. The Pirates of the Caribbean attraction spawned four popular blockbuster films, while The Haunted Mansion and Matterhorn attractions, and even a film entitled “Disney’s Magic Kingdom” are all in the works for the big screen. The “Magic Kingdom” project is being developed by writer Michael Chabon and director Jon Favreau. The film is about a family in the park and an alternate reality version of the park they wander into.

Bands, Brew and BBQ is back for 2013 at SeaWorld and Busch Gardens