Disney VoluntEARS to celebrate 30th anniversary throughout May 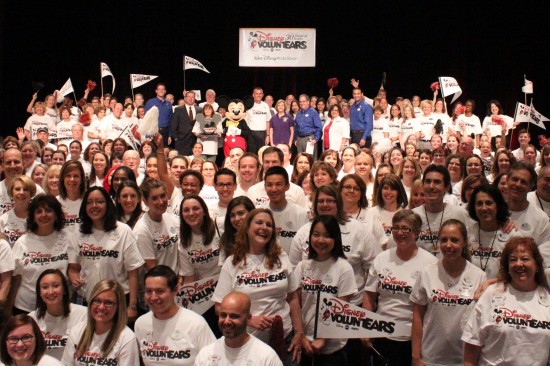 More than 250 Walt Disney World cast members were joined by Mickey Mouse at a pep rally today to kick off a month-long celebration for the 30th anniversary of Disney VoluntEARS.

During the month of May, cast members around the world will commemorate the 30-year milestone by participating in activities that promote the happiness and wellbeing of children and families, strengthen their communities and inspire others to volunteer. At Walt Disney World Resort, thousands of Cast Members have committed to nearly 50 volunteer activities over the next 30 days, from serving meals to the homeless, to building playgrounds in local neighborhoods and caring for rescued animals.

“Walt Disney World is proud to be a member of the Central Florida community,” said George A. Kalogridis, president of Walt Disney World Resort. “We live in a dynamic community with many needs, and our VoluntEARS invest their time and talents in a variety of endeavors. Through them, we inspire children and families, revitalize our environment and improve the quality of life.” 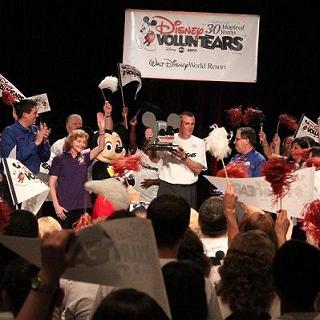 As part of today’s event, the Walt Disney World Resort recognized the Disney’s Animal Kingdom Community Involvement Team as the VoluntEAR Team of the Year and veterinary assistant Liz Hedrick as the Disney VoluntEAR of the Year. Hedrick and the Animal Kingdom team received $3,000 each for the charities of their choice – Wildlife Rehabilitation of Central Florida and the SPCA of Central Florida.

The VoluntEARS program started at Disneyland Resort in 1983 as a way for cast members to focus their volunteer efforts in a more meaningful way. The team achieved great success in their support of charitable organizations and that momentum led to a company-wide launch of the Disney VoluntEARS in the early ’90s.

Here is a look at the full pep rally held at Disney’s Coronado Springs Resort:

Disney pep rally to kick off 30th anniversary of VoluntEARS

Transformers: The Ride 3D to open June 20 at Universal Orlando