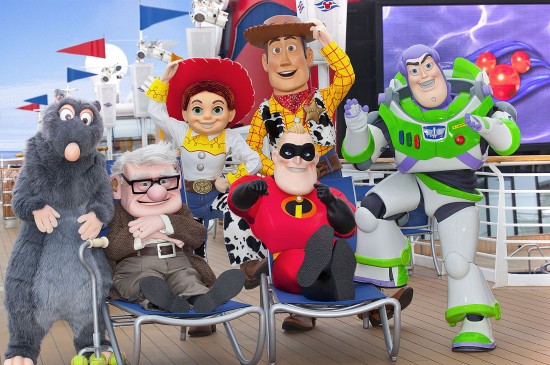 A new cast of characters will stroll the decks and visit with guests aboard the Disney Wonder as Mr. Incredible, Remy, Woody, Jessie, Buzz Lightyear and other characters from Pixar Animation Studios’ films make their shipboard debut during four special Pixar-inspired seven-night California Coastal cruises Sept. 16 through Oct. 14, 2012.

During these voyages, Disney Cruise Line guests will be able to interact with and explore the world of Pixar while the Disney Wonder sails to popular port cities along the coast of California. Special entertainment and offerings include:

The Disney Wonder will sail out of Los Angeles and visit San Francisco, San Diego and Ensenada, Mexico during the four Pixar-themed voyages. Rates for the seven-night voyages start at $799 per person for a deluxe inside stateroom, based on double occupancy. To learn more about Disney Cruise Line or to book a vacation, visit disneycruise.com or call Disney Cruise Line at 888/DCL-2500.

Videos and Photos from Disney’s ‘Unleash the...