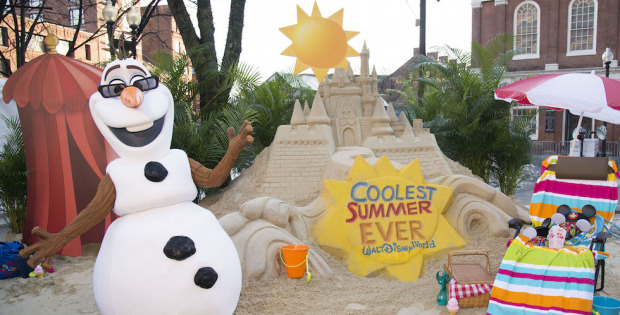 Walt Disney World Resort is once again celebrating “Frozen” this summer and also once again bringing back the fan-favorite 24-hour day at the Magic Kingdom.

The “Coolest Summer Ever” begins with 24-hours of fun during a special event May 22-23 at the Magic Kingdom. The day will be hosted by Olaf, the summer-loving snowman from Disney’s animated hit “Frozen.”

Magic Kingdom will be open from 6 a.m. to 6 a.m., Friday May 22 to Saturday, May 23, 2015, Memorial Day weekend. Guests are invited to come in costume to show their Disney Side while a selection of attractions, entertainment, special event merchandise, plus food and beverage are on tap all night long.There will also be Disney character greetings, dance parties and surprises into the wee hours of the night.

“Frozen” Summer Fun Live will also be heading to Disney’s Hollywood Studios June 17-Sept. 7. Princess Anna, Queen Elsa, Kristoff and Olaf, along with citizens of Arendelle, will be appearing daily in shows and experiences. Much like last year, the event will include a royal processional, a sing-along show, Frozen-themed treats and merchandise, plus a Frozen fireworks display above Hollywood Boulevard.

Watch our video below for a look at the “Frozen” Summer Fun event from last year:

The all-day/all-night revelry of the 24-hour party will include dancing and special character encounters at locations in Disneyland and Disney California Adventure parks, along with Diamond décor throughout the resort.

Can we PLEASE put FROZEN to rest?

What does Disney do with all the...