Jack-Jack has gotten loose again – only this time, he’s in Costa, Mesa, Calif!

Overnight on Aug. 31, the Design & Engineering team for the Disneyland Resort took 8,900 canned goods and used them to create a 10-foot Jack-Jack and his cookie num nums from Disney/Pixar’s “Incredibles 2” for the 11th annual CANstruction Orange County. 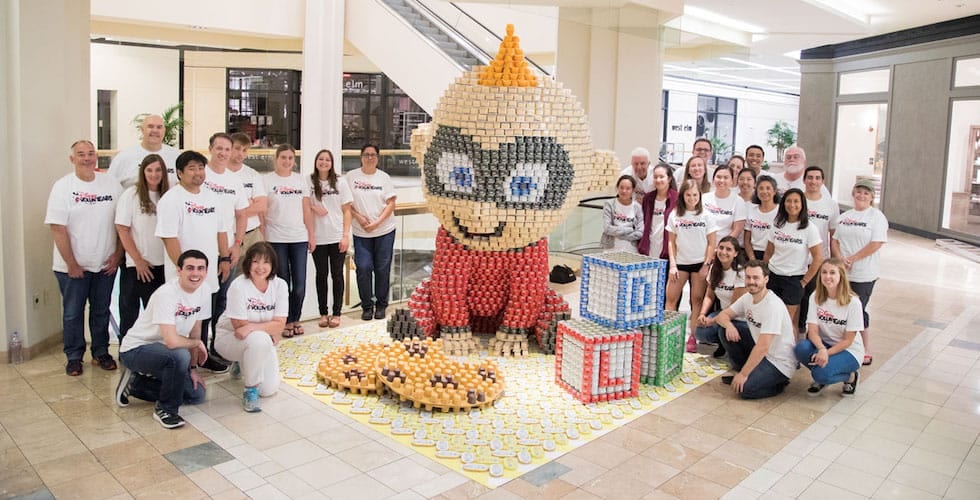 Disney designers and engineers worked to create this massive Jack-Jack sculpture out of canned goods!

Disney VoluntEARS worked to design the Jack-Jack sculpture over a six-month period. You can find him on display at South Coast Plaza in September before the cans are donated to the Orange County Food Bank.

“We utilize the talents of graphic designers, architects, engineers and we develop some other specialized skills to accomplish our finished sculpture,” said Andy Flores, an associate engineer at Disneyland Resort.

“Could we just donate a huge pile of cans? Sure,” said Tim Angers, staff engineer at Disneyland Resort. “But doing it this way – it increases public awareness. It shows people how big the need really is, and hopefully, we can make a bigger difference than just the cans we donate.”

Supporters can vote for their favorite sculptures online for $1 per vote, with the proceeds going to the Orange County Food Bank. Over the past 11 years, Disneyland has provided the organization with over 69,000 miles for the local community through the CANstruction event.

“Disney cast members have helped educate people about the issue of hunger in a creative and compelling manner through magical and visually stunning structures that have entertained people,” said Mark Lowry, director of the OC Food Bank. “Most importantly, they have provided additional food to expand the capacity of the OC Food Bank to combat hunger.”

To check out all of the structures, and vote for your favorite, visit CANstructionOC.org/Vote.

Check out this video of the work it took to build the Jack-Jack structure below: