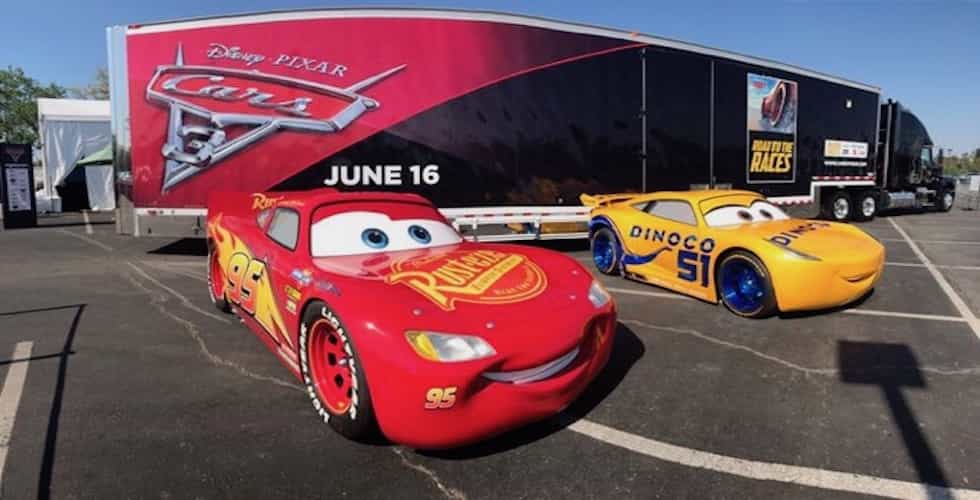 The Road to Races Tour for “Cars 3” kicks off at Disney Springs on Thursday, March 23.

This month, Disney is taking “Cars 3” nationwide with Road to the Races, a tour inviting fans of the “Cars” films to come and celebrate the upcoming release of the newest film. Fans will be able to see life-size versions of Lightning McQueen, Cruz Ramirez, and the next-generation racer Jackson Storm as they roll through 27 cities across the country.

“We are going to kick off the tour at Disney Springs in Walt Disney World on Thursday, March 23,” said Lylle Breier, senior vice president, worldwide marketing partnerships and special events for the Walt Disney Studios. “There will be fun activities for the whole family—plus a sneak peek of the movie.”

Some of the cities on the national tour include Dallas, Miami, New York, and Los Angeles, but you can find the entire list of tour stops at cars3tour.com. The final stop on the Road to Races tour will be in California at the Sonoma Raceway on June 24 and 25.

There will be many sponsored activities for fans to enjoy during the stops along the tour:

Not only will fans have all this fun to take part in , but they also have a chance to catch a sneak peek of the film in the Cinetransformer Mobile Movie Theater, as well as take photos with the life-size cars themselves.

NASCAR will also take part in the Road to Races tour by using their national youth program, NASCAR Acceleration Nation, to showcase the science behind racing, as well as display pieces from the NASCAR Hall of Fame.

What about the Pacific Northwest???? We get no love up here in Seattle. That tour looks like it will be really cool, oh well.

They were in cherry hill nj for 1 of the 3 days they were suppose to because of the rain so the one day they were there they stayed open 11 -4 and wouldnt let fans in line after 3;30 you’d think because they weren’t there the 1st 2days they’d stay open a little later we will not be going to see movie in theater

The Attractions Show! – Epcot Festival of...

Out of the Loop: Tokyo Disneyland reopens...