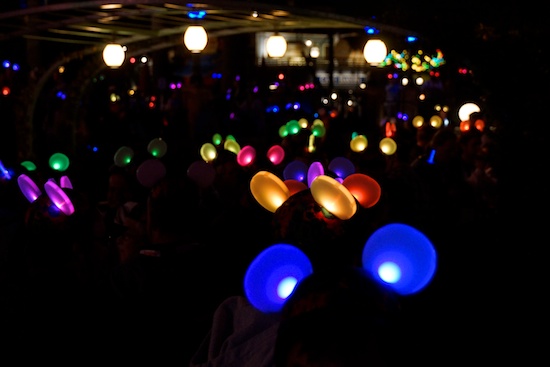 After debuting last year at Disneyland, many wondered when the Glow with the Show, Mickey ear hats would come to Walt Disney World. Wonder no more, as they will make their debut next month. The hats will change colors in sync with fireworks, shows and each other at Magic Kingdom and Disney’s Hollywood Studios.

They will debut on Oct. 15 during the 15th anniversary of Fantasmic!, the nighttime spectacular at Disney’s Hollywood Studios. And beginning Oct. 19, guests will be able to experience the Wishes fireworks at Magic Kingdom with the hats.

These magical Ear hats glow in myriad colors, commanded with the latest technology to complement the imagery and beat of the fireworks and shows. When not activated by these experiences, surprises are in store as the magical ears glow with other ears and different areas around Walt Disney World.

“Technology allows the ear hats to dance and play along with each musical and illuminated sequence. They truly bring the show’s environment out of the lagoon and the sky, and into the audience in an amazing and dazzling new way, making our guests truly Glow With the Show,” said Dara Trujillo, manager of merchandise marketing, communication, synergy and integration, Walt Disney World Resort.

During the holiday season, guests can don their hats and “glow” with Spectacle of Dancing Lights at Disney’s Hollywood Studios, and at Holiday Wishes fireworks display and Celebrate the Magic, the nighttime projection show at Cinderella Castle at Magic Kingdom.

Each set of Glow with the Show Ear hats will be available for $25 at select locations throughout the Magic Kingdom and Disney’s Hollywood Studios.

For more than 55 years, the classic, black Mickey Mouse Ear hat has been a Disney Parks favorite and signature souvenir item. Across the decades, there have been more than 200 different ear hats including limited and novelty editions.

Here’s a video of the light-up ears in action during the World of Color show at Disney California Adventure:

Doctor Who convention to be held in Orlando this November

I like this idea, and I’m glad we’ll be getting it out on the East coast. But don’t forget, this isn’t the first time you’ve been able to purchase items that interact with the parks! There were the Magical Moments pins in 2003 which would flash during shows or in rides, Pal Mickey in 2005… I wish Disney would continue to support and upgrade these old systems so that return visitors aren’t left with “interactive” merchandise that no longer interacts with anything! That makes me wonder how long these things will actually work before Disney stops servicing the transponders around the parks that are responsible for triggering them.

One thing’s for sure, I’d much rather look at a bunch of pretty light-up Mickey ears in front of me during a parade/fireworks show/nighttime spectacular than the bright, distracting screens of inconsiderate jerks trying to record the entire thing on their iPad, tablet, or phone, and blocking everyone else’s view in the process! Why bother recording something you could easily watch on YouTube? Save your storage capacity for pictures and video of you and your family and/or friends enjoying the parks rather than wasting it to record shows that have already been recorded by dozens of people in much higher quality than your tablet/phone camera can capture.