An issue with the cooling system at Disney’s Hollywood Studios caused all attractions except for Muppetision 3-D and Star Wars Launch Bay to close for an extended period today. 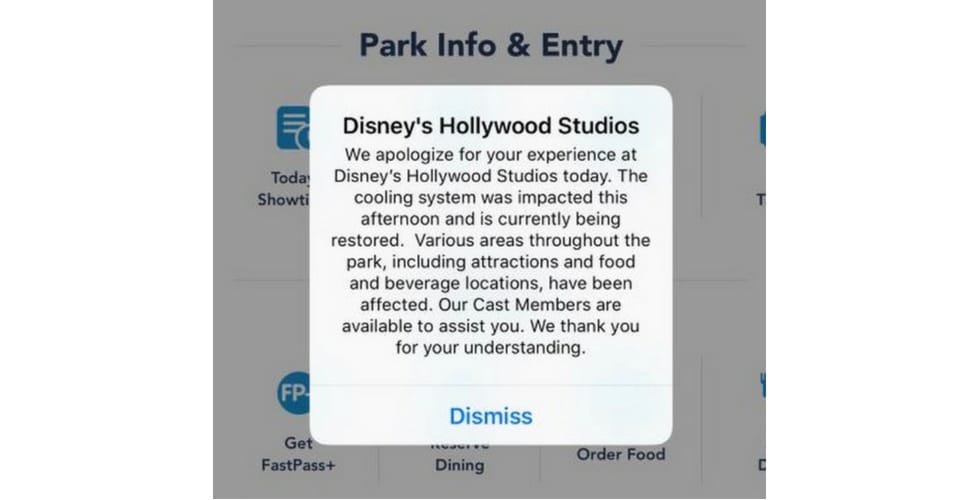 This is an alert that guests in the parks received as a result of the cooling issue at Disney’s Hollywood Studios today. Photo by @disneyitgirl on Instagram.

According to an alert received by guests on the My Disney Experience app, the cooling system is currently being restored, but that it has affected various locations throughout the park, including attractions and food and beverage locations.

A look at the ride closures at Hollywood Studios. Photo by @disneyitgirl on Instagram.

Rumors on social media suggested a fire was the cause of the cooling system malfunction, but no other information has been made available at this time.

Heard it was a fire in the a/c plant.

UPDATE: As of about 7:15 p.m., most attractions at Disney’s Hollywood Studios are up and running as normal now.

Most attractions are up and running now. I can confirm Alien Swirling Saucers And Slinky Dog Dash are back up. @Attractions pic.twitter.com/iLbxG5pWiM

Up-to-date wait times can be found in the My Disney Experience app.