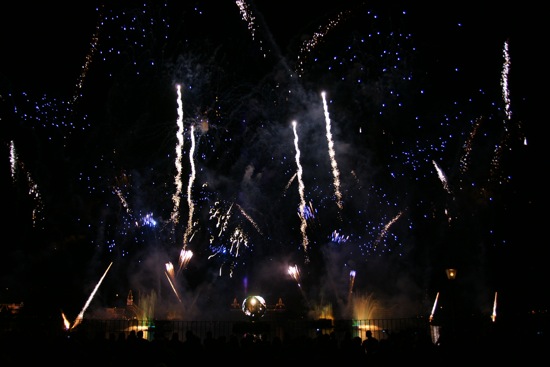 A kaleidoscope of colors and elaborate light displays will decorate the skies on the final night of 2008 at Walt Disney World. Dazzling fireworks showers, live entertainment and extended park hours on Dec. 31 make it a very popular spot to ring in the new year. Expect large crowds and arrive to your preferred park early as some of them may reach capacity.

Disney’s Hollywood Studios
Disney’s Hollywood Studios will host “Fantasmic!” at 6:30 and 8:30 p.m. Revelers can “rock on” with live performances by in-park band “Mulch, Sweat and Shears,” plus a DJ spinning tunes at Mickey’s Sorcerer’s Hat. A special “Lights, Camera, Happy New Year” fireworks show brings in the new year at 11:50 p.m. The park will be open from 9 a.m. until midnight on Dec. 31.

Magic Kingdom
Late-nighters can party at the Magic Kingdom until the wee hours with parades and fireworks galore. The park is aglow with “Mickey’s Once Upon a Christmastime Parade” at noon and 3 p.m., followed by the “SpectroMagic” parade at 7 and 10:30 p.m. “Holiday Wishes” fireworks takes place at 8:30 p.m., capped with the grand finale “Fantasy in the Sky” fireworks at 11:50 p.m. On Dec. 31, the park will be open from 8 a.m. to 1 a.m.

Animal Kingdom
Disney’s Animal Kingdom will be open from 8 a.m. to 8 p.m. on Dec. 31. Guests can enjoy one of the final presentations of the romping character cavalcade “Mickey’s Jingle Jungle Parade” at 3:45 p.m.

Everything at Disney’s Hollywood Studios sounds the best to me.. 😛

As always Mulch, Sweat, and Shears, the cover band that plays year ’round on the Streets of America at Walt Disney World’s Hollywood Studios is playing New Year’s Eve shows. These shows are very popular so arrive early.

Show times are 8:00pm, 9:00pm, 10:00pm, and 11:00pm with the fireworks show beginning as close to Midnight as possible. Yes – they are playing a show with the fireworks! It’s going to be awesome. There are a few new surprises this year including a bigger band and some new material.

Mulch has a big following including a large number of video on YouTube, a facebook fan page, and their own CD under the name Los Lawn Boys.
http://www.facebook.com/pages/Mulch-Sweat-Shears/36643253738
http://loslawnboys.com