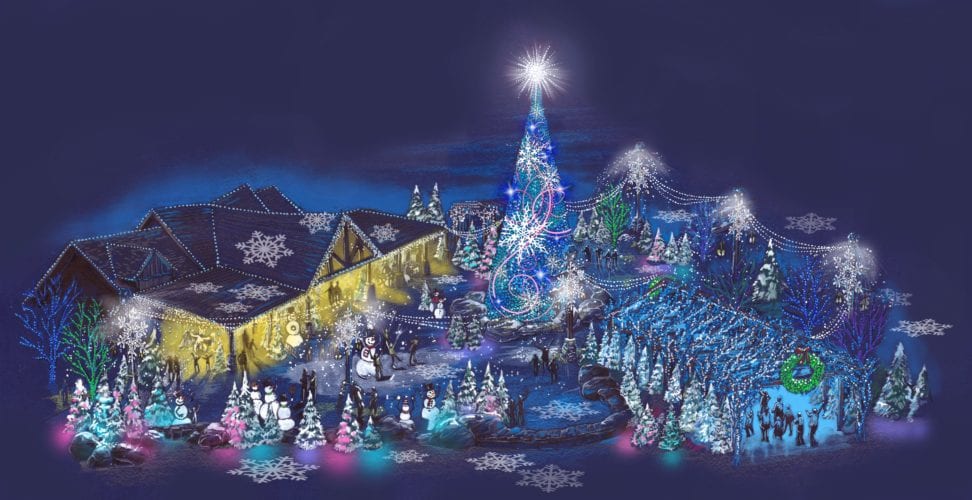 An artist’s rendering of 2018’s Smoky Mountain Christmas at Dollywood.

This past week, Dolly Parton announced a huge 2018 entertainment lineup for her Dollywood theme park in Pigeon Forge, Tenn.

Calling next year the “Season of Showstoppers,” Parton announced a lineup that represents an investment that is $1 million more than any season-long entertainment in the history of Dollywood.

“Music is the universal language that unites all of us,” said Parton. “It celebrates our people, our families and our communities. I’ve made music my life’s work because I feel each and every one of us has a special song to sing. I’ve made sure that here at my Dollywood, we use music to encourage and inspire those songs in each and every one of our shows.”

The second week hosts artists like Amy Grant, Larnelle Harris, David Phelps, The Blind Boys of Alabama and comedienne Chonda Pierce. The third week of the event will showcase classic performers like The Marshall Tucker Band, The Drifters, The Atlanta Rhythm Section, Firefall, Debby Boone and Al Stewart. Concert dates and show times will be announced at a later date, and this festival runs from April 11-29.

Dollywood’s Barbecue and Bluegrass is the next festival to take the stage, from May 25 through June 10. Guests can enjoy shows from Rhonda Vincent & The Rage, Dailey & Vincent, Doyle Lawson and Quicksilver and more.

Dollywood’s Rock the Smokies moves to a new Aug. 25 date with Crowder and TobyMac headlining, along with other contemporary Christian artists during this fun farewell to summer.

Dollywood’s Harvest Festival, running from Sept. 28 through Nov. 3, will offer even more fall festivities with the new Great Pumpkin LumiNights, and the largest Southern gospel event in the country.

During the festival, several hundred performances by Southern gospel artists will happen during the day. At night, thousands of pumpkins will light up the night with plenty of displays for the family to enjoy. Guests can also view the work of visiting craft makers from all over the U.S., or enjoy the harvest-themed food offerings from Dollywood’s foods team.

The 2018 season will round out with Dollywood’s holiday event, Smoky Mountain Christmas. Running from Nov. 10 through Jan. 5, 2019, this event will feature four million lights, holiday entertainment and stage shows, Rudolph the Red-Nosed Reindeer and his friends, and the fan-favorite “Parade of Many Colors.”

For more information on Dollywood’s 2018 lineup, visit dollywood.com. Check out our video of the holiday parade, “Parade of Many Colors,” below:

I would like to have your schedules for 2018 for plays and dinners.Plus ticket prices and possibly season tickets for 2 adults.

We would like the schedule of Southern gospel singers scheduled during October. Thanks.

I would like a schedule of your 2018 southern gospel line up as soon as you get it so we can plan our dates. We have already purchased our season passes. thank you Harold & Georgia Reed

Could you tell me when the schedule for Harvest Festival will be on line. I would love to plan my visit forthefLl.

Schedule of gospel groups in the park October 20_28 thank you

We are attending the southern gospel jubilee again this year & have been looking for the line up. Hope it is available soon.

We would like the line up for the gospel music month for 2018. When will it be online?