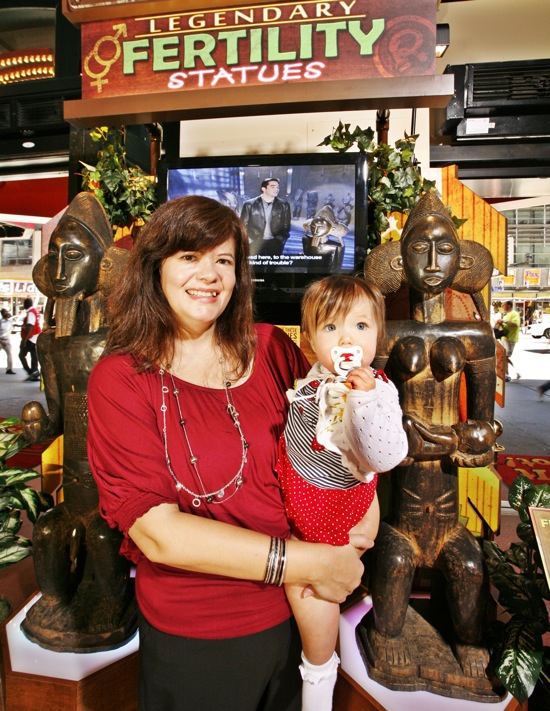 Aida Dortants of Orlando touched the statues and within a month was pregnant with her second daughter, Evan Lauren Dortants.

Ripley’s Believe It or Not! Odditorium in Orlando will host the fourth stop of a three year, multi-city international tour of the world famous Ripley’s Fertility Statues. They will premier in Orlando this Thursday, Jan. 8.

More than 2,000 women have reported they became pregnant shortly after touching the wooden statues. Many of them had been told by doctors they would never be able to conceive. Since the women’s stories became public in 1994, millions have visited the statues.

From Jan. 8 through Feb. 1, the statues will be on display in the lobby of Ripley’s Believe It or Not! Odditorium at 8201 International Drive. Would-be parents are invited to come in and touch them for free during regular business hours, 9:30 a.m. to 11 p.m.

The five-foot tall wooden statues were acquired from the Ivory Coast (Cote-dIvoire) of West Africa in 1993, and were placed in the lobby of Ripley Entertainments corporate headquarters in Orlando. Within months, 13 women, including staffers and office visitors were pregnant.

Following a December 1995 story in the Wall Street Journal chronicling the phenomenon, the demand to touch them became international news. In the ensuing years, the edifices made three trips around the world, stopping at Believe It or Not! museums.

They were retired to the Ripley warehouse in 2001, but due to great demand, they were put on display at the Ripley headquarters in Orlando where they have been seen by hundreds each month who made a special pilgrimage to see and touch the statues.

”For years now, we have been inundated with requests to make these statues available once again at our odditoriums throughout the world,” said Edward Meyer, VP archives and exhibits for Ripley Entertainment. ”Amazingly, people are still finding out about them and call us wanting an opportunity to come in and touch them. Due to this demand, we have decided to tour them again.”

After Orlando, the statues will spend a month at the Ripleys Believe It or Not! Odditorium in Myrtle Beach, S.C.

For more information on the Orlando Ripleys Believe It or Not! Odditorium, visit ripleysorlando.com

For those who don’t speak French, here’s a Google translation of what Traore asked:
“It’s been a long time I’ve had a baby, and I’d love to have two with my new husband? can you tell me how to come and touch the statues lucky?”

My answer, in English and French:

Traore, You can find the 2010 schedule for the statues here: http://www.ripleys.com/fertility-statues

My fiance and I toucged the statues today I’ve personally been struggling with infertility for 6 years. Let’s see what happens!

Did you get pregnant????

Do they work my questions

I just touched them really wonder if they work are not