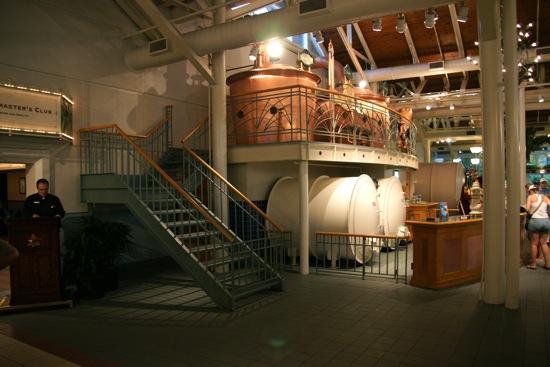 Busch Entertainment Corp., the amusement park subsidiary of Anheuser-Busch InBev, told employees Jan. 2 afternoon and Jan. 5 that free Budweiser beer will no longer be given to theme park patrons.

Visitors of legal age will be able to buy beer at the parks, which will convert their beer sampling hospitality centers into cafes and restaurants, said Fred Jacobs, a spokesman for Busch Entertainment.

“The hospitality centers had pretty limited appeal because it was for patrons who were of legal drinking age who wanted beer,” he said. “We were looking for something that had a broader age appeal.”

The couple dozen employees who worked in the hospitality centers will be moved to other jobs within the parks, Jacobs said.

hmm…Williamsburg isn’t affect that much seeing they only had brew masters clubs due to the Happy hour law Virginia has.

The line at Orlando for beer was almost always out the door at all times of the day. It’s obviously a political move – they’re closing the free beer centers because it costs them money. Inbev is well known for buying companies and trimming them down to their core business, here’s the first move.

But will the absence of free beer in the parks affect the number of visitors? Truly, how many families will not be visiting Sea World or BG parks simply because they can’t get a free beer? I would say very few visits will be affected.

Agee with Doug, we as a family always visited the hosp centre.kids had soda we had free beers as well as sandwiches it was fun time city.
If Fred Jacobs argument is to stand up then no alchohol would be sold at all.
What else will InBev decimate?
They need a radical PR facelift because they are known in Europe as the silent assassins of individual brewing.boring, deadly and guiltless and going by the press release they are the big bland spin merchants.

Will colaboy69 think Discovery Cove is a good deal when all the free drinks and food are taken away and replaced by an alfresco bar menu.
Your missing the point completely,we as a family visited the Hospitality centre with our kids because we could have a free beer as well as a snack.
Now we have to pay, we might as well eat somewhere else, it does not mean we will boycott the park.

This is bull, Inbev is bull, i always enjoy going to the hospitality center with my family and getting a nice cool FREE beer after 5 hours in the park with all the kids… IT WAS a nice relaxing place to chill out…. but not anymore…

I think it is very petty and so so sad! We live in the UK and love the American hospitality – the free beer was a real bonus when visiting Sea World. All it will do is cause a lot of bad feeling. We used to visit 3 or 4 times per trip, but not anymore. I think the new owners will have to think again – in this credit crunch era, free beer could be a real winner for them.