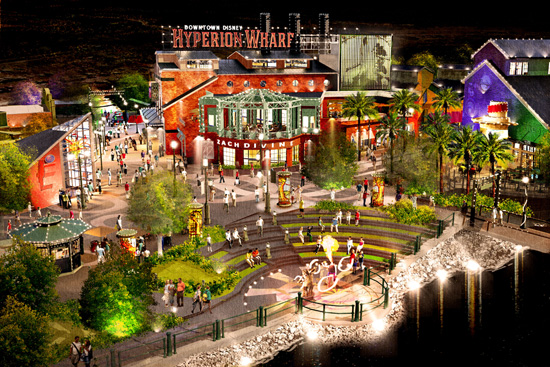 Today the Disney Parks Blog announced details on their plans for the mostly shuttered Pleasure Island area. The 120-acre area will be rethemed as a restaurant district called “Hyperion Wharf.”

Disney describes it as a nostalgic yet modern take on an early 20th century port city and amusement pier. Nighttime will be when the area really shines as thousands of lights will give the area its namesake. Hyperion is the Greek god of light and one of Disney’s first studios was in California on Hyperion Avenue. 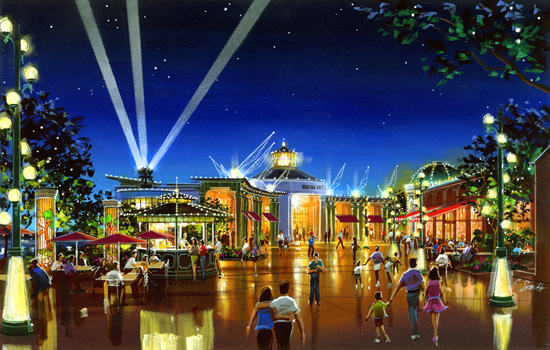 A lakeside park will also be added near the current boat dock in Pleasure Island. As seen the concept art below, the park will be similar to the one at Universal CityWalk now, with the grass stairsteps. Also expect many restaurants and shops to be added. 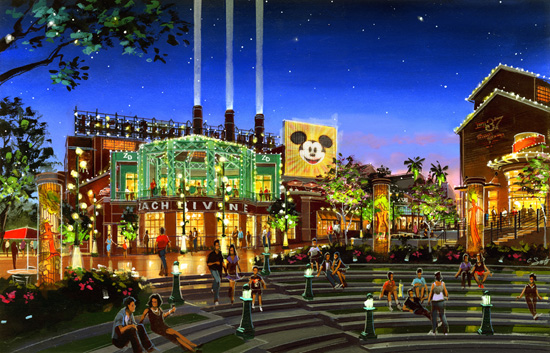 Construction is set to begin immediately and is scheduled to be completed in early 2013.

Disney also announced some other changes to Downtown Disney:

The Lego Imagination Center is planning to remodel from January to April 2011. Once completed, the store will expand by nearly 3,500 square feet and new Lego exterior models featuring scenes from classic Disney movies will be added. The store will operate out of a temporary location at Downtown Disney during construction.

The AMC Theatres are adding new digital technology, a Concession Stand of the Future and Florida’s first Fork & Screen Theater.

UPDATE:
• More than 1,500 new restaurant seats will expand dining options by more than 25 percent.
• The new design makes the waterfront the focal point.
• In the next 30 days, AMC Theater guests will be able to purchase unique, upscale snacks and drinks from interactive, self-service food stations similar to a food court.
• The AMC Fork & Screen Theater will offer restaurant-style dining with seat-side service beginning in spring 2011.
• The projects are expected to create an estimated 600 construction jobs, 500 restaurant, retail and entertainment jobs, and support 100 vendor and supplier jobs. 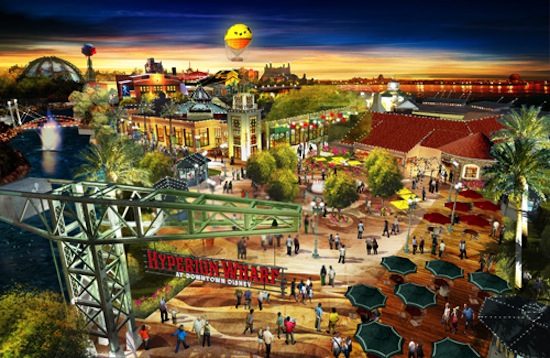 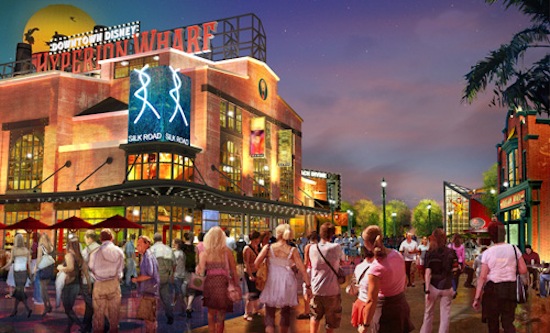 so…
more shopping, more restaurants, but the only entertainment is going to be the outdoor dance party, the didgeridoo player and a few chairs under umbrellas?
Yeah… I think City Walk and Orange Ave. can continue to expect to get all the crowds and all the money.

This seems kinda redundant with the Boardwalk that’s already similar in theme. It still looks nice, but it’s too bad they didn’t try something different than what’s already present at the resort.

I’m still bitter that I never got to attend the Adventurer’s Club. But I’m sure this will be really nice. I know I’ll visit.

the adventurer’s club was very fun… shame that’s been shut down for a while now. they should re-include it!

I agree bring back the Adventurer’s Club! All this is another dining option, the adults need something to do at night also.

I like Pleasure Island in its hey day before Disney starting cutting it off. They used to have dance shows and a New Year Eve Celebration with fireworks every night! Bring back the good old days!

Hyperion Wharf!!?? LOL So what! Restaurants and more restaurants, mostly outsourced to major restaurant chains is what’s happening! Yes, we need more entertainment for adults who may want to take a break here from the parks! Itoo mourn the loss of Adventurer’s club, and the Comedy Club.

Looks very nice, but it’s not the Adventurers Club is it!!!

Matt, love your article and pictures, I think adults will love to be there when it opens. Even an older Senior like me. No matter the age, we all are children at heart!!

Well Adventurers, Hyperion Wharf has been announced and the general consensus is “Where’s the Adventurers Club”! In fact, the most interesting thing is on the official Disney Parks Blog, more than 85 percent of the first 194 comments about Hyperion Wharf mention the Adventurers Club by name, either lamenting its loss, demanding its return or wondering where it fits into the new plans. So Adventurers, we are not alone in wanting Adventure returned to Downtown Disney, and here is our new outlet to let Disney know it! Please flood this Blog’s comment board on what we, the public, truely want, our Adventurers Club’s immediate return!

PI (pleasure island) city walk, downtown, church street all easy to say but Hyperion Wharf, really? That’s the best idea that the marketing team came up with? Now that was a great sales pitch, that guy (or gal) should get a raise, you know they said, let’s make this the most difficult and convoluted thing to say and see if it works. They are only secondly clever to the marketing genius who created Mickey’s fake teddy bear, come on man.

Adventures Club! The new plans are not a unique idea to take us through the decade into the 20s…the lights are a nice feature, but C’mon man!

Apparently, nobody cares what the guests want. The locals support this place too! CityWalk gets our money 80% of the time…I will try the theater and dining experience.

I like the looks of this. I hope that The Adventurer’s Club will be incorporated into it.

Come on! Disney is suppose to be a leader not a follower. They need to do something different from what has been done. A sitting area!? More stores!! How much of the same overpriced stuff can you buy? More restaurants!!! More overpriced so-so food. Put something there to amuse us. The balloon was a good start, now build on that. Maybe a new type of Adventurer’s Club or something along those line could be built. Stop boring us Disney and start exciting us again!!!

It all looks good and well what they’re changing PI into, but I still think that Disney Imagineers are still not getting the point. Adults only want to do one thing at night, and thats PARTY!! Shopping and dining is something people do during the DAYTIME! But at night we all just want to go somewhere wher we can get away from the kids, drink something other that soda and mingle with other adults. And I should know cause I live in New York. They better put some after hour spots in this new park or business in places like citywalk are going to skyrocket.

I’m ALL for something new to go in at PI but also would love to keep some of the old. Why gid rid of something that worked “Adventures Club” it was different, fun. People LOVED it. Build on it don’t take it away. Imagine how much money they would make if they re opened it. That whole month heck year would pack em in. I hope it isn’t just more boring shops and soso restaurants. At least bring in some GOOD food.

I miss PI! I don’t know why they had to close it all? Update it maybe but not close. I had been to WDW 8+ years in a row and every night I visited the island it was always rammed! How can that be a bad thing?
The first error they made was trying to make it family friendly and use the island as a cut through from market place to downtown. It should of remained adults only! Like many here have said – adults want somewhere to let their hair down. Im a huge Disney fan and last year had to go to City Walk – as nice as it is it’s just not Disney. Come on imagineers for years you have amazed and dazzled us, making our wildest dreams come true! Its time to recapture the magic and bring back the spirit of Disney!!

i’m sure it will look and feel amazing. however if you want me to buy more stuff, and give me more reasons to stay (hotel $$$), don’t give me simply a disney scale version of a mall experence i can get at home. i remember PI in it’s glory days, and after visiting DT disney in 09, i felt i wasted my time for the most part. i know there is a shortage of dining plan sit down resturants, but this is silly. what good are those resturants outside the parks like holloywood studios where they are needed most.

while we’re on the subject of downtown disney, maybe you can take a look at updating disney quest. disney recently shuttered a whole game studio (the ones who made the recent TRON evolution games.) how about we do some re-hiring and let those minds loose on using existing hardware to upgrade that box at relatively low cost. that needs to be more of an arcade with larger than life units, it needs updating. a lot of the games there feel sub playstation 2 in a day and age when we are about the have plastation 3 level gaming in our handhelds.
i have 1001 ideas you can use to keep that place relavent while lowing your development costs.

Bring back the Adventure Club

We have so many WONDERFUL memories and laughs from the Adventures Club. We miss it so much and have not been back to PI since it closed. We visit a few times a year (WDW) and wish they would bring it back—PLEASE. We need a reason to go back downtown besides shopping.

The comedy club was the best that I have ever attended! I will not be going for more restaurants and stores, Disney has plenty of both without making the treck to Downtown Disney! They need to keep 2 or 3 dance clubs for adults.

Downtown Aquarium Restaurant like in Denver, Colorado. Themed restaurant with the animal exibits, sharks, swimming tigers and stingray bay. Make the Aquarium Bar on opposite side large enough to add dance club for adults only. Family oriented on one side and adult oriented on other. Something unique for everyone. Just a thought, since no admission charge to enter Downtown Disney.

Glad to see the adults only clubs gone for more family friendly entertainment. We don’t come to Disney and spend good money to be threatened by drunks and exposed to vulgar behavior. Glad to see it go!!! Want to drink and act like a punk go into Orlando with the rest of the thugs.