Dreamfinder and Figment make surprise appearance at the 2013 D23 Expo 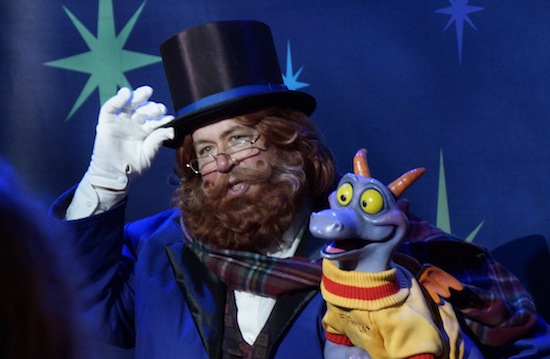 As part of Disney’s D23 Expo 2013, The Dreamfinder, a beloved former character at Epcot, and his pet dragon Figment, came out to honor Disney Legend Tony Baxter and meet fans.

During the Disney Legends ceremony, Tony Baxter was greeted onstage by the pair that he helped create for Epcot back in the 1980s. He was also join by Darth Vader in reference to Tony’s work on Star Tours:

Afterwards, Dreamfinder and Figment made a special appearance at the Disney Parks & Resorts Pavilion on the Expo show floor, meeting guests and taking pictures:

This was a one-time appearance but during the Legends ceremony, Disney CEO Bob Iger made a comment about how much the fans love Figment, saying, “… he isn’t going anywhere anytime soon.”

Visit our YouTube for more videos from the 2013 D23 Expo, and watch for our coverage on the August 15 episode of The Show.

Movie Review: ‘Planes’ is worth seeing, but not quite on par with ‘Cars’

Howl-O-Scream 2013 to be taken over by 13 evils – Can you survive The Experiment?

Do you have a spam problem on this site; I also
am a blogger, and I was wanting to know your situation; many of us have developed some nice procedures
and we are looking to exchange solutions with other folks, why not shoot me an e-mail if interested.

10 magical holiday gift ideas for any...