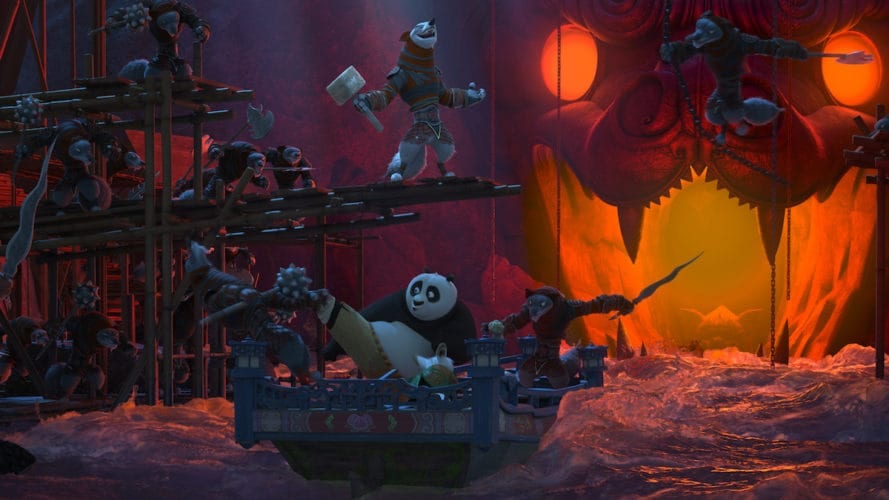 This brand new attraction will replace “Shrek 4-D”, which originally opened in Hollywood in 2003 and is still showing at Universal Studios Florida. But don’t be fooled, the DreamWorks Theatre and new “Kung Fu Panda” show are not a simple overlay to the original “Shrek” attraction. The entire building has been gutted and redone from the inside out, creating a never-before-seen experience. Attractions Magazine had the opportunity to tour the new theater and here’s what we learned about the upcoming attraction.

First, it’s important to note that while the DreamWorks Theatre will open with a Kung Fu Panda show, the building itself is the official home of all DreamWorks Animation characters at the park. This is why one of the first characters you’ll see at the Theatre is Pinocchio (from Shrek) snoozing inside a ticket booth at the main entrance. He is one of many characters from various DreamWorks films that guests will see before the main show.

The building and queue area are almost unrecognizable. The exterior has been redone to resemble the actual DreamWorks campus in Glendale, Calif. Gone are the stone castle walls from Shrek 4-D – everything is brand new and in the old-Hollywood, art deco style. Certain buildings are even labeled like a classic Hollywood backlot. Before entering the main theatre, guests will walk past a series of posters for classic DreamWorks films like “Madagascar”, “Trolls”, and “Prince of Egypt”. We couldn’t think of a DreamWorks animated film that was not represented in the queue!

https://twitter.com/SoCal360/status/1001599437918035968
There’s a brand new pre-show for “The Emperor’s Quest” in which DreamWorks characters from different movies will interact with each other for the first time. The Magic Mirror from Shrek is back and better than ever, flanked by real awards that DreamWorks has won for their films. Once inside the theater, everything becomes about “Kung Fu Panda”. Although we didn’t get to see the new show during our visit, we were told it revolves around Po retrieving a stolen hammer from Kang and engaging in an epic kung fu battle that will surround the audience with 180 degree projection mappings. Unlike Shrek 4-D, this show is not in 3D. The show will literally take place all around guests, and ride engineers didn’t want to limit the audiences peripheral vision. However, the show is still multi-sensory. The seats move with the visuals, images fly overhead, and sound, wind, and water effects will be a huge part of the experience. Jon Corfino, senior director and executive producer of the attraction, let us know the best seat in the house is towards the back, where guests can take in the full scope of the 180 degree visuals.
https://twitter.com/SoCal360/status/1001605740329558019 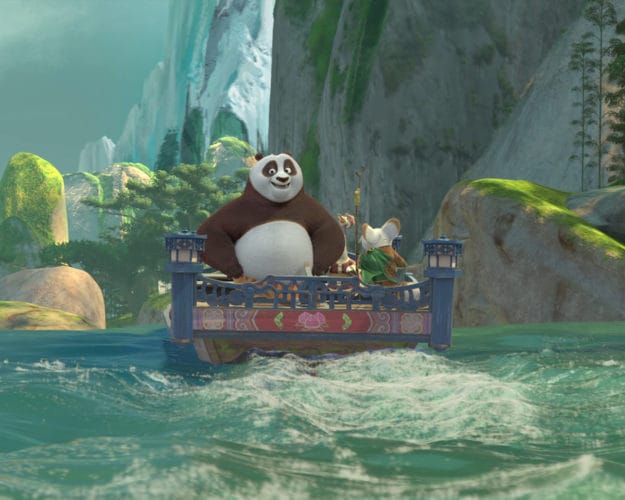 The entire experience, from the pre-show through the main event, will be about 10 minutes. Universal Studios does not currently have any plans to overlay the theatre with new shows, but the potential is definitely there. The projection mapping technology is so versatile, it would be easy to implement a new show inside the theater at any time. We anticipate “Kung Fu Panda” staying for awhile, but Universal does plan for the theatre to be available to any DreamWorks franchise in the future. Universal worked very closely with DreamWorks animation to create an authentic “Kung Fu Panda” experience that will be enjoyable for fans of the films and visitors who have never seen the movies. We believe this experience will surprise guests who are expecting something similar to Shrek 4-D, and is a promising showcase of brand new immersive technology. If we are this impressed by just the theatre, we can’t imagine how wonderful the actual show will be.

The DreamWorks Theatre featuring “Kung Fu Panda: The Emperor’s Quest” is now under a soft opening, but it officially opens June 15 at Universal Studios Hollywood.