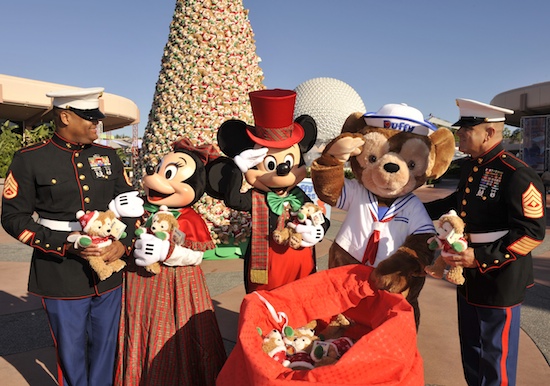 Disney has taken Duffy the Disney Bear to new heights at Epcot – literalry. But it’s all for a good cause. Guests at the park can check out the 20-foot-tall Christmas tree made from 1,200 stuffed Duffy bears. The tree starts Disney cast members’ annual collection for Toys for Tots.

Each year, Walt Disney World VoluntEARS donate thousands of hours of service and tens of thousands of toys to Toys for Tots – all with the goal of making the holidays brighter for deserving children throughout Central Florida. For the next few weeks, cast members will play the role of Santa’s helpers by collecting new toys for the annual toy drive, which will be added to the 1,200 Duffy bears.

“As the story goes, Minnie created Duffy as a pal for Mickey to bring him comfort and joy, and we hope that Duffy brings those same gifts to children throughout Central Florida during the holidays,” said Shoemaker.

“Disney cast members have big hearts and time and again show their generous spirit,” said First Sgt. Michael Diaz, who heads up the 2010 Central Florida Toys for Tots campaign. “As we head into the holiday season, we are seeing a record level of people in need and these donations will make a big difference in the lives of thousands of kids.”

Donations from cast members will continue to be accepted through Dec. 10, with a final tally on toys expected thereafter. This year, Central Florida Toys for Tots expects to assist thousands of families from Orange, Osceola and Seminole counties. Nationwide, Toys for Tots has drop-off sites set up to accept toy donations. For locations, visit https://toysfortots.org.

Disney’s involvement with Toys for Tots began more than 60 years ago when Walt Disney and his animators designed the original Toys for Tots logo that is still used today. In 2009, Disney VoluntEARS collected more than 23,000 toys for Central Florida Toys for Tots and gave more than 3,000 hours toward helping the U.S. Marines register families in need, sort and stock toys and assist with toy distribution.

Here’s a video showing how the tree was made: