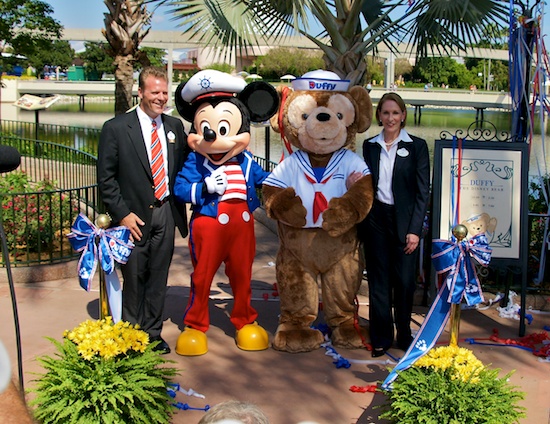 Duffy the Disney Bear made his debut at Walt Disney World today. You can meet Duffy, buy a Duffy and color a Duffy at his new home, Epcot. But what’s Duffy’s story? Read on. 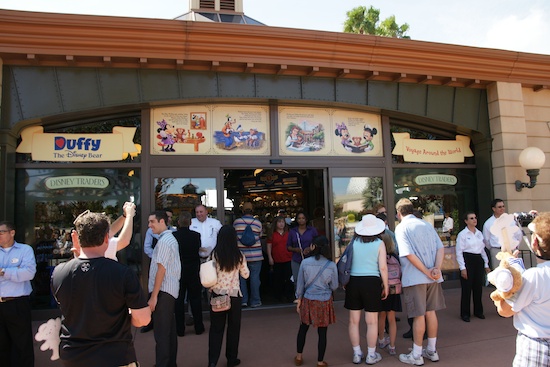 As you walk through Epcot, you’ll first see Duffy near the left of World Showcase Plaza. The store here carries a lot of Duffy merchandise. You can read Duffy’s story above the entryway. Here’s the official story from Duffy’s Facebook page.

“One day, Mickey Mouse was getting ready to set sail on a long sea voyage. Minnie Mouse made him a special teddy bear to take with him so he would never be lonely. Minnie presented her hand sown bear to Mickey in a duffel bag. Mickey loved the bear and named him Duffy.
“As Mickey and Duffy sailed on their journey, they visited all sorts of exciting places and make new friends along the way. At the end of their travels, they sailed back home for a wonderful reunion with Minnie.
“Mickey and Duffy shared their magical memories and photos with Minnie, who was thrilled that Duffy was such a great friend and companion for Mickey.” 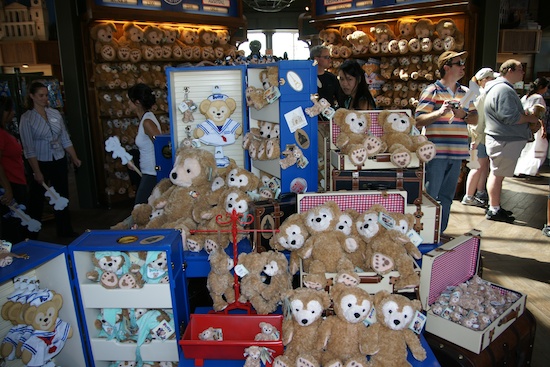 The front side of the store is filled with different size Duffys and his accessories. 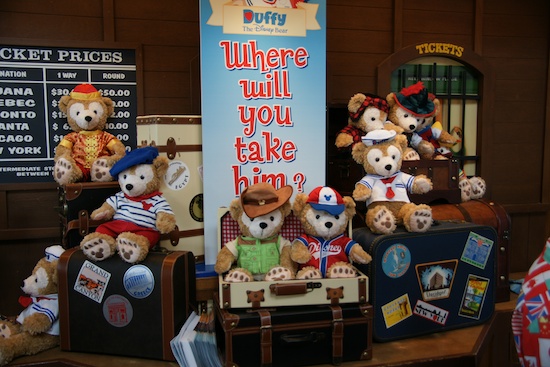 This display shows some of the outfits for sale in the different country pavilions at Epcot. 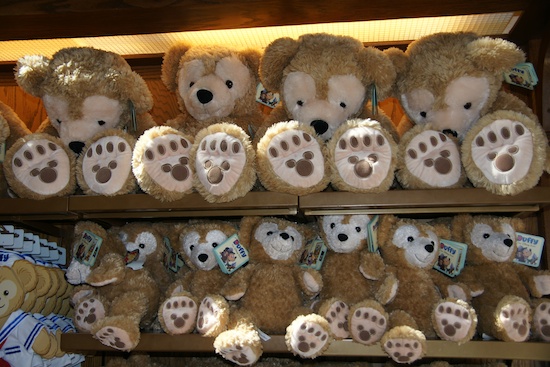 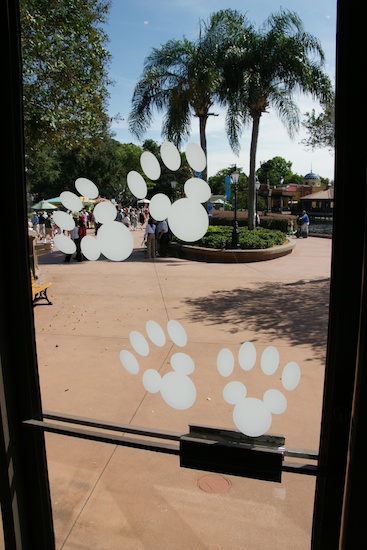 Some Duffy paw prints on the wndow of the store. Notice the Mickey shape in them. The outline of Duffy’s face is also in the shape of Mickey. He also has a Mickey shape on his body. 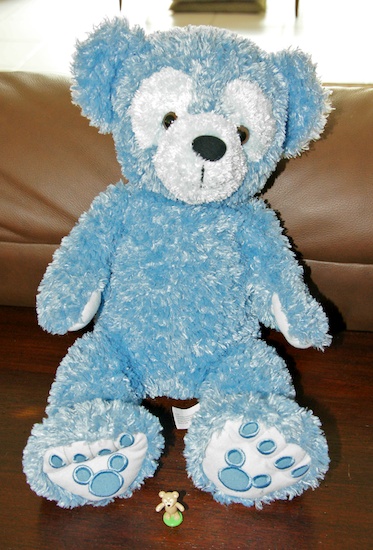 You may have a Duffy doll in your house and not even know it. Disney sold Duffy around the parks years ago, but he didn’t have a name. Back then he was known simply as The Disney Bear and was available in different colors.

When he made his appearance at Tokyo DisneySea in 2004, they named him Duffy and he became wildly popular. Now the bear is back in the U.S. and he’s keeping the Duffy name. 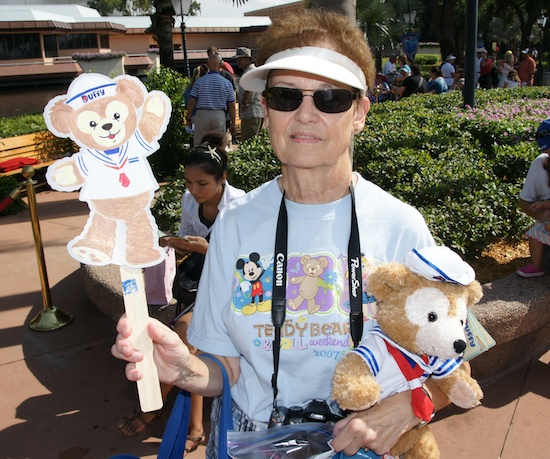 In addition to the dolls and accessories available around Disney World, the Kidcot Masks children used to color in the country pavilions at Epcot have been replaced by Duffys on a stick you can color and get stamped. Pictured above is Duffy fan Marge Hudec. She said she owns a bunch of Disney Bears and was excited to meet Duffy in person and get photos of him. 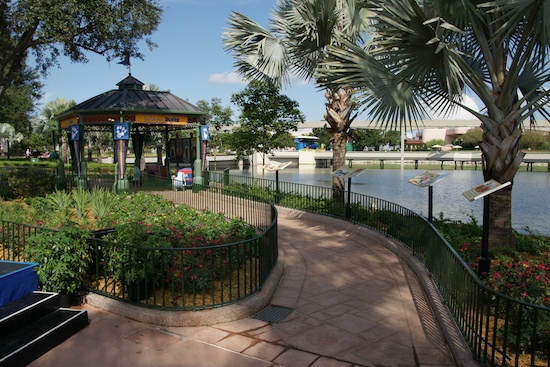 Right across from the store is the newly constructed area where guests are able to meet Duffy. 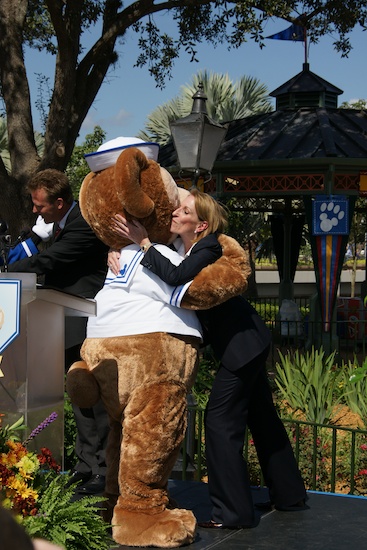 He may not be as fluffy as Lotso from Toy Story 3, but he’s more huggable because he’s nicer. 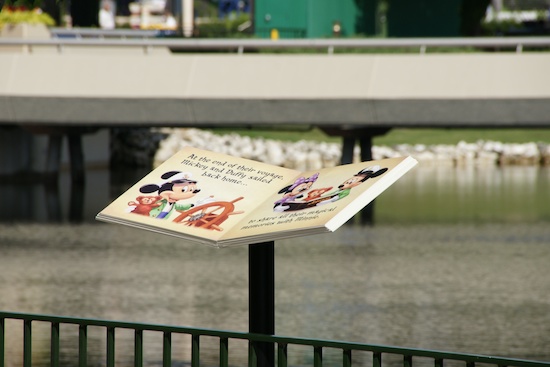 Located along the queue, these “books” tell Duffy’s story as guests are waiting to meet him. 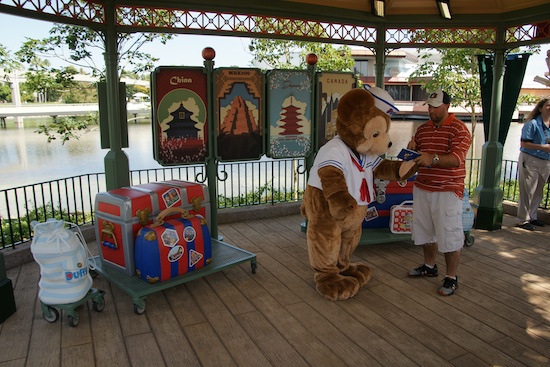 Duffy has his suitcases ready to go as he signs an autograph for a new fan.

Here’s a video of Duffy’s arrival and ribbon cutting:

can you meet duffy and mickey together like that? i’d love to meet sailor mickey.