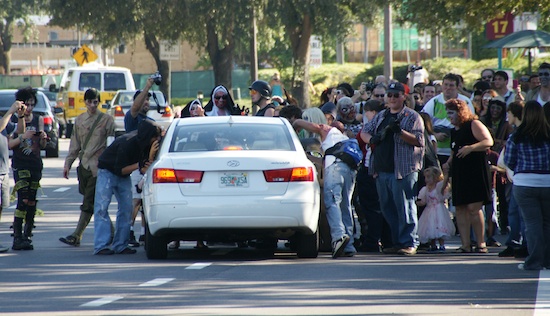 It started last Friday afternoon with the undead lumbering from Uno Chicago Grill on International Drive, down the street to the Wyndham Orlando Resort. The Zombie Walk, put on by The Deadite Empire, was the kick-off to Spooky Empire’s Ultimate Horror Weekend.

This year’s event was larger than ever. Fans came from all over to meet some of the stars from their favorite horror films. Many came all dressed up, either for the Zombie Walk, the costume contest, or just for fun. In addition to the celebrities, horror movies were shown, parties were held and there was a large vendor room selling collectibles, artwork, clothing and more. Because they seem to go hand-in-hand, there was also a large room full of tattoo artists.

Here’s a look at this year’s Zombie Walk. The event started about an hour late again this year. I guess most zombies are slow and can’t tell time.

Here’s a look at the overall convention floor, including celebrities, collectibles, costumes fans waiting for the costume contest and more: