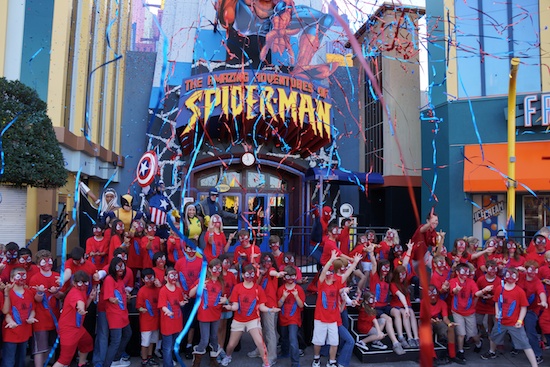 The Amazing Adventures of Spider-Man ride at Universal’s Islands of Adventure reopened today with new HD projectors and many other enhancements. The day started off bad as Dr. Doom and Green Goblin started harassing reporters and kids, but they were quickly chased away by Spider-Man and some of his superhero friends.

Here’s a look at the reopening ceremony:

Although the storyline for the ride remains the same, Universal has added a new HD 3D projection system, newly rendered HD footage for the entire show, upgraded 3D glasses and a new musical soundtrack and more.

As you enter the Daily Bugle, you won’t notice a lot of changes. Some spider webbing has been added outside and a few places inside, and the props in the queue have been touched up without a lot of changes. The first big change you’ll notice is the new high-tech 3D glasses. If you’ve been on the new Star Tours ride at Disney’s Hollywood Studios, you’ll recognize these. They’re very similar if not the same.

When the ride begins, you’ll hear a new musical soundtrack has been added. It and the sound in general sound great. But its when you first see Spider-Man that you really notice a difference. 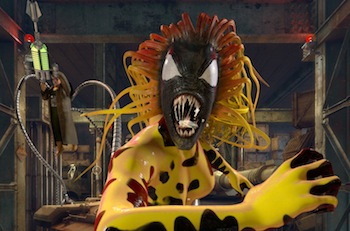 While the animation has been re-output in HD, they didn’t simply output the same film you’re used to. The characters have some new looks, and the details are amazing. You can see threads on Spider-Man’s suit. You can see rats scurrying in the background. But the animators have added a few new things too. You’ll likely notice things you hadn’t before, whether it’s because the screen is so sharp, or because they simply weren’t there before. In the scene that has your scoop vehicle bumping knocking Hobgobilin off the top of a building and you can see him falling all the way down in the background, bouncing off buildings. In fact Universal says hundreds of new details and effects have been added.

(UPDATE: After riding again, there are a couple of changes I don’t care for. The falling scene has been made a bit shorter, and when Hobgoblin throws a pumpkin through the wall, he throws a curveball instead of straight through the wall.) 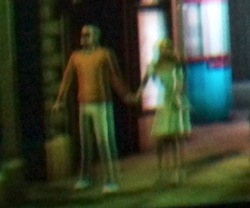 Don’t forget to keep an eye out for Spider-Man co-creator Stan Lee. Eagle-eyed riders will notice him a couple of times or more. If you notice any cool tributes or hidden things in the ride, be sure to post them below. Here’s a photo of Stan Lee during the ride, although I’m not going to tell you where to find him. Please ignore the blurriness of the photo. It was taken without the aid of the 3D glasses and at high speed.

We noticed as the driver of the garbage truck, the narrator, and at the very end.

I saw him as the garbage truck driver and standing on the sidewalk after the “free fall.”