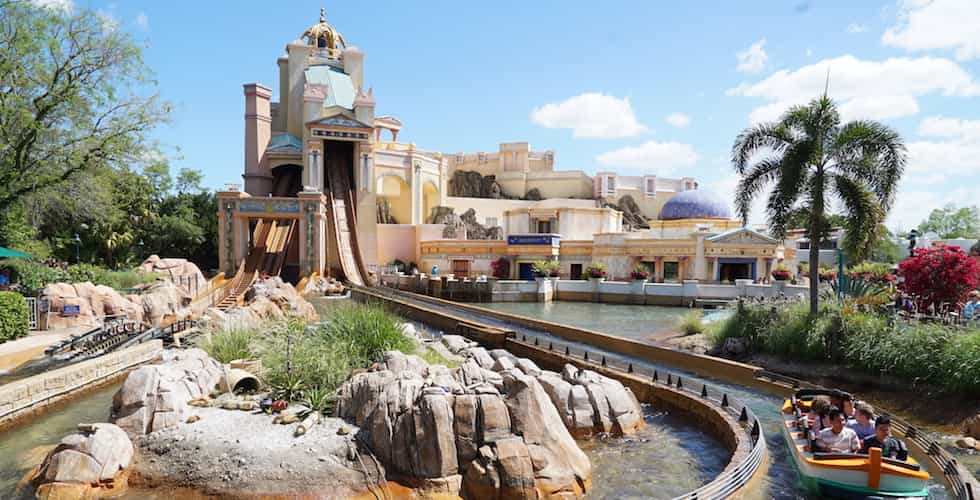 The Journey to Atlantis ride at SeaWorld Orlando has been toned down to be less scary. Photo by Matt Roseboom/AttractionsMagazine

The Journey to Atlantis ride ride at SeaWorld Orlando recently reopened after refurbishment as a more family-friendly ride.

The ride still takes you through the lost city of Atlantis, but the story of the mermaids pretending to be nice then turning evil and the effects that go with it have ended. Now instead of the mermaids welcoming you and telling you not to be afraid before their evil metamorphosis, riders just hear some new pleasant music (from the old Allure show). Some of the mermaids are still there, but with their effects turn off, they no longer look evil. The large Madusa head is also still above you before you go up the first lift hill, but her eyes no longer glow a “scary” green and there’s no lightning effect.

The next change you may notice is that the “Beetlejuice” music has been removed as well. (It was always a mystery why one of the theme songs from “Beetlejuice” was in the ride.) After the big drop, as you round the bend, the mermaids no longer say “Leaving so soon? I think not!” The evil mermaid voices just before the roller coaster portion of the ride have also been removed.

No changes were made to the ride track itself, so although it’s still a somewhat scary ride with a big drop and roller coaster thrills, it’s not the kind of scary that may give your kids (or you) nightmares.

We reached out to SeaWorld for a comment but hadn’t heard back. We will update the story if/when we hear from them.

Here’s a full video of the newly updated ride:

So there was no refurbishment? Just taking away ride elements? I don’t know anybody, adult or kid, that said this ride was nightmare inducing before…wow, great journalism…. SMH

So sad that they removed the mermaids. That element was my favorite part about it. They at least gave you story and interest instead of just sitting in a boat listening to the opera music :/ Well, that was disappointing….

That’s Good News ! I’ve worked at that Attraction, actually, and I agree with the report about it – who needs evil, deceiving creatures ?

That ride was the best ride there beside Mako! It was like a Disney ride. It actually had a story to it. Now they ruined it.

They have really spoilt what was my favourite ride… and as to the ‘scary’ aspect.. c’mon not everything needs sugar coated, think how emotional all the early Disney movies were… children need to learn how to deal with all aspects of life.

Excuse me, I understand what you’re saying but speaking as someone who got PTSD from this ride before I was even 10 years old you guys need to be more understanding. Aside from the huge drop there was absolutely nothing to let riders know this ride was NOT for kids and not family friendly at all.

This can’t be the real story. It can’t be. We’d go to Sea World for months and every time we went on this ride, it was broken. The “mermaid” did not work. The audio before this drop was not working. For months it was like this. There must have been a deep technical issue they could not for the life of them fix and that’s why they’re doing away with it.

The beetle juice music? The best part! Really disappointment in these changes. That’s history they’re taking away. And tradition.

I had went there 3 weeks ago and it was how it normally went I loved it!! But I go to ride it yesterday and the story is gone they totally ruined the ride that was one of the best rides there

I would venture to guess, with Kraken VR opening this summer, the rumors floating around are that Kraken VR could tie in to Atlantis, and the new effects/media are waiting for Kraken’s VR experience to go live

Just went on the ride and I have to say… Sadness… Me and my sister loved the story of the “mermaids” (come on people we all know they were sirens), and we felt the magic. But this… It was the equivalent of riding E.T. without sound. To be honest it was like the ride was broken. Don’t ride it, if you remember the good old days when the ride was something to look forward to.

I was so sad when I went back on the ride on 5+ years ago I was expecting every part of the audio to be there but I was so disappointed when I just heard opera music and not the sirens voice, the glowing eyes, but I never remembered the turn whole you start the rollercoaster part of the ride.

Say what you will. I prefer the ride this way. I rode it when I was a child and had nightmares for years. If people liked it the way it was that’s great but I’m not one of them. Ps before you judge, don’t bother because I don’t care what a bunch of strangers think. Also I wasn’t even 10 yet.

@ Danielle
I rode the original version when I was about seven and the story of the sirens freaked me the hell out. BUT the second I was off the ride I said “ That was AWESOME!” I was incredibly excited and wanted to ride the coaster again. I’ve recently been back to Sea-world and went back on it, but it wasn’t as good. I assumed that I was just too old, but now I realize it’s missing something vital to it’s wonder. It’s saddening that the true ride won’t be experienced again.

I’ve got to say I’m actually so happy with this I went on this ride when I was 5 and now I can’t go on big rides because that and the Medusa head with green eyes that pops out scarred me! :((