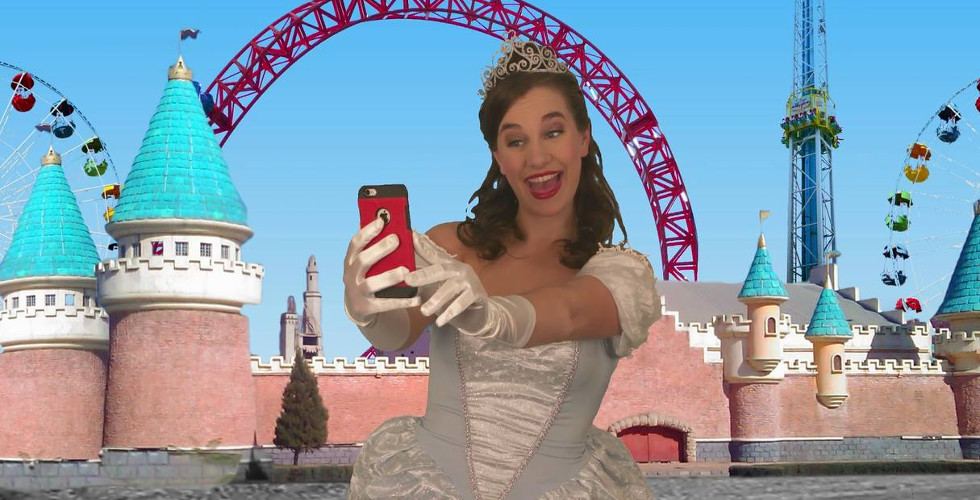 Attractions aficionados with an appreciation for the absurd are probably already familiar with Fake Theme Park, a satirical Twitter feed and Facebook page that pokes fun at our favorite form of amusement. Back in 2013, we interviewed Murph Gantly, the politically incorrect “CEO” of Fake Theme Park; today, we’re bringing you this exclusive interview with Princess Peppercorn, star of the recently released Fake Theme Park music video, “I’m a Theme Park Princess”:

Hi Princess Peppercorn, thanks for taking time out of your busy schedule to speak with me!

Hello, Seth! I’m delighted to be contractually obligated to answer your questions, especially the ones based on THE AGREED-UPON TOPICS WITH NO VARIATIONS OR SURPRISES. Let’s do this!

Everyone knows the original Fake Theme Park roster of royalty (Princess Rainbow, Princess Cupcake, Princess Marigold, etc.) but you are a relatively recent addition to the lineup. How did you become a Fake Theme Park Princess, and how have the other princesses adjusted to your arrival?

I had just been laid off from a certain unnamed beer-and-wings restaurant after breaking the wrist of a customer who touched my hair. That scene is recreated in the video, by the way. It took four days to shoot because I kept breaking the actors’ wrists. I ended up putting 22 guys on disability leave.

Anyway, I saw an ad for auditions, so I showed up. I did a monologue. Then a brief improv scene. Then I was typed out. Then I sneaked back in. I did the dance audition, sang both parts of “I Know Him So Well” from Chess, cried on cue, made a little kid smile, made a little kid cry, took sample photographs, juggled, did my entire routine from the 2011 Cheerleading Finals, tried on the costume, and did a full movement rehearsal. Then I did all that again for six callbacks before I made it to the last round. Then all I had to do was defeat one of the current Princesses in single combat! Better luck next time, Princess Periwinkle!

I’ve read your guidelines for taking pictures with park guests. Which is your least favorite social media platform that people use to post photos of you, and have you settled the lawsuit from that ‘selfie stick impalement’ incident yet?

I still haven’t figured out why anyone posts my photo on LinkedIn. It won’t help you get that B2B client services job! Also: Instagram. I don’t like the filters. It implies I don’t look perfect.
As for the lawsuit, I’d like to read a prepared statement: “I’m shocked and saddened by the excessive force that was used, by me, in the incidents of May 21, June 6, June 14, and July 20. While such action is never justified, I believe in all these cases it was justified. Thank you for supporting me as I support you during your support.”

At Epcot, Anna & Elsa from Frozen recently took over the Norway pavilion. What noble culture did Fake Theme Park desecrate to build your meet and greet location?

You’re probably aware that pepper comes from Vietnam, Indonesia, Brazil, China, and India. So now all five of those pavilions have been combined into one giant building devoted to me. Management asked if I wanted to keep the native Cast Members whose homelands were represented in the original attractions, but I felt we needed a fresh start.
Princess Peppercorn’s Perfect Play Pavilion Presented Per Pepsi includes a restaurant, gift shop, virtual reality experience, 3-D ride, water slide, and penny press machine. Every once in a while I show up.

Beyond meeting your royal subjects, what are your favorite duties as a Fake Theme Park Princess? I understand you star in a number of live stage productions.

You’re right about those productions — I appear in every other Princess’s stage show, even if I’m not supposed to.
My own stage show is Princess Peppercorn Live! though half the time we just play a taped version on screen. It’s a classic tale in which Princess Peppercorn has to defeat the Robot Shark and collect the Magic Vacuum Cleaners before the Pirate Witch arrives with her Space Zombies to conquer the Kingdom of Centaurs. Your magazine called it “completely unintelligible.”
I have to say the best parts of my day are probably my union lunch, union breaks, union rests, union prep time, union recovery time, and union walk time.

Your new music video “I’m a Theme Park Princess” was recently released on YouTube. What was the inspiration behind the song, and how do you have time to be an international musical sensation with busy schedule at Fake Theme Park?

The park’s founder and CEO, Murph Gantly, co-wrote a song with a misunderstood genius named Brandon Sturiale. Instead of the usual fairytale fantasy, his song would “tell it like it is” and “lay it on the line” and “increase princess auditions by 35%.” Why did he pick me? Princess Marigold can’t sing (it’s true!). Princess Cupcake has stage fright. Princess Snowflake only performs goth metal. And Princess Rainbow asked for too much money; Murph’s budget for the singer was slightly below zero dollars. So I got the nod.

Being an international musical sensation is tough! Skiing with Kanye, snorkeling with Gaga, darts with Dave Matthews. I’m out of the park so often. But my understudy Larry does a great job.

In your video, it appears that your lips don’t always match the soundtrack. Is there any truth to the rumor that you don’t do your own singing, but actually being dubbed by Adele Dazeem?

After reading your question, I called the video’s cinematographer and the editor. They will no longer be pursuing a career in the entertainment industry.

Any parting words for your fans and/or haters?

When you encounter me in the park, don’t hold my hand. Don’t touch my crown. Don’t step on my dress. Don’t grab my wand. Don’t hug me. Don’t maintain eye contact. Don’t ask if I remember you. Don’t pose for a photo on my left side. Don’t talk about my movies. Otherwise, just be yourself and have fun!

Win a trip to the grand opening...