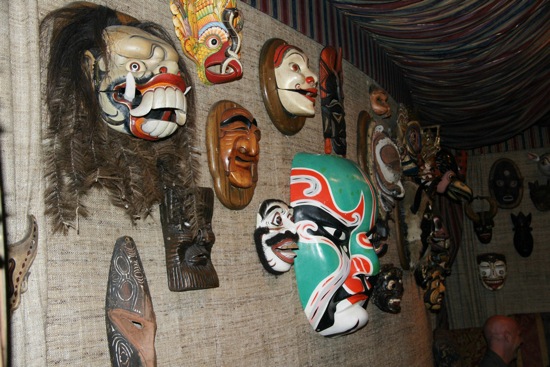 Our current issue features a story by Deborah Brauser on the Adventures Club and its closing. The article features interviews with some of the cast and fans. But we didn’t have room for all of the photos and information in the print edition, so here are the leftovers.

For all of our unpublished photos visit our Photo Gallery. Also be sure to check out our pictures from the last day at the club.

Casting Call – A list of the Club’s crazy characters

Pamelia Perkins: The club president, decked out in bright peacock-like colors, is always trying to keep things from going haywire at the club.
Otis T. Wren: The white suited club treasurer.
Fletcher Hodges: The slightly absentminded club curator.
Hathaway Browne: A dashing aviator and unapologetic ladies’ man.
Samantha Sterling: The beautiful adventuress.
Emil Bleehall: A junior adventurer and proud citizen of Sandusky, Ohio. His costume is reminiscent of a Boy Scout uniform.
Emil Bleehall, Sr: Emil’s dad. A new character that popped up in the last few weeks to cheer for his son and cause mischief.
Graves: The “oh so proper” and ever diligent club butler.
The Maids: Wearing a French maid’s outfit, this character’s name changes depending on the actor playing her and has included Sugar Snap, Beaulah, Anelle and others.
Madame Zarkov: A mysterious gypsy, she is an occasional visitor to the club, especially around Halloween.
Colonel Critchlow Suchbench: This large-sized puppet in red is king of the double entendres and leads the singing of the club song.
The Goddess Babylonia: A giant stone face that hangs in the Main Salon. She awakens periodically throughout the night to talk to guests and characters.
Beezle: the genie that appears only as a floating head inside the big cabinet in the Treasure Room.
Arnie and Claude: Two masks that awaken and interact with guests in the Mask Room.
Fingers Zambeezie: The haunted organ that accompanies all songs in the Library. He appears to have fallen through the second story floor and looks a little worse for wear.
The Yakoose: This part yak and part moose head is mounted on a wall in the Main Salon across from Babylonia, where he sometimes moves and even talks – especially later in the evening.

The Library: The largest room in the Club, this is where the main stage shows are presented. These can include …

Nightly Shows:
The Welcome Party: Hosted by Samantha Sterling and Fletcher Hodges to welcome everyone to the Club, includes several songs by each.
The Radio Broadcast: This one stars Otis T. Wren and Pamelia Perkins in a very scattered version of an old radio broadcast. There aren’t any songs, but plenty of plugs for Jenkies cereal.
The Balderdash Cup Competition: Hugely popular and very nutty. In a contest to see who is the Adventurer of the Year, Club members Otis and Hathaway Brown compete with newcomer Emil Blehall in telling stories of their daring feats. Emil almost always wins this one due to his talented pigeon friends.
Radiothon: Another radio broadcast theme, this one includes a musical talent show to help the Club raise the funds needed to keep from losing its lease.
Samantha’s Cabaret: Just as it sounds. Here, Samantha performs some of her best show-stopping numbers.
Hoopla: The evening’s grand finale with several big musical numbers including When the Saints Go Marching In where each character ad-libs their own verse. Hooplas can also be themed based on the current holiday season.

Special Shows:
Halloween Jubilee: In addition to Halloween carols from Otis, Hathaway, and Pamelia (or sometimes Madame Zarkov), Emil accidentally causes the conjuring of an evil spirit that has to be vanquished.
Holiday Broadcast: Highlights include Christmas songs from Pamelia, Hathaway, and the Maid, and the telling of Dominick the Christmas Donkey by Pamelia and Emil.

The Treasure Room: A very small room where short sketches are presented, usually while a main show is going on in the Library. This is also the home of Beezle the genie.

The Mask Room: Several short shows are presented in this aptly named room, which houses masks of all sizes, many which move and laugh. But only two – Arnie and Claude – actually talk.

The Main Salon: Site of the Induction ceremonies, the Salon is also home to the Colonel, Babylonia, and the Yakoose. The cast wanders in for various short sketches and hugely popular songs such as Emil’s very fast and very funny French Toast song.

We climb the highest mountains,
just to get a better view.
We plumb the deepest oceans,
cause we’re daring through and through.
We cross the scorching desert,
martinis in our hand.
We ski the polar ice caps,
In tuxedos looking grand.
We are reckless, brave and loyal,
and valiant to the end.
If you come in here a stranger,
You will exit as a friend.

• There is a Hidden Mickey on the welcome sign inside the Club.
• There are certain songs, sketches, and even characters that are not done every night, but are sometimes done on request (like Emil’s French Toast song, or the rare appearance of the Colonel’s small puppet friend Slappy.)
• The upstairs desk has messages in its drawers.
• Some of the artifacts sprinkled throughout are actually merchandise that guests used to be able to buy at the Club.
• Fingers Zambeezie, the haunted organ, can shoot air jets from the stage. Fingers also has a Hidden Mickey, but sometimes shoots air jets at those who get too close!
• The Jenkies cereal box used in the radio show features Hathaway Browne on the back.
• The Jenkies themselves are actually lima beans that get spilled during the show. Almost all regular guests have at least one in their collection.
• Guests who help out in shows get Adventurer Club member pins. There have been at least seven designs over the years and the older ones are heavily sought after.
• When the characters are “schmoozing” with the guests, they’re often gathering information for use later in the night. For example, if Pamelia finds out there are plumbing convention people in town, Babylonia may make jokes on that theme when she awakens, as will other characters. This also happens for sport teams that are in town, birthdays and anniversaries. “And many marriage proposals by guests have been worked into shows!” said Held.

one note about Emil Bleehall Sr: long time Adventurers Club members will note that his costume is actually an earlier version of Emil (Jr)’s costume…and Sr was generally played by long(er) time members…

Get a taste of New Orleans through...

A look at Downtown Disney’s first ever...